Pro Kabaddi: A Strong Start, but the Need for Improvement

The PKL has got off to a rousing start, but it needs to do a lot more to attract crowds 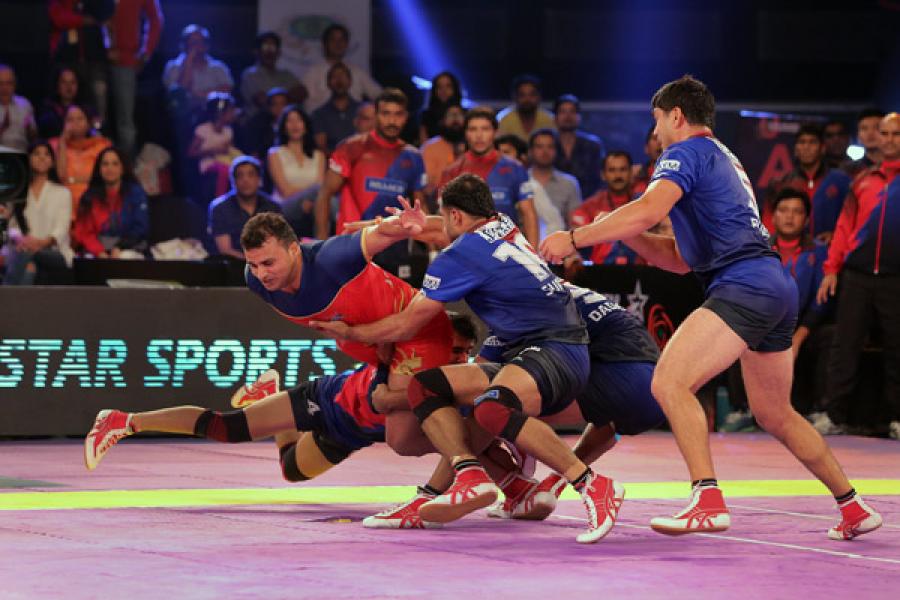 The machines spew smoke. As they clear the air, a throng of men in vivid and bright colours circle the stadium waving in what seems like a victory lap. The problem: the match hasn’t started yet. This is where the Pro Kabaddi League (PKL) finds itself. Basking in the light as the tournament that has brought India’s national sport back in the forefront, the Pro Kabaddi League has attracted a plethora of Bollywood stars (Shah Rukh and Aamir Khan were spotted together) with some going as far as buying teams (Abhishek Bachchan). Nevertheless, despite its pomp and hype, when I went to watch a match at Mumbai’s NSCI (National Sports Club of India) Stadium, I found a significant section of the seats, which were reasonably priced at Rs 200, empty. What can Mashal Sports and the PKL Team do to raise interest and make the PKL a viable league? Here are some recommendations:

1. Turn it into a Real League, not just a two-month tournament designed to make owners rich.
Indian sports have a tendency to heavily copy and draw from one another with the absence of creativity. For example, the IPL (Indian Premier League) has led to the heavily awaited ISL (Indian Super League) and the PKL (Pro Kabaddi League). Each one has been strategically placed during different months of the year to maximise user interest (the IPL during the summer, the PKL in the monsoon and ISL taking place in September-October). However, this results in a two-month flirtation with a sport and its evaporation from the horizon for 10 months later. Instead, I would recommend that the PKL use the NFL (National Football League-American Football, similar to Rugby) as a model instead. With games once a week (on Sundays), Americans retreat in their Living Rooms watching 32 teams duke it out over a period of four months, resulting in the most watched sporting event annually, the Super Bowl. The Super Bowl does not have a yearly auction, which dilutes interest in teams and increases interests in players. Instead, a period known as free-agency ensues fan interest in the league during the off-season, watching player negotiations and deals play out over a series of weeks. Coupled with an All-Star Game (known as the Pro-Bowl), a round-robin draft where new players are selected by teams in the order of worst record and a month-long training camp and pre-season, the NFL has turned into the world’s most valuable league with revenues of over $6 billion last year. The PKL has a chance to eventually eclipse that given India’s population (over 1.2 billion people) and its potential global reach.

2. Make it a global game
Kabaddi is already extremely popular in South Asia (it is the national game of Bangladesh known as Hadudu); the NFL’s popularity is largely limited to the US. Furthermore, the game has spread to Southeast Asia, Japan and Iran. Players from Kenya, Oman and Turkmenistan are currently playing in the PKL and this is just scratching the surface. Kabaddi neither requires expensive equipment nor does it require large or specialised playing surfaces, thus being extremely appealing to developing countries. As the game spreads, the potential for lucrative revenues increases, resulting in a win-win situtation. The PKL and the IKF (International Kabaddi Federation) should push for more international tournaments and sporting events. It is currently played at the Asian Games, which has led to the growth of the sport in Asia. Next stop, the Commonwealth Games and the Olympics. Make it happen, IKF.

3. Make the rules clear
As a foreigner watching the match for the first time, I had no idea what to expect. Given the variations in kabaddi played across India, it is vital for the PKL to consistently disseminate the official rules in concert with the IKF and stick to them, rather than the constant tinkering that has crippled many sports. It should also make those rules clear to fans that may be tuning in for the first time or those who have played with variation. The PKL is not just entertainment; it also has a responsibility to establish norms given its reach. A fun recommendation: The PKL should play matches on sand and with oil to make the game as “authentic” and “village-grown” as possible.

4. Youth are key
If the PKL and the sport of kabaddi are to be sustained, it will depend highly on the youth and their development. As a model, I would look to the Major League Baseball’s Minor Leagues or to Football’s Academy System as places for inspiration. Youth and amateurs play in Tier II and Tier III cities as part of these leagues. This allows those who live in less urban areas to watch live sport while also giving franchises and subsequently India, a talent pool to lean on.

5. Institute a unique fan experience
What really grows a sport is not just the actual match but also the fan experience that accompanies it. A game of summer baseball is known for Hot Dogs and Coke. American Football is known for its hallmark Fantasy Game and basketball is known for its Instant Replay. Here, too, the IPL has been extremely successful broadcasting all of its games on YouTube at one point. Similarly, the Pro Kabaddi League has to utilise technology along with the fact that it can be played indoors to enrich the fan experience whether it be with the introduction of unique half-time shows besides five-minute interviews with Star Plus TV Stars (as what happened when I visited a match between U Mumba and the Telegu Titans) and instead give artists (acrobats, magic and the like) a unique platform to showcase their talents or the introduction of games (fantasy football is a great source of inspiration) and specific fan gear.

The PKL has got off to a rousing start, but in order for it to grow and turn into a sustainable league it must carry the humility and perseverance to stick to its guts. IT should restrain itself from becoming an identical mirror of its controversial cousins, the IPL and the ISL, and instead look beyond its borders to grow India’s ancient sport.

Tweets by @forbes_india
Are You Optimally Distinctive?
Facebook's Social Experiment: A Marketer's Perspective