Raytheon Technologies, the defense contractor, reset the stock price it would use to calculate certain compensation for its chief and other employees

By Peter Eavis and Anupreeta Das 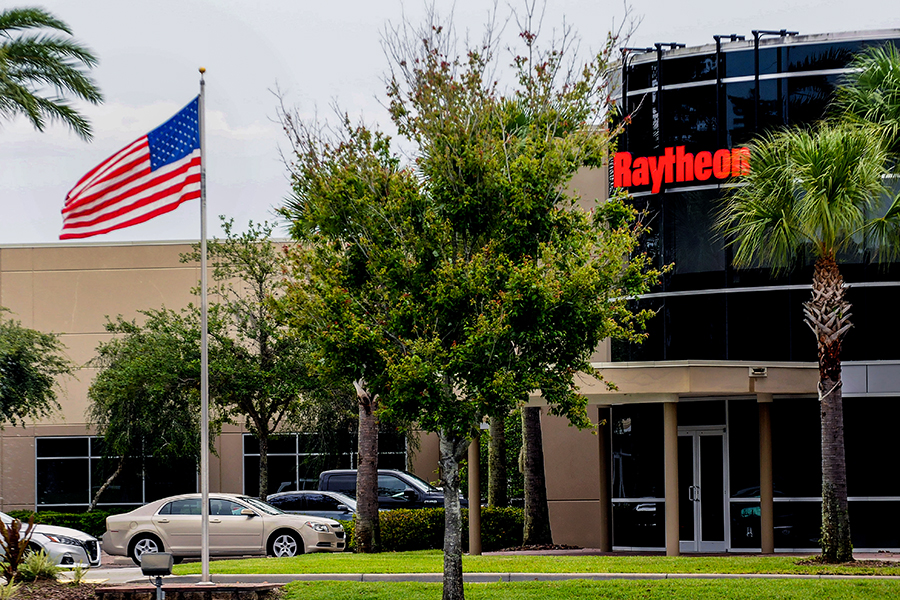 A Raytheon facility is seen on June 10, 2019 in Orlando, Florida. The Raytheon Co. and United Technologies Corp. have announced a merger, creating a new defense and aerospace company called Raytheon Technologies Corp. (Photo by Paul Hennessy/NurPhoto via Getty Images)


Raytheon Technologies, one of the country’s biggest defense contractors, recently cut salaries for thousands of employees as the pandemic crimped business. Around the same time, it also quietly made a change to the pay package of its chief executive, Gregory Hayes, that could increase his future income by millions of dollars.

Last Friday, after the market closed, Raytheon disclosed in a filing that it had tweaked how it calculates certain stock-related payouts owed to senior executives and employees. The filing did not state by how much Hayes or others stood to benefit.

The change led to an estimated $12.5 million gain for Hayes on his recent equity awards, Raytheon later told The New York Times. The company said the change was necessary to ensure that Hayes and 3,900 employees — about 2% of its workforce — did not lose compensation they had already been awarded.

But some analysts said the change undermined Raytheon’s commitment to use pay to keep executives’ interests in line with those of shareholders. Publicly traded companies have come under pressure to structure stock-related compensation in a way that creates incentives for executives to improve long-term performance and not just seek to enrich themselves in the short term.

At Raytheon, “short-term volatility seems to be driving the decision-making around these long-term compensation objectives,” said Brett Miller, head of data solutions for the responsible-investment arm of Institutional Shareholder Services, a shareholder advisory firm.

In recent years, the compensation of chief executives of big, publicly traded companies has risen steadily, despite efforts by lawmakers to restrain CEO pay. The median boss received compensation of $18.6 million in 2018, an increase of 6.3% from the previous year, according to a study conducted by Equilar for The New York Times last year. Ordinary wages of company employees rose far less.

The stock-related awards that Raytheon amended were part of Hayes’ compensation when he was chief executive of United Technologies. In late 2018, United Technologies said it would spin off two units — Carrier, a heating and cooling equipment business, and Otis, which makes elevators — and last year agreed to merge its remaining aerospace business with Raytheon, which helps make F-35 fighter jets. Hayes took over as the chief executive of the combined company, which started trading in April as Raytheon Technologies.

Raytheon’s recent adjustment, which analysts say is rare, reveals the leeway that companies have to shift the goal posts when setting compensation. More than a decade ago, the backdating of stock options at certain companies — when executives picked earlier dates for the price at which their options could be exercised, making them more valuable — created a corporate scandal and led to penalties.

Raytheon representatives say they made the adjustment for the sake of fairness. However, the timing, when a majority of the company’s workforce is being called on to make sacrifices, highlights the different standards that can apply to certain employees and top executives. In addition to pay cuts of 10%, Raytheon is furloughing many of its 195,000 employees and cutting billions of dollars in costs, after the pandemic brought global air travel to a near standstill. Hayes has also volunteered to take a 20% pay cut — but to his $1.6 million salary, which is a small part of his pay package.

Companies use a variety of stock compensation as part of the pay of senior employees, and these so-called equity awards are usually worth far more than the base salary.

Hayes’ compensation at United Technologies included performance and restricted stock units, which typically give the holder the right to get shares after certain operating and stock return targets are met, and stock appreciation rights, which are similar to stock options. If, at the time of vesting, the price of the stock is below the price at which the option or appreciation right is set, those awards are considered to be underwater.

That is not expected to happen in Raytheon’s case, because many believe the newly merged defense and aerospace giant will capitalize on its dominant position and do well as the economy recovers. Analysts forecast that earnings at Raytheon will surge 25% in 2021 from this year’s level and that its stock will go up 17%.

In fact, Raytheon’s stock price jumped 30% in the first few days of trading in April. Normally, a rising stock is an unalloyed benefit for executives earning share-based compensation, but because of the intricacies of the United Technologies merger, it left Hayes and others with less than they hoped to get.

As part of the merger, Raytheon had to recalculate how the United Technologies stock-related awards given to Hayes and others since 2018 would convert into stock units and appreciation rights issued by the new company. To do that, the United Technologies board initially decided it would base a stock price for the conversion on the fourth and fifth days of trading of the new company — under the assumption that any volatility associated with a new stock would settle by then.

However, the stock’s value jumped from $51 to $64 between the first and fifth days of trading, creating an odd situation. Because the number of stock units and rights to be given out was determined by dividing the last United Technologies stock price by the preselected Raytheon stock price, the jump left recipients with fewer shares than they would have gotten had the company picked the lower price.

To remedy that, Raytheon instead switched to the lower $51 price at which the stock started trading, the company said last week. The upshot was that Hayes and the other employees received additional shares and appreciation rights. When that happens, the holdings of existing shareholders of the company are diluted, which critics say can have the appearance of favoring a small subset of shareholders at the expense of the larger group.

Raytheon said many other employees had benefited from the change, bolstering their combined stock-based compensation by just over $200 million. It said it had made the amendment to reduce some of the losses that employees might otherwise have suffered as a result of the way the post-merger stock conversion worked.

“This decision, applied in the same manner across the equity awards of almost 4,000 legacy United Technologies employees, was made to reduce some of the losses that would have otherwise been suffered by dedicated employees whose hard-earned equity is being converted from United Technologies to Raytheon Technologies,” a representative for Raytheon said in a written statement.

But Carrier and Otis, the two spun-off subsidiaries, decided not to make the change that Raytheon did.