After a staff uproar, The Times says the editing process was "rushed." Senator Tom Cotton's "Send In the Troops" essay is now under review 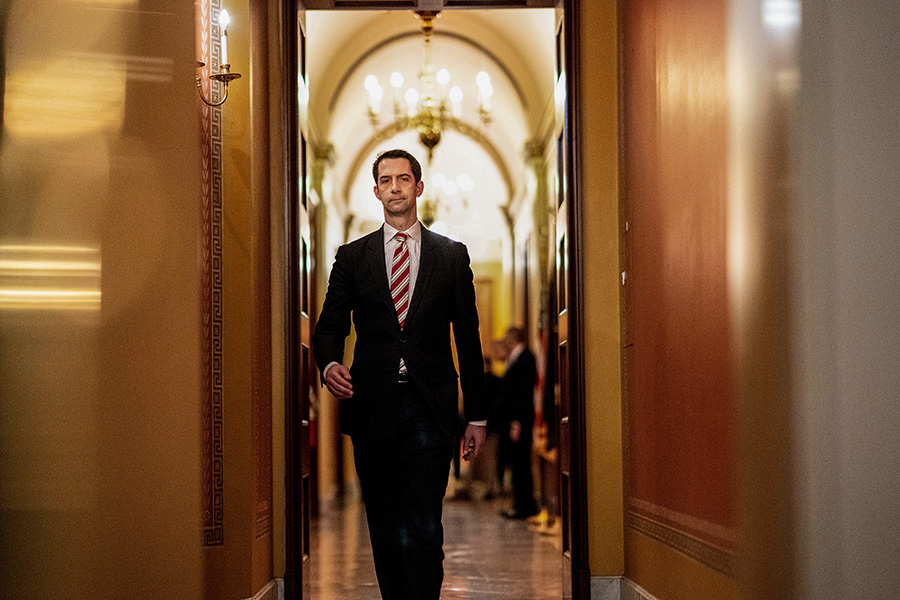 Executives at The New York Times scrambled Thursday to address the concerns of employees and readers who were angered by the newspaper’s publication of an opinion essay by a U.S. senator calling for the federal government to send the military to suppress protests against police violence in American cities.

James Bennet, the editor in charge of the opinion section, said in a meeting with staff members late in the day that he had not read the essay before it was published. Shortly afterward, The Times issued a statement saying the essay fell short of the newspaper’s standards.

“We’ve examined the piece and the process leading up to its publication,” Eileen Murphy, a Times spokeswoman, said in a statement. “This review made clear that a rushed editorial process led to the publication of an op-ed that did not meet our standards. As a result, we’re planning to examine both short-term and long-term changes, to include expanding our fact-checking operation and reducing the number of op-eds we publish.”

The op-ed, by Tom Cotton, R-Ark., was posted on the Times website Wednesday afternoon with “Send In the Troops” as its headline. “One thing above all else will restore order to our streets: an overwhelming show of force to disperse, detain and ultimately deter lawbreakers,” the senator wrote.

More than 800 staff members signed a letter protesting its publication, according to a union member involved in the letter. Addressed to high-ranking editors in the opinion and news divisions, as well as New York Times Co. executives, the letter argued that Cotton’s essay contained misinformation, such as his depiction of the role of “antifa” in the protests.

Dozens of Times employees objected to the op-ed on social media, despite a company policy that instructs them not to post partisan comments or take sides on issues. Many of them responded on Twitter with the sentence, “Running this puts Black @NYTimes staff in danger.” More than 160 employees planned a virtual walkout for Friday morning, according to two organizers of the protest.

Conversation and debate filled videoconference meetings for many newsroom departments Thursday. The newspaper scheduled a town hall meeting for Friday to allow employees to express their concerns to company leaders, including A.G. Sulzberger, the publisher; Dean Baquet, the executive editor; and Bennet, the editorial page editor.

Bennet said in a video meeting attended by Sulzberger and employees late Thursday that he had not read Cotton’s essay before it was published, according to two people who were present.

On Thursday morning, Sulzberger had sent an email to the staff backing the op-ed’s publication.

“I believe in the principle of openness to a range of opinions, even those we may disagree with, and this piece was published in that spirit,” he wrote. “But it’s essential that we listen to and reflect on the concerns we’re hearing, as we would with any piece that is the subject of significant criticism. I will do so with an open mind.”

He added, “We don’t publish just any argument — they need to be accurate, good faith explorations of the issues of the day.”

On Thursday night, Sulzberger struck a somewhat different tone in a Slack message sent to company employees. He said that “a rushed editorial process” led to the publication of an op-ed “that did not meet our standards.” He added that an editor’s note from the newspaper’s standards department was on its way.

“Given that this is not the first lapse, the opinion department will also be taking several initial steps to reduce the likelihood of something like this happening again,” Sulzberger said. He added that the opinion section would “rethink op-eds, generally” for the social media age.

Bennet had also defended publishing the op-ed early Thursday, saying in an article published on the Times website that he disagreed with Cotton’s opinion but believed that it was important to publish views that ran counter to his own.

“It would undermine the integrity and independence of The New York Times if we only published views that editors like me agreed with, and it would betray what I think of as our fundamental purpose — not to tell you what to think, but to help you think for yourself.”

Through a Times spokeswoman, Sulzberger and Bennet declined requests for interviews.

The op-ed was handled by Adam Rubenstein, an editor in the opinion section, according to staff members in that department. Several of them said they had not been aware of the article before it was published.

During the editing process, Rubenstein asked a photo editor, Jeffrey Henson Scales, for photographs of state and federal forces who were sent to the University of Mississippi in 1962 to quell segregationists protesting the enrollment of the first African American student at the school. Cotton had cited the military’s role in desegregation to make the case for sending troops into the streets.

Scales raised an objection. “A false equivalence, but historical images are there now,” he wrote to Rubenstein on Slack, the internal messaging software used by Times employees.

“Yeah, there are a few in there,” Rubenstein responded, adding an emoji of a frowning face.

Scales objected again in the opinion section’s Slack channel shortly after it was published online, calling the op-ed “highly inappropriate.” At the time he was unaware that the essay had already appeared online, he said in an interview.

Rubenstein referred a request for comment to a spokeswoman, who did not reply to inquiries.

In a video meeting of the opinion department Thursday afternoon, Bennet and James Dao, the deputy editorial page editor, acknowledged that there had been a breakdown in the process of preparing the essay for publication, according to four people who attended it. The editors said that the article had been fact-checked but added that they would fact-check it again. Dao did not reply to a request for comment.

Baquet, the executive editor, who oversees the news division, which is run separately from the opinion department, said he heard from a number of reporters and editors who believed that the op-ed did not meet the standards of The Times.

“When my newsroom is agitated, I respond to that,” he said.

He acknowledged that some readers might not be aware of the wall separating the news and opinion departments. He said he first saw the op-ed when it was posted online.

“I’ve had very sophisticated people say to me, ‘I had no idea that opinion and news were separate,’” he said, adding, “I don’t think we’ve always done the best job in the world explaining that to people and making the distinction.”

Baquet declined to comment on the substance of the op-ed but said he agreed with those who believe the opinion section should include a wide range of views.

In the days leading up to the op-ed’s publication, Cotton called for military action against what he saw as violent protests in a series of tweets. In one he called for “No quarter for insurrectionists, anarchists, rioters, and looters.” Giving “no quarter” to enemy combatants is considered a war crime in modern international conflicts, under a statute of the International Criminal Court.

On Thursday, the senator tweeted his praise for Times leadership: “They ran my piece — even if they disagreed with it — and stood up to the woke progressive mob in their own newsroom.”

But after The Times said the op-ed did not meet its standards, Cotton’s office put out a statement: “We weren’t contacted by The New York Times in advance of this statement and our editorial process was similar to our past experiences at The New York Times and other publications. We’re curious to know what part of that process and this piece didn’t meet their standards.”

The senator had previously contributed to the opinion section, arguing last year that the U.S. should buy Greenland.

Cotton has also clashed with Times editors. In 2006, as an Army lieutenant serving in Iraq, Cotton called for the prosecution and imprisonment of Bill Keller, then the executive editor of The Times, and two of the paper’s reporters, Eric Lichtblau and James Risen. He accused them of violating espionage laws in reporting how U.S. counterterrorism officials had uncovered the funding schemes behind al-Qaida and other terrorist groups.

The national mood has been brought to a boil by a polarizing presidency, a once-in-a-century pandemic and the protests touched off by the death of George Floyd, a black man who was killed in police custody in Minneapolis last month.

Bennet served as the paper's Jerusalem bureau chief before taking a job as the editor-in-chief of The Atlantic in 2006. He returned to The Times, as its editorial page editor, in 2016. He has hired several young writers for the opinion section, many of them with expertise in the tech industry, and added more conservative voices. Last year, Brent Staples, a member of the opinion staff, won a Pulitzer Prize in editorial writing for a series of columns on race and America.

Bennet’s tenure has had its bumps. Last year, a federal appellate court found that Sarah Palin, a former vice presidential candidate, could proceed with a defamation lawsuit against The Times over an editorial edited by Bennet that inaccurately linked her statements to the 2011 shooting of a U.S. congresswoman.

Two years ago, Bennet hired a journalist as the opinion department’s lead tech writer, only to rescind the job offer after a social media storm over her past use of slurs and friendship with an internet troll who had worked for a neo-Nazi website.