Flanked by the family of Mr. Floyd, the Rev. Al Sharpton said, "It's time to stand up and say, 'Get your knee off our necks.'" 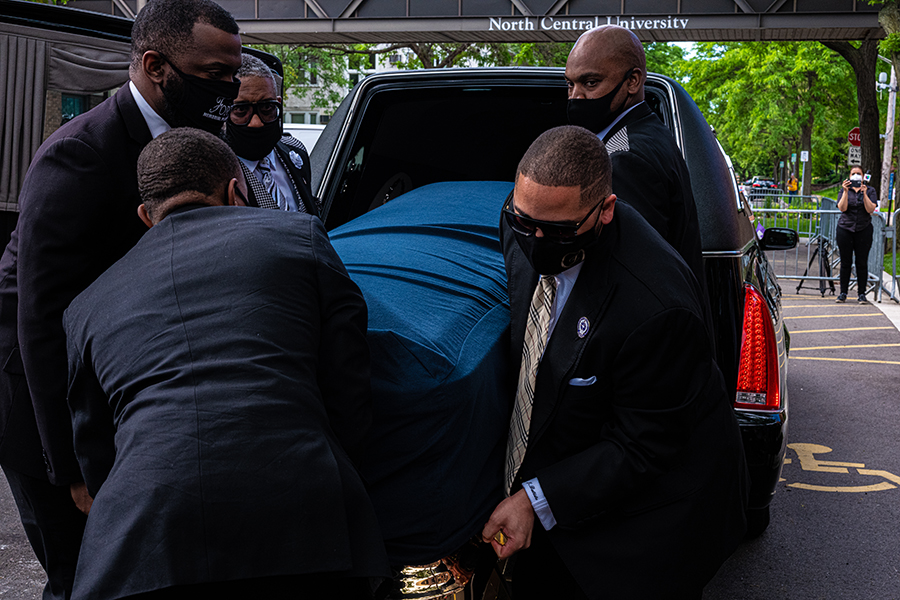 Mourners carried the coffin of George Floyd on Thursday, June 4, 2020, to the site of a memorial service in his honor in Minneapolis. Floyd, an African-American man, died in Minneapolis police custody. (Joshua Rashaad McFadden/The New York Times)

MINNEAPOLIS — Hundreds of people filed into a Minneapolis chapel on Thursday to remember George Floyd, the man whose death at the hands of police opened a nationwide flood of anguish, protest and demands for change in American policing.

By turns somber and defiant, the mourners celebrated Floyd as a friend and father and uncle to those closest to him, but also as a victim of racial injustice whose killing had drawn a legion of people to the streets.

“George Floyd’s story has been the story of black folks,” the Rev. Al Sharpton said in a eulogy of Floyd, who died after a white police officer held him down on a Minneapolis street with a knee to Floyd’s neck for nearly nine minutes. “Because ever since 401 years ago, the reason we could never be who we wanted and dreamed of being is you kept your knee on our neck.”

The gathering, the first of several memorials for Floyd in different cities in the coming days, drew Floyd’s family members, political leaders, civil rights leaders and celebrities — many in masks out of concern for the coronavirus.

“It’s time to stand up and say ‘get your knee off our necks,’ ” Sharpton went on, as raucous applause broke out in the university sanctuary where Floyd’s body rested inside a closed, shiny copper coffin.

All the while, marches were taking place around the country Thursday, as thousands of people in cities far from Minneapolis poured into parks and streets calling for an end to systemic racism in the justice system on a 10th day of protests. Demonstrators marched in cities including New York; Nashville, Tennessee; Seattle; and Santa Monica, California. And around the country, people watched the eulogy to Floyd on television and online.

The two-hour service served as a call for activism after more than a week of upheaval prompted by the video of the police officer kneeling on Floyd’s neck.

In a service punctuated by gospel music, Floyd’s relatives told personal stories, of the man they knew as Perry and whom people in the neighborhood had called “Big Floyd.”

On Saturday, Floyd is to be remembered in Raeford, North Carolina, where some of his family lives, and another memorial is planned Monday in Houston, where Floyd lived for many years.

Tweets by @forbesindia
New York Times says senator's Op-Ed did not meet standards
In the post Covid-19 era, an opportunity to build back better