The Tata Group's steelmaking arm battled severe headwinds at its Indian and European operations with demand and prices under pressure due to a weak economic environment, surge in cheap imports of Chinese steel and relative currency movements 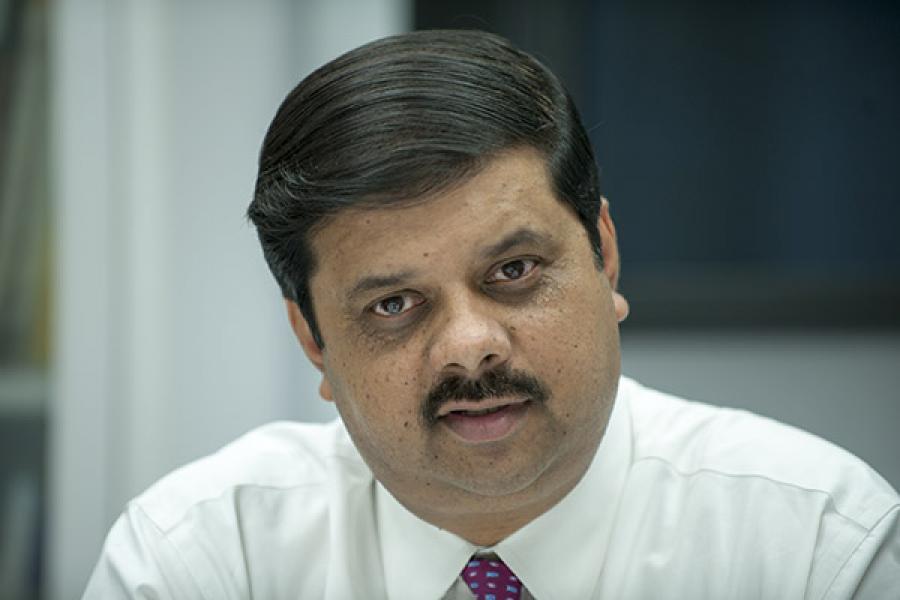 Image: Dinesh Krishnan
Koushik Chatterjee, group executive director (corporate and finance), Tata Steel
Tata Steel, the steelmaking arm of the salt-to-software Tata Group, posted a 22 percent year-on-year increase in consolidated net profit for the quarter ended September 30, 2015, to Rs 1,529 crore, aided largely by an exceptional gain on the sale of shares in quoted investments, including group company Tata Motors Ltd.
The steelmaker posted a consolidated turnover of Rs 29,305 crore during the quarter, a decline of 18.08 percent over the previous year. The company’s core earnings before interest, tax, depreciation and amortisation (Ebitda excluding one-off gains/losses) halved to Rs 1,371 crore during the same period. The company’s profitability could have appeared even worse, had it not been for an exceptional income of Rs 2,983 crore that it earned during the September quarter on account of sale of investments as cited earlier.
Tata Steel reported a series of exceptional items in its financial statement for the quarter. The most notable among them is a provision for the impairment of non-current assets to the tune of Rs 7,924.30 crore (largely to reflect the diminution in the value of its holding in Tata Steel Europe’s business in the UK, which has been struggling for a while now despite several rounds of restructuring. The company also provided for a sum of Rs 1,172 crore on account of provision for demands and claims and employee separation compensation - in connection with its Indian business).
The impact of these provisions on Tata Steel’s bottomline could have been more adverse, but for a credit of Rs 8,602 crore in the company’s income statement. This substantial credit was a result of the agreements that it had reached with workers’ unions at its European operations in the UK and The Netherlands regarding a reworked pension scheme.
The net impact of these various provisions was a notional outgo of Rs 563.74 crore. The Indian and global steel industry, and players therein like Tata Steel, have been facing severe headwinds for a while now and the near-term outlook isn’t any better. Some of the local and global factors that have impacted the demand and prices of steel include a slowdown in manufacturing activity in India; a deficient monsoon that has crippled rural demand; a surge of cheap steel imports from China, which is facing a slowdown and is laden with excess steelmaking capacity, into regions such as India and Europe; a relatively stable rupee vis-à-vis other currencies that have been depreciating and which have made it more attractive for steel users to import the commodity.
Despite these headwinds, the Indian operations of Tata Steel reported a 9 percent year-on-year to 2.33 million tonnes. The core Ebitda from the Indian operations rose by 14 percent year-on-year to Rs 1,963 crore. The core Ebitda per tonne reported by the Indian operations was Rs 8,500 per tonne during the quarter.
Tata Steel’s European business, however, continued to fare poorly. “Market conditions in Europe, primarily in the UK, significantly worsened in the quarter as the UK continues to witness surge in imports and declining competitiveness of the manufacturing sector due to weak industrial demand, strengthening of the sterling pound and adverse regulatory and business conditions,” a statement issued by Tata Steel after market hours on Thursday said. The European business reported an operating loss of Rs 948 crore. Challenges at Tata Steel’s European business have been continuing despite three rounds of restructuring undertaken by the company, which has seen 2,000 jobs being axed in a bid to save costs.
Karl-Ulrich Köhler, MD and CEO of Tata Steel Europe, said further measures to rationalise costs at Tata Steel’s European operations, especially in the UK business cannot be ruled out, though it was too early to speak about these measures.
Tata Steel had a consolidated net debt of Rs 73,000 crore on its books as on September 30, 2015, and Koushik Chatterjee, group executive director (corporate and finance), Tata Steel, said the company had repaid around Rs 7,000 crore of its borrowings during the current fiscal till date.
Chatterjee also said Tata Steel has raised funds to the tune of Rs 4,200 crore in the first six months of fiscal 2015-16 by monetising non-core assets.

Tweets by @forbesindia
Government launches gold schemes to reduce import bill, will it work?
Why did Arun Jain sell Polaris Consulting and Services?