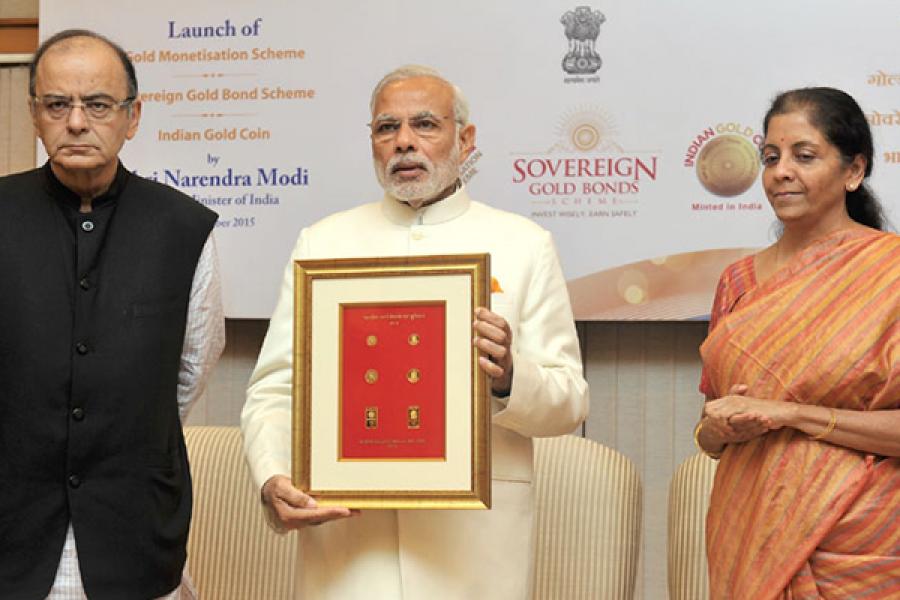 Image: PIB
Prime Minister Narendra Modi launched three gold-related schemes on 5th November 2105 in New Delhi and said that the idea is to urge Indian women, the primary drivers of gold consumption, to invest in these schemes

Prime Minister Narendra Modi launched three gold-related schemes on Thursday in a bid to rein in the country’s appetite for the yellow metal. The three schemes—namely, the Gold Monetisation Scheme (GMS), Gold Sovereign Bond Scheme and the Gold Coin and Bullion Scheme—will help curtail gold imports and utilise at least 20,000 tonnes of the precious metal owned by Indian households.

Modi said the idea is to urge Indian women, the primary drivers of gold consumption, to invest in these schemes. “Women usually do not own anything... a house or a car is usually owned by their husbands or sons, but gold is a matter of their strength,” he said, while also launching the country’s first national gold coin engraved with the Ashok Chakra. The Ministry of Finance has added that the gold would be secure. “Gold is already the savings vehicle of choice for many households and it is essential to tap the institutional market by giving savers an option to hold these savings within the formal financial system, transparently,” said Somasundaram PR, managing director, India, World Gold Council. “This will bring a range of collateral benefits to the industry by significantly raising infrastructure standards and ensuring trust in the industry and in gold.”

The government’s goal is to reduce the country’s burgeoning current account deficit (CAD), which is the difference between total exports and imports. India’s CAD widened to $6.2 billion in the April-June quarter as exports remained lack-lustre and foreign investments dropped. With gold imports inflating the CAD, last year the government was prompted to restrict imports; the restrictions have hence been lifted. India is the world’s highest consumer of gold, buying 562 tonnes compared to China’s 548 tonnes.

But will these gold schemes work? “These schemes could help on the margin but they do not address the underlying problem, which is households’ need for alternative assets for their portfolio diversification,” said Jahangir Aziz, chief Asia economist, JPMorgan. Experts believe the psychological and sociological compulsions that make Indians hoard gold can be broken if the price is right. But along with gold schemes, the need of the hour is to expand the secondary market in corporate bonds, have inflation-linked bonds in much bigger size and improve the price of state government bonds. “We will get used to trading various state government bonds if the market is developed enough for households to have confidence,” said Aziz.

And there are no quick results. “These schemes will be transformative for the Indian gold industry. However, expectations from the schemes in the short term must be tempered, as it will take time to build the infrastructure and products and for customer acceptance to grow,” said Somasundaram. A word of caution from analysts for the short term: If the US Federal Reserve hikes interest rates, then global commodity prices will drop, leading to a fall in gold prices as well.