Kavin Mittal goes his own way

The 28-year-old stayed away from the Bharti mothership, and established himself as one of India's most-talked about social media entrepreneurs 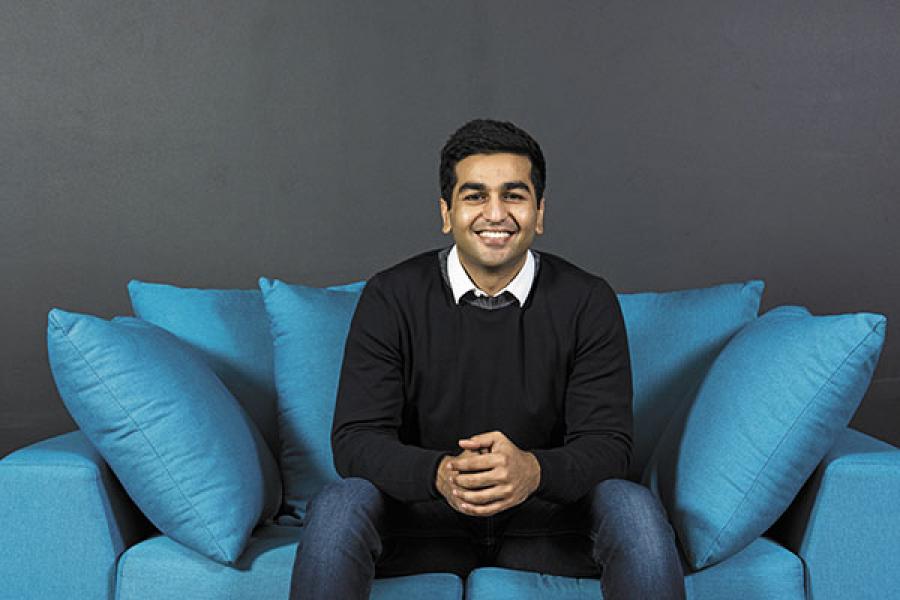 At any point of time, Kavin Bharti Mittal has two phones with him: One will always be the latest iPhone and, currently, the other is the far more economical $120 MotoE. The latter is his primary instrument to monitor the running of his messaging app, Hike Messenger.

Make no mistake: Hike is not just an app for Mittal. It is his carefully crafted means to a much-desired end: To bring the internet and its benefits within reach of thousands of Indians who are yet to discover the wonders of the World Wide Web. It is with this motive that Hike was launched, on December 12, 2012, as a separate entity from his father Sunil Mittal’s Bharti Enterprises. It was, however, initially funded by Bharti SoftBank to the tune of $7 million in April 2013 and $14 million announced in March 2014. Later in August 2014, Tiger Global made an investment of $65 million.

The signs were positive from early on, as the rise in subscriber base indicates. By February 2013, for instance, Hike had grown 10 times week-on-week and breached the 5 million-user milestone in April 2013. As of this January, it has more than 100 million users exchanging over 40 billion messages per month. “We believe that messaging will do for mobile what the browser did for the desktop, but will do it in a way that will be 100 times better,” says Mittal (28), sitting in his swanky new office in Aerocity, Delhi.

Investors seem to agree with his vision. This January, the company announced that a clutch of Silicon-based tech veterans have invested in the app and will also be advisors. One of them, Matt Mullenweg, founder and CEO, Automattic Inc, and co-founder, WordPress, says by email: “As an online social media entrepreneur myself, I have keenly observed India. I believe in Hike Messenger’s vision, and it’s well positioned for aggressive growth in the country.”

Now, while Hike is the baby Mittal has chosen to nurture, it isn’t his first-born. That was AppSpark, an app company he set up in 2008 while still in his final year at Imperial College, London; he was just 20 then.

In 2009, the company launched Movies Now, a movie-ticketing app on the iPhone (with an iPad variant called Movies Now HD), in collaboration with movietickets.com. Apple soon recognised Movies Now as ‘One of the 10 Essential Movie Goer Apps’ for the iPhone due to its attention to user experience and design.

But Mittal soon got bored of movie and food apps. He wanted to do more. He wound up AppSpark and headed home in early 2011. Once back, he didn’t waste much time in pursuing his dream of bridging the gap between much of India and the internet. Enter Hike.

Today, the app is without doubt his only focus. Even while talking to us, Mittal seldom digresses. There is no time to chitchat about hobbies and life after work. His plans, simply put, are ambitious.

He is expanding the ambit of the app that, to begin with, targeted the below-25 age group, with options of private chats and quirky, localised stickers. Cut to today and, as Mittal puts it, “I recently met a 13-year-old Hiker and a 50-year-old Hiker.”

He also wants to position Hike as a one-stop-shop for every need: For messaging and calling, to use and share discount coupons with friends, to get cricket scores, for daily quotes, facts and humour, to stay updated on news about the latest Hike features and, in future, help organise the user’s daily life with the help of an executive assistant. Something like iPhone’s Siri, but Mittal calls her ‘Natasha’. “We tried both male and female versions; the latter was more popular,” he says. This is the result of Hike’s efforts to improve artificial intelligence, already at work on the messaging app along the lines of Google Now.

Users who have basic smartphones with limited memory often find it difficult to accommodate several apps as well as the constant updates. “We believe the app model is completely broken; it will not scale. It has too much overhead,” says Mittal. He, therefore, plans to build on the app through microsites. Hike already has a partnership with Cricbuzz for cricket scores and is open to talking to taxi service apps like Ola and Uber. Even ecommerce on its platform is an option. “Hike is a startup of startups. Over time it should become an open platform. Anyone should be able to build on Hike,” says Mittal.

When asked if he hopes to surpass Whatsapp as the instant messaging app of choice, Mittal dismisses the notion of even being in competition with Jan Koum’s creation.

Hike is more of a lifestyle application, he points out. From facilitating offline chats to sending free SMS to non-Hike numbers, Mittal is trying to attract users that may or may not be on Whatsapp. “If you want to send simple texts and photos, go to Whatsapp. You’re better off there,” he says. “But if you want to play around the internet and want a different world that’s simpler and easier to consume, that understands you intimately, makes your life better and faster, and gives you more utility, you come to Hike.”

For that reason, Mittal wants to keep his team compact, creative and efficient—he has around 240 employees across Delhi and Bengaluru.

At the same time, Hike is acquiring interesting talent such as Rajesh Rudraradhya, the former head of engineering at Motorola, and Vidur Vyas, former marketing director at PepsiCo.

It will be at least another year before he tries to monetise the application. For now, he is concentrating on building it and letting it evolve. “We still don’t know what Hike is. It’s like a baby [right now],” he says.

Interestingly, 5 percent of Hike’s user base is outside India: The larger chunk of this is from the Middle East countries and Germany, with small pockets in the UK and the US. Even this is not evidence enough to lure Mittal to foreign shores just yet. His priority remains India though he does have plans of eventually expanding to emerging markets such as Bangladesh and Africa.

All of this, notwithstanding, Mittal’s journey isn’t usually clubbed with that of other startup entrepreneurs. As the son of billionaire telecom tycoon Sunil Mittal, his story isn’t riddled with trials and tribulations, but it is impressive nevertheless.

After all, it is the tale of a bright young mind (he started writing software code by the age of 15) eager to make a mark of his own in the ever-growing digital space while consciously stepping out of his illustrious father’s shadow.

Yet the similarity in vision is also stark: Mittal would like to revolutionise the Indian digital space much like his father revolutionised the telecom sector with Bharti Airtel Ltd, one of India’s leading mobile operators.

“I have known Kavin for five years now. As a 23-year-old then, he was smart, passionate and had a clear vision and entrepreneurial spirit. He pursued the idea of creating a messaging service when there was no sign of the coming messaging era,” says Atsushi Taira, CEO, Bharti SoftBank and senior vice president, Global Business Strategy, SoftBank, over email. “Over the years, I have seen Kavin grow to become a thoughtful leader and one of the best entrepreneurs in India with the creativity and endurance of chasing his vision. Unlike traditional Indian leaders, he is hands-on and takes his people along not by orders, but by his thought and his clear vision. He is decisive, yet keeps his eye out for better options and commits to success.”

A known workaholic, it isn’t an uncommon sight to see Mittal at work till the wee hours of the morning. Even while studying for his Master’s degree in electrical and electronics engineering and management at Imperial College, he spent his summer breaks interning at McLaren Racing, Google and Goldman Sachs.

He isn’t the only Mittal kid making his own way in the world, however. While Kavin has never worked at the mothership, his twin brother, Shravin, has had a stint at working in the business’s international arm, joining Airtel International (Netherlands) BV as manager in 2010, from JP Morgan Cazenove in London where he worked as an analyst in the technology, media and telecommunications department. He currently works at a PE firm. Their sister Eiesha is married to a London-based businessman.

In this context, and with Sunil Mittal handing over the reins of the Bharti Group to professional CEOs, there is no inkling as to which scion will lead the group in future. But that’s a question that Kavin won’t even entertain for now. His eye is on the prize, and that, for now, is only Hike.


Change Quotient
Away from his father’s telecom business, Kavin Mittal has started Hike Messenger which started out as an app to provide a private chatting option to young people and has expanded to include news and cricket scores, among other value-additions. Though Hike comes with its own set of ever-expanding services, it has to contend with Whatsapp. But while other desi versions such as WeChat have fumbled, Hike is hoping to thrive through innovation, by going beyond the pure messaging function.