Union minister for road transport & highways and shipping Nitin Gadkari speaks on the turnaround his ministry has accomplished through innovative decision-making, his progressive agenda and the need for job creation 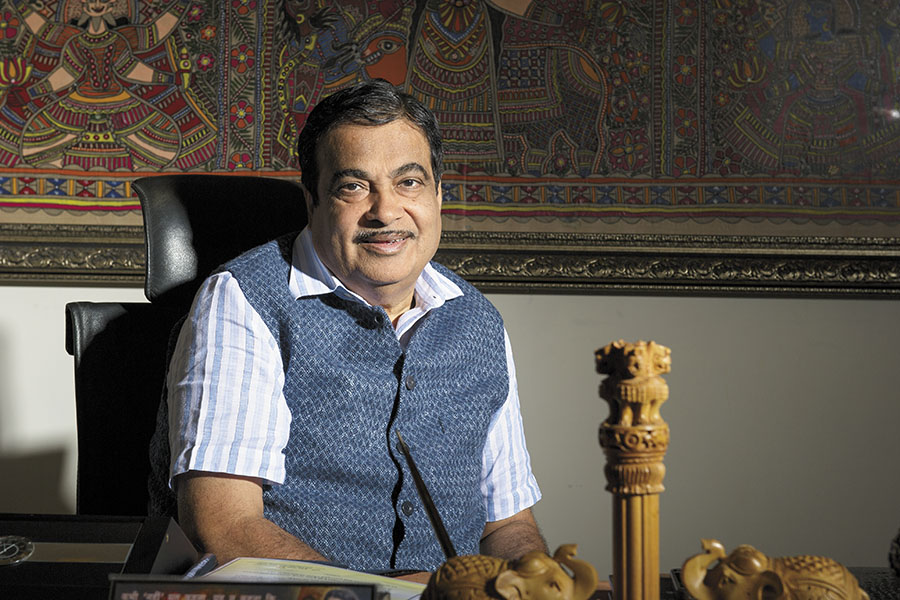 
Nitin Gadkari, 60, minister for road transport & highways and shipping, has been bolstering the Union government’s development agenda. He claims to have helped banks save non-performing assets (NPAs) worth ₹3 lakh crore, thanks to prompt decisions by his ministry. And while he’s busy chalking out plans to make travel hassle-free for commuters, he is averse to driverless cars in India, he tells Forbes India in an interview. Edited excerpts:

Q. What have been your ministry’s key achievements?
When I took charge in 2014, we had 403 projects, including stalled projects worth about ₹3.85 lakh crore. We decided to terminate projects worth ₹50,000 crore. As a result, we saved Indian bankers from NPAs of ₹3 lakh crore; that is a great achievement.

Also, when I assumed charge, road construction was [moving at a pace of] 2 km per day. Last March, it was 23 km per day and the average for the past 4-5 months has been 27-28 km a day. We are working towards making 40 km a day a reality. For the first time, we are constructing express highways and work is moving fast on three of them—Delhi-Meerut and the Delhi easterly and westerly bypasses. For the first time in the country, we are constructing express highway.

I believe the most important achievement for us has been in ports. In the first year, the profit in ports and all our organisations [Cochin Shipyard, Shipping Corporation of India and Dredging Corporation of India] was ₹3,000 crore; it shot up to ₹4,000 crore in the second year and ₹5,000 crore in the third. I am expecting profits of ₹6,000-7,000 crore this year. For the first time, we issued our [the government divested a 10 percent stake in Cochin Shipyard in August] shares on BSE. We got a response from 20 lakh people [during the IPO] for Cochin Shipyard shares. For only ₹1,650 crore, we received 126,000 crore applications; the issue was oversubscribed 76 times. So, the credibility of our ports, National Highways Authority of India’s (NHAI) AAA rating and the works carried out by my ministry are achievements for me.

I think the turnaround we have accomplished in the infrastructure sector during the three-year regime of Prime Minister Narendra Modi is a crucial achievement. Valuable contribution of my ministries of road transport, highways and shipping in this segment has helped in the overall economic growth, especially in job creation.

Q. You have said that the roads sector has helped save ₹3 lakh crore. How did you achieve this?
A: When I took charge of the ministry in 2014, there were over 200 highways projects worth about ₹3.8 lakh crore that were stuck due to various reasons like problems of land acquisition, environmental clearances, concession-related issues such as financing, slow work at the ground level and delays in commencing the works.

We took urgent steps to resolve these stalled projects through quick decision making, improved inter-ministerial coordination by creation of the Infrastructure Group, one-to-one interactions with concessionaires and bankers, online clearances and policy intervention. Twenty-two cabinet level decisions were taken. Policy initiatives like Exit Policy, rationalised compensation to concessionaires for languishing National Highway (NH) projects, one-time fund infusion were brought in. With all these interventions, we were able to resolve the problem of the stalled projects. Over 40 projects were terminated and the rest were brought back on track. If this had not been done, these projects would have ended up as NPAs.

Q. NHAI has been criticised for delays by the Parliamentary panel…
NHAI is committed to developing world-class road infrastructure that is safe, efficient and environment-friendly. The country had only about 96,000 km of NHs about three years ago; the figure is nearly 150,000 km now and will soon reach 2 lakh km. We are going to roll out the ambitious Bharatmala programme which will focus on new initiatives like the development of border and international connectivity roads, economic corridors, inter-corridor and feeder routes, national corridors, coastal and port connectivity roads and greenfield expressways. Phase I of the programme covers an aggregate 24,800 km and the total funding required is ₹5,35,000 crore, including money for the unfinished parts of the National Highways Development Project.

NHAI is also building expressways of international standards in high-density traffic corridors of the country like Delhi-Meerut, the eastern peripheral and western peripheral skirting Delhi, Vadodara-Mumbai corridor, Bengaluru-Chennai, Delhi-Jaipur, Delhi-Ludhiana-Amritsar-Katra and on Delhi-Agra routes. The government has approved a plan for constructing 1,000 km of expressways.

In addition to road construction, we are giving special attention to road safety and protection of the environment. Electronic toll collection is a major project that NHAI is handling. In order to remove traffic bottlenecks at toll plazas and ensure seamless movement of vehicles and hassle-free collection of toll, the government has implemented a nationwide electronic toll collection based on passive Radio Frequency Identification (RFID). It provides for electronic toll collection through FASTags. The project was first launched in 2015 and over 6 lakh FASTags have been issued so far. NHAI has recently launched apps for buying FASTags and also made provisions for their online sale and sale at points set up near toll plazas.

Q. MoRTH (ministry of road transport & highways) has set ambitious targets of constructing highways. How will you ensure that this goes on track?
A: Actually, we have set even higher targets. Our target for awarding of National Highways is 25,000 km while the construction target is 15,000 km; we will make all the efforts to achieve this. Time-bound execution of projects is a major commitment for me. If you see our performance in the last three years, you will find a consistent improvement. Last year, we awarded nearly 16,000 km of NH as against about 10,000 km the previous year and 7,972 km in 2014-15. We constructed about 8,200 km of NH last year as against about 6,000 km the previous year and 4,400 in 2014-15. So I am extremely hopeful of achieving the targets for this year.

In order to ensure this, the ministry has taken many steps in recent years. We have effected enhanced inter-ministerial coordination through an Infrastructure Group to resolve clearance issues related to environment and forests, railways and defence. Greater delegation of power has been effected within the ministry and its field offices for quick decision making. Increased focus is laid on quality of DPR during project preparation. Enhanced coordination is ensured with state governments for utility shifting, approvals and clearances and other administrative support. A three-tier dispute resolution mechanism has been put in place for quick resolution of disputes. Monitoring of projects has been made more effective through third party Authority/independent engineers and a comprehensive IT-enabled Project Monitoring System (PMIS).

Steps have also been taken to streamline the process of land acquisition. Land acquisition has been expedited by bringing the awards and their disbursal in consonance with the principles of the RFCT LARR Act, 2013. For the purpose of monitoring and expeditious settlement of land acquisition issues for various projects, guidelines have been circulated to constitute land acquisition cells in the Ministry, its ROs, NHAI, NHIDCL and their PlUs.

Innovative project implementation models are being developed with focus on risk re-balancing. For example, the ‘Hybrid Annuity Model’ has been developed and implemented. Monetisation of highway projects through the ‘Toll–Operate-Transfer (ToT) Model’ is being taken up on priority basis. Under the model, the right of collection of user fee (toll) for selected highway stretches constructed through public funding shall be assigned for a specific time period, to developers/investors against upfront payment of a lump-sum amount to the government. Around 75 operational NH projects completed under public funding have been preliminarily identified for potential monetisation using the ToT model.

Our daily construction figures have gone up from a pathetic 2km/day to 23 km/day, and we are working towards making 40 km/day a reality.

Q. You have spoken in favour of concrete roads across India. Have you moved ahead with this plan?
We are promoting concrete roads in national highway projects. These are durable with low maintenance costs. It gives a boost to our cement industry. My ministry has launched a portal for purchase of cement by those engaged in highway construction at competitive rates. But let me assure you that I will not allow any cartelisation by the cement industry to increase cement rates.

Q. With a view to saving jobs, you have said that there won’t be driverless cabs in India. But doesn’t that go against the government’s progressive and tech-driven outlook?
No, I am progressive and forward-looking. Our policies are friendly for investment and development. At the same time, we have to consider the problem of unemployment. Manpower is our strength. We need tech, innovation, entrepreneurship and electronics, but at the same time, we have to protect the employment of the country’s youth. We have a shortage of 22 lakh drivers in rural and tribal areas. Poor people live there and we have to take care of their employment. I’m not against development and technology, but we have to consider our socioeconomic scenario and fabric while devising policies.

Q. Is it written in stone that driverless cabs will not be allowed in India?
Presently, I feel India does not need them. But in the future, we will think about it as an experiment. The NDA government under Prime Minister Narendra Modi is for job creation, and not job losses. I can understand driverless cars in developed countries where there is shortage of manpower. India has vast human resources. We have skilled manpower that understands driving and hence the cost is less. The NDA government is for job creation. My ministry is opening driver-training centres across the country to provide jobs in this sector. India is striving to keep pace with global technology in the automobile sector. We are encouraging electric cars and other innovations in this field. But a developing country like India has to ensure jobs for its youth. So we would not favour driverless cars. But I have not ruled that out in the future.