We have taken learnings from India to other emerging markets: Uber India head

Uber Technologies Inc, which is present in over 400 cities across 70 countries, customises its products to be local and relevant, says country head Amit Jain 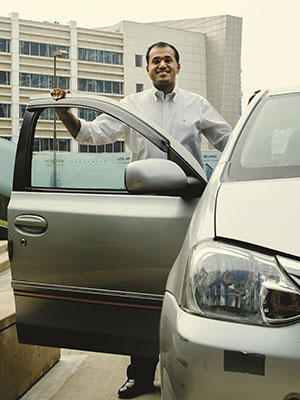 Q. How has the past year been for Uber India?
It has been a phenomenal journey so far. It’s been a year for me and two-and-a-half years for Uber in India; we are in 27 cities in the country. We started off in one city, Bengaluru, and are also present in Colombo, Sri Lanka, today. Between 2014 and 2015, our business has grown 26 times, and we continue to grow week over week. We have close to 3.5 lakh driver partners. We have made a tremendous difference in their livelihood, income levels, flexibility at which they can earn and [bring about a] change in their lifestyle.

An important area will be the growing [positive] impact on cities from a pollution and congestion perspective due to the various features that we have rolled out, including car pooling. We’ve launched Uber Pool in Delhi and Bengaluru. More than 25 percent of our rides in both cities are on Uber Pool now. If you look at a more mature market like San Francisco where we launched Uber Pool much earlier, more than 50 to 60 percent of our customers use the service. There is a lot of potential there. We have launched Uber Commute in Delhi as well as Uber Bikes. We do consider other markets and will continue to expand in other cities. However, it’s not been a focus area for us because we think there is enough opportunity to grow in the markets that we are [already in].

Q. How have you adapted to the Indian environment?
We customise our products to be as local and as relevant as possible. We have one app that works across 70-plus countries and in close to 450 cities. However, we tweak the app and our product offerings based on the region. We first launched cash [payments] in India. We have Uber Go, which is a cheaper version of the service with a hatchback that we didn’t have elsewhere. We launched bikes here recently; it is the second country where we have two-wheelers and we also have autos in a few cities. In some cases, we have taken learnings from India to other emerging markets. We have a customer support centre here [in Delhi] and a Centre of Excellence in Hyderabad from where we provide phone support to our drivers. We have also opened an engineering centre in Bengaluru a few months ago, and are aggressively hiring for that. At present, the Centre of Excellence and the engineering team combined have 500 people. We will more than double our size by next year.

Q. What steps have you taken to ensure passenger safety?
Security continues to be one of our major and most important focus areas. We’ll innovate in areas of security and safety. We think about safety three-fold: Before the ride, during the ride and after the ride. Before the ride, it’s about the extensive background checks that we do. You must have all the documents in place, driver’s licence, registration, police verification and so on. During the ride, there is a panic button, which sends your status to friends and family. Security after the ride is feedback for the driver. Every ride is rated and every rider can give feedback. We take the ratings very seriously and if the driver falls below a certain rating, we waitlist them.

Q. Where are your talks at with state governments and transport authorities regarding regulations in India?
We have been having proactive and productive discussions with the Delhi government for several weeks. I had the chance to meet Chief Minister Arvind Kejriwal and we had a healthy discussion of around 90 minutes. We are excited that the government is coming up with guidelines for this space, which are due [to be implemented] shortly. A lot of the discussions, I’m hopeful, will go towards the formulation of those guidelines, which will help the growth of this space.

As technology brings about change, not just in our space, as different areas emerge [and] innovations happen, in many cases, regulation will be lagging behind. In our case, the regulations were written decades ago. The internet didn’t exist at the time, let alone a service like Uber. Regulations will have to keep pace with technology. This is not specific to India; it’s across the world.