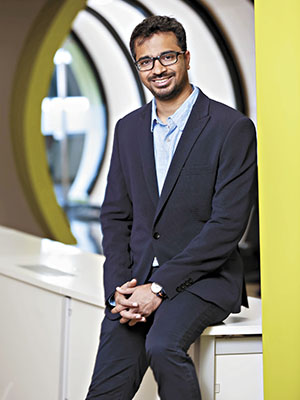 Ankit Bhati may be an entrepreneur, but tech is what makes his eyes light up. That is a good thing for Ola, given the number of projects he’s able to bring his focus to at Ola Innovations Lab, where research projects, both for near-term commercial use and longer-term strategic purposes, are being nurtured.

While Bhati refuses to reveal serious details on the strategic research, in fairly generic terms, priorities include data analytics applied to a range of interests. “Peak pricing is obviously a focus area. How do you make it more predictable, make it more palatable, more granular?” he says. Pricing ride-sharing is another point of interest—how do you do it right? Too low and it might attract people who aren’t necessarily going in the same direction, too high and no one might opt for it. “This is really the tricky part of the algorithm.”

Demand prediction— how much supply would Ola need in which part of the city—and the related area of allocation strategy—how far away from a customer should the platform look at in locating a cab—are two other areas of interest.

Quality and performance management are considered as well: If different passengers provide different ratings for the same driver, how does one get to the bottom of it and train and coax the driver to provide consistently high quality service?

Low-network optimisation is another priority. “What we’re aiming for is an always connected car, reducing the payload.” That means, when a device on the car sends an update to Ola’s servers, it has accumulated data. How can that be changed so that it takes up less data and/or is amenable to transmission on limited bandwidth?

Bhati is happy to borrow tech where he doesn’t need to invent it. “Google has released an amazing open source tool called Protocol Buffer, Protobuf for short, and Facebook has created a detection kit for network health—which can be used to see if network performance is high, low, bad, spotty or if there’s simply no network available at all.” Another focus area is device performance given that they use GPS, accelerometers, gyroscopes and so on— capturing the extent of vibrations of the device could, for instance, give Ola an indication of how well the driver is driving or the condition of the road. Also, it is important to make sure the device doesn’t heat up.

The auto connect Wi-Fi service has a whole host of uses for Bhati beyond consumer satisfaction. “What it really helps us with is peer-to-peer connections—meaning there is this whole network of cars that can talk to each other, allowing Ola’s many network optimisation efforts to piggyback on them.”
Another interesting effort relates to rendering local language fonts on devices with “sub-par” RAM. Given that India is flooded with cheap Android phones, how does one ensure Ola’s app—which supports nine local languages, currently—works well on a cheap phone and doesn’t come in the way of its performance?

Tweets by @forbesindia
Tata Power-Welspun deal may become benchmark for clean energy deals
We have taken learnings from India to other emerging markets: Uber India head