Over the past several months, many owners of the new Swift have been complaining that their car doesn't stop in bumper to bumper traffic. Maruti doesn't agree. Will this be the first test of SIAM's voluntary recall code? 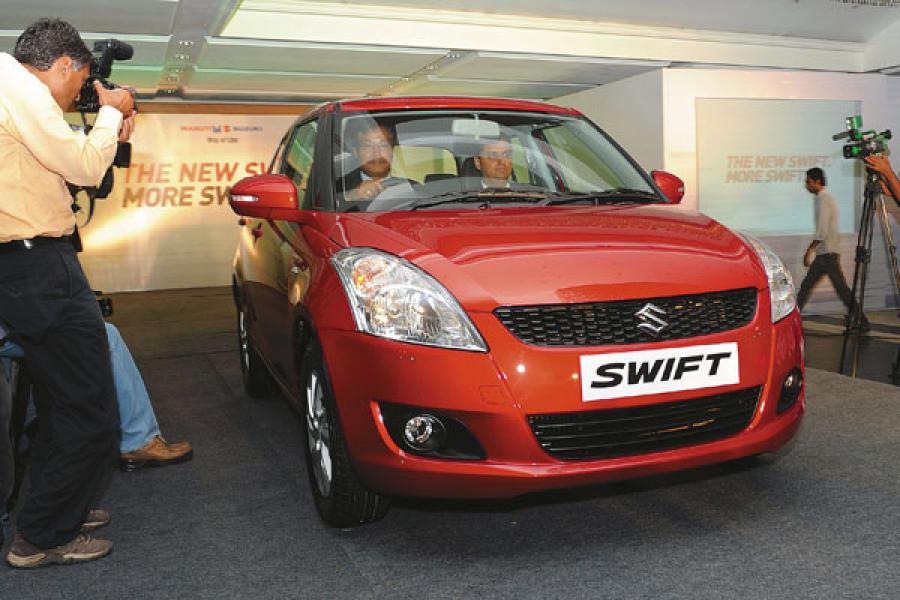 Image: Getty Images
THOUGH CUSTOMERS are complaining the new Maruti Swift won’t stop in heavy traffic, the company denies any problem with the car’s brakes

Mangalam Singhania, a 31-year-old IT professional based out of Bangalore and the once-proud owner of the new Maruti Swift, was really angry. He had waited 22 days (May 31-June 22) hoping that somebody from Maruti Suzuki would reply to his email and explain why his car wouldn’t stop in bumper to bumper traffic.

But nobody did. And Singhania had already tried everything: Threats of a consumer court case, five visits to authorised Maruti service stations in just six months, and long discussions with the Maruti Regional Service manager in Bangalore. But nothing worked. Maruti refused to acknowledge that there was any problem with the car’s brakes. Frustrated, Singhania sent the company’s customer service department a strongly worded email. That didn’t get a reply either.

Singhania is not the only one with this peculiar problem. In the past six months, several Swift buyers have complained of a braking issue in their new cars. They have complained on car forums, in emails to Maruti, on the Swift’s Facebook fan page. In Kerala, Sibiraj PR even filed a consumer court case against Maruti, but the company has given no explanation. Puzzled customers who complain at the dealership are told to register the complaint directly with Maruti. The total number of consumer complaints, which you can pick up from car enthusiast forums, runs into the hundreds.

So, what’s the problem with the Swift’s brakes? Toms Matthew, who bought the top end ZXi variant in February 2012 and has had a frustrating time since, explains it pretty well. “You need to be in bumper to bumper traffic situation…of which we have a lot in Bangalore, drive in first gear, half clutch, RPM under 1,000 and after two or three presses on the pedal, the brake pedal becomes absolutely hard and there is no braking,” he says. While this typically happens at speeds under 10km/hr, it is not a nice situation to be in. During two separate incidents while driving in heavy traffic, Matthew says his Maruti scratched a Honda City and a Toyota Innova after his brakes failed. A third time, while Matthew was parking in his garage, the Maruti scratched a parked motorcycle.

Though the risk of harm is low at such slow speeds, a car needs to stop when the driver hits the brakes. When it won’t, there’s a problem. Maruti, though, seems to disagree. “There is no impact on braking performance in the cars mentioned. If the customer has experienced hardness in the brake at very low speeds of 5km/hr or less, that may be on account of driving in half clutch and pressing the brake to control speed, which results in engine RPM [revolutions per minute] falling below ‘Idle RPM’ [the speed at which the engine generates enough power to operate smoothly],” said the company’s spokesperson. “The brake is fully functional during such time, irrespective of hardness of pedal. “The correct technique is to press the brake and not crawl at half clutch. Please note that the NVH [noise, vibration and harshness] refinement level of new Swift is so good that the engine does not judder even under such abnormally low RPM conditions.”

Customers say that not only do stop and go traffic conditions require driving in half clutch, the problem surfaced only in the new models. And while Maruti maintains the Swift’s brakes work even when customers drive in half clutch and the pedal becomes hard, customers and experts believe Maruti isn’t coming clean on the problem. “It is not a first brake and then clutch issue. If this has to be done in stop go traffic, more than half the drivers will be stalling their engines... But yes, there could be a problem with the brake pistons which do not release on the third or fourth application [only if this happens rapidly]. This usually manifests itself as brakes getting hard. What you need to understand is, do the brakes still apply or is there no braking? No braking, then we have a serious issue,” says Bertrand D’Souza, editor of Overdrive magazine.

Even Maruti agrees there is some hardness in the brake pedal, and customers swear that when the pedal becomes hard, the brakes don’t work at all. So, is this a serious problem being pushed under the carpet?

Just a few weeks ago, the Society of Indian Automobile Manufacturers (SIAM) issued a voluntary code of conduct by which automobile manufacturers agree to call back vehicles found to have defects defined in the code. But drivers shouldn’t expect Maruti to make the Swift the first car recalled under the new code. Since Maruti does not think there is a problem, customers have been left high and dry.

There is no precedent for recalls in a country where a car maker can change the starter motors in about 1,40,000 cars and still refuse to call it a recall, as Tata did with the Nano. At the SIAM press conference announcing the voluntary code of conduct, SIAM President S Sandilya said whatever Tata Motors wants to call the Tata Nano case, it was a recall. Tata Motors was not happy about this. Their spokesperson responded to Sandilya’s comments in an email to Forbes India, saying, “The installation of the new starter motor, which is a vendor supplied part, began in October 2011 and has been completed. This new starter motor was already installed in the Nano 2012, which was introduced in November 2011…we decided that we will give owners of old Nanos on the road also the option, free of cost. That is how it was done. It was not a recall.”

Recall or no recall, the SIAM initiative is unlikely to live up to expectations because automakers have a vested interest in avoiding costly recalls. In most countries, automobile recalls happen because there is a separate, independent body whose sole job is to set safety standards and ensure that they are followed. These agencies review each and every call, letter and online report they receive of an alleged safety problem. Depending on the number of consumer complaints, they may start an investigation. If safety-related defects are found, it’s up to the independent agency to determine whether or not a safety defect exists. If so, the manufacturer has no choice but to conduct a recall.

The problem with the Indian automotive industry is that there is no such body overseeing auto safety. Instead, it’s up to the manufacturer to issue costly, but perhaps crucial, recalls. Sadly, that means India’s car buyers are usually out of luck.

Show More
Get the latest stories, videos, and podcasts from Forbes India directly in your inbox every Saturday
Thank you for your comment, we value your opinion and the time you took to write to us!
Comments 60