When Kunal met Ratan: How the Tata-Snapdeal bond was forged 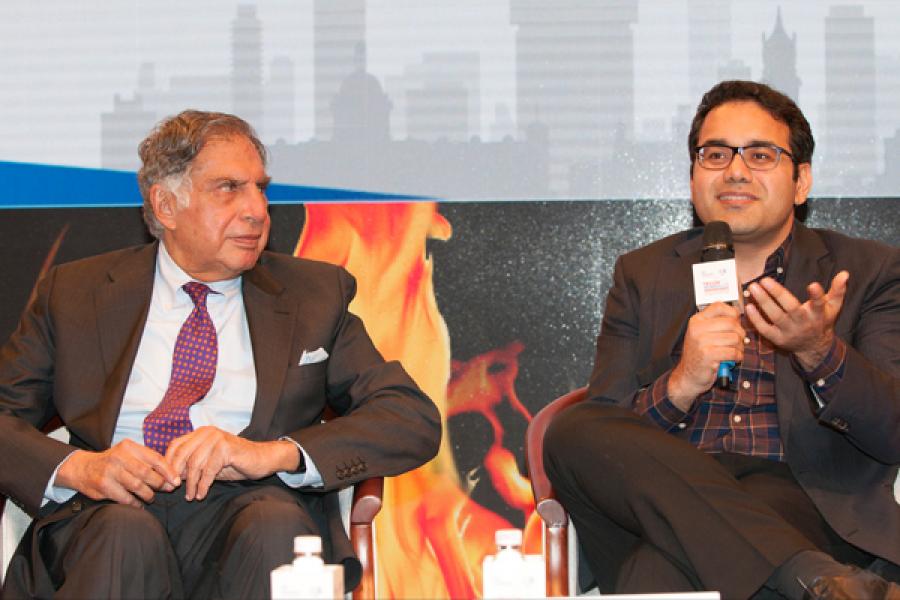 Kunal Bahl is not someone who gushes every day. The co-founder of one of India’s fastest growing ecommerce firms has seen lowest of the lows as well as dizzying heights. But the balmy Wednesday evening in Mumbai was different. Bahl, like many others, could hardly contain his reverence. The young co-founder was sharing the dais with one of India’s most revered industrialists, Ratan Tata, who is also a well-known startup enthusiast. Not just Bahl, almost everyone in the jam-packed auditorium at the TieCon event lapped up every word that Tata said.

“I definitely have to say I never thought growing up this day would ever come. I might be six inches away from someone not [just] every Indian but every human being ever born would want to take inspiration from,” said Bahl, whose Snapdeal has received an undisclosed funding from Tata.

So how did it all start for Bahl – getting funding from Tata (also approval of his business model, in a way)? All it apparently took was just one phone call.

About a year-and-a-half ago, when Bahl was going back home from work, he got a call from a person who said someone really wanted to talk to him and could be a potential investor in his company. When Bahl asked who it was, the person refused to divulge the potential investor’s identity.

Bahl agreed to speak to the potential investor and, after a few conversations, got a hint that it could be Ratan Tata. He caught the next flight to Mumbai. Bahl said he was extremely nervous before this meeting as he had no clue what to expect. In his bid to prepare for the meeting, Bahl even saw several YouTube videos of Tata. But nothing prepared him for the real meeting.

“When I went to his office, contrary to what we thought of big traditional businessmen in India…. big chairs, tables….Mr Tata just pulled a chair and sat next to me, and said, your growth story is amazing, how do you do your logistics?” recalled Bahl. And the rest, as they say, is history.

What got Tata to think of investing in young start-ups?

“After I retired it seemed to me that there was a whole new world out there which was a digital world driven by a marketplace, which had a huge potential driven by handheld devices which would one day become the virtual retail store of India. I didn’t know the companies in the business other than [being] struck by the name. It was and still is a learning experience for me to learn of this world which is like a virtual world of a business that I have been in for 20 years. The virtual part is replaced or overshadowed by my impression of the founders. It was a start of a journey that I am absolutely thrilled to be a part of,” Tata said.

Tata said he is intrigued and enthusiastic about meeting younger people because they are the future of the country. “I have learnt a lot, probably more than you believe. I am intrigued by a startup which has an interesting concept that excites me; if it doesn’t excite me then I really don’t need to make an investment,” he said.

According to him, founders matter a lot. “A founder that is in for the short run or has no passion for the sector he is in doesn’t give me a great deal of comfort and, in my small way, [I am happy] if I can be of help in supporting or helping a founder who either has an interesting business or who doesn’t get funding from others because his business is not a sexy business that the investing public feel.”

Tata said he is “more intuitive than a numbers person” and realizes that not all investments are going to be positive. “Some may fail and some may have problems for other reasons. That is life. Intuitively you can make your judgment and you could be wrong. One must not confuse ambition and aggression.”

Bahl said he could answer all business oriented questions from Tata, but the toughest question he had for the chairman emeritus of Tata Sons was if could take a selfie with him. “And he said yes, and that was the most memorable photograph I have. I showed it to my mom and she said you are on the right track,” recounted Bahl. Tata invested in Snapdeal in August last year. “95% of the capital we’ve raised as a company has been raised after that. So it is much, much more than a good luck charm.”

The selfies certainly didn’t stop at Bahl. Before leaving amid a thunderous ovation, Tata obliged the audience with a group selfie.