Having earned a name in the handbags space, the company is now looking to become a lifestyle brand across categories like footwear and eventually, apparel 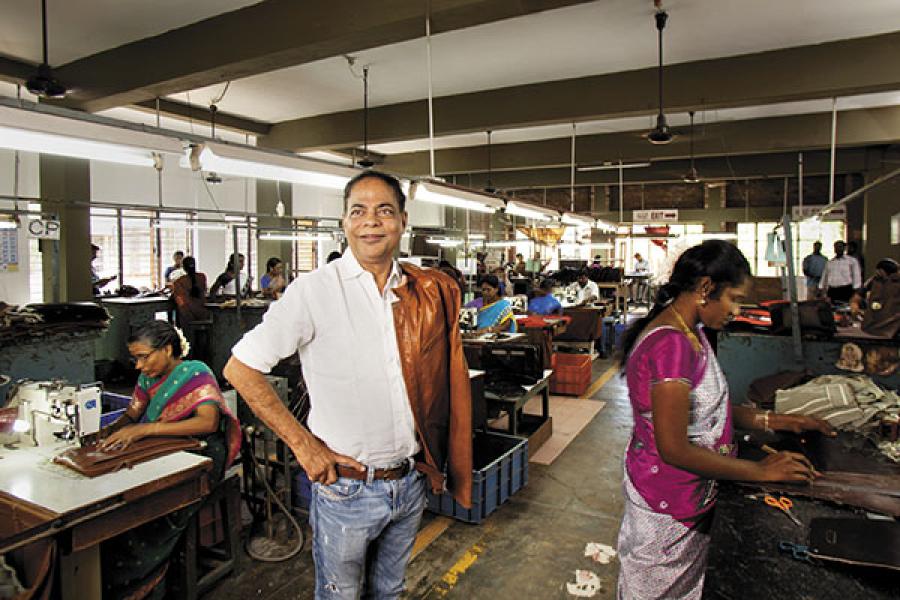 Image: Namas Bhojani for Forbes India
Dilip Kapur, founder & president of Hidesign, at the company’s factory in Puducherry. He started the business in 1978 to pursue his ‘hobby’ of designing bags

One look at Dilip Kapur and you will know he wears his brand proudly on his sleeve: Or, in his case, carries it on his arm. “It’s like carrying a story, an emotional bond,” says the 67-year-old, pointing to his Hidesign handbag which, he tells us, is at least 20 years old.

The promoter’s sentiment also speaks of the Rs 160-crore company’s ultimate goal—to emerge as a lifestyle brand that touches all aspects of a customer’s life. And its efforts over nearly four decades have been trained towards that. The last two years have been particularly busy as it delivered several ‘firsts’. For instance, the Puducherry-based leather firm unveiled its footwear collection for men and women; it launched sunglasses and also started offering discounts for the first time ever.

It has also set in place plans for the next five years, says Kapur, the effervescent founder of Hidesign, adding that the brand has to go beyond bags, the product group with which it is most closely associated. “We realise that the biggest hurdle in the development of a brand is to get stuck on one product. Gucci, Louis Vuitton… they all went beyond bags. I don’t want Hidesign to be just a bag brand, it has to extend into a lifestyle brand,” he says. Over the next two years, the footwear line is expected to contribute 12-15 percent of the company’s turnover. Hidesign clocked revenues of over Rs 160 crore in FY2015. It has also posted year-on-year revenue growth of 20-30 percent over the last four years. At over 60 percent, bags are the biggest contributor to its revenues.

This growth spurt, perhaps, is linked to the involvement of Louis Vuitton (LV) with the company. In 2007, the French luxury giant chose Hidesign to tap into the leather products space in India and acquired a five percent stake in the firm. While LV does not generally speak to the media about its investments, in 2007 it told Financial Times that “it liked the homegrown nature of the brand”. LV has been advising Hidesign on branding, marketing and training.

Hidesign’s products are currently offered across over 60 exclusive retail stores; it has a distribution network in more than 20 countries. Its leather collection includes handbags, clutches, briefcases, laptop cases, wallets and belts. Apart from the flagship brand, Hidesign launched Holii, a brand aimed at bringing distinct Indian design aesthetics to bags and accessories along with high production standards, in 2009, in a joint venture with the Kishore Biyani-led Future Group. The Hidesign group also runs two hotels in Puducherry: The Promenade and Le Dupleix. In 2012, Hidesign forayed into the luxury segment and launched its range of ‘Ciaschini’ bags named after Italian designer Alberto Ciaschini who joined Hidesign as lead designer in 2004.

The person behind it
For Kapur, it all started in 1978 as a hobby from a thatched shed in Puducherry. He had just returned to India from the US after earning a PhD in international affairs from the University of Denver. He seed-funded his ‘hobby’—designing bags—with Rs 25,000, using the money to buy a sewing machine and leather.

Since then, an adherence to quality has defined Kapur’s approach to the retail business. And his persistence seems to have paid off. For instance, Hidesign is the only firm in the country in which Louis Vuitton has invested directly and not through its PE arm, L Capital. But that’s not enough for Kapur, for he has another milestone to cross. “An IPO will happen for sure, but not right now. We will consider it when we have a top line of Rs 400 crore,” he says. In any case, Hidesign is in for the long haul, he adds. 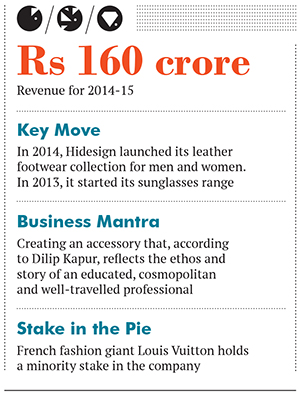 Why it is a gem
Hidesign’s aesthetic focus has been on a classic contemporary look, catering to the educated and sophisticated urban professional. The company has three design teams based in Milan, London and Puducherry that work together to create two new collections a year. Besides its seasonal collections, Hidesign has a classic range of products that have seen minimal change for thirty years and continue to garner customer appreciation.

Also, the company has been able to hold its own in what is a very competitive handbags market, comprising organised and unorganised players. Over the last few years, brands like Lavie, Da Milano, Baggit, Caprese, Lino Perros and Esbeda have come up and are dominating the space. Not only are these brands cheaper than Hidesign (which plays in the Rs 3,000-8,000 price range), they also offer huge discounts, sometimes as much as 50-60 percent, during the sales season. Kapur is not overly concerned about the competition though, saying the Indian handbag story is a game of Chinese imports and Hidesign is not that.

Though a price war is not a part of Hidesign’s plans, staying affordable is. For the first time, Hidesign has started offering discounts. Kapur says it’s a market “compulsion”. “We would be the only shop in the malls not to offer sales and our staff would complain,” he says, chuckling. “But our discounts are not like others. They are small, only for handbags and are never more than 25 percent. The sales are never on classics.”

Instead of going through distribution channels, the company is now working on a direct presence in overseas markets and is in the process of setting up its US business in California; Kapur’s son Vikas is overseeing that. Experts say the biggest USP of Hidesign is its product. “It’s not a mass product, it’s not a copy of others and it’s not a me-too product,” says Devangshu Dutta, chief executive, Third Eyesight, a retail consultancy.

And finally, Kapur’s openness to adapt and change helps. “We believe beauty comes naturally… it is in cotton and linen, not synthetic or nylon. Are we getting into clothing? No brand can survive without getting into that,” says Kapur. “Apparel is a bit too early for us but we will get there in five years. Apparel is the final step. Typically brands get into apparel late.”

Why it was hidden
Despite operating in the retail space, Hidesign isn’t quite an over-exposed name yet. Its premium positioning and pricing has restricted it from becoming a mass brand in the leather products category. Shying away from regular print and television advertisements, Hidesign’s promotional push is comparatively niche and targeted predominantly at an aspirational urban clientele.

The leather goods manufacturer has also stayed away from celebrity endorsements, a common trend in the retail and lifestyle business.

Further, the Hidesign brand is synonymous with the handbag business and very few are aware of its footwear line, its ecommerce portal or its presence in the hospitality space.

Risks & challenges
One of the variables that this business faces is that its products are made from cow leather. With tanneries shutting down in cities like Kolkata and Kanpur, procuring leather has been a challenge. There are, of course, also the global protests regarding the ethics of using leather.

Then, there is the expert view that Hidesign needs to spend more time in India before it gets into brand extension. “Globally, it is the second or the third generation that goes for brand extension,” says Harish Bijoor, chief executive at Harish Bijoor Consults Inc, a brand consulting firm, adding that creating too many categories can affect the company’s focus.

Dutta of Third Eyesight says brand extension can be undertaken by a company only if it is confident of maintaining the consistency of its product quality. He adds that it is imperative for companies to understand that brand extension works well in adjacent categories. “It should not devalue the brand,” he says. Especially not one that the promoter himself likes to wear like a badge of honour.