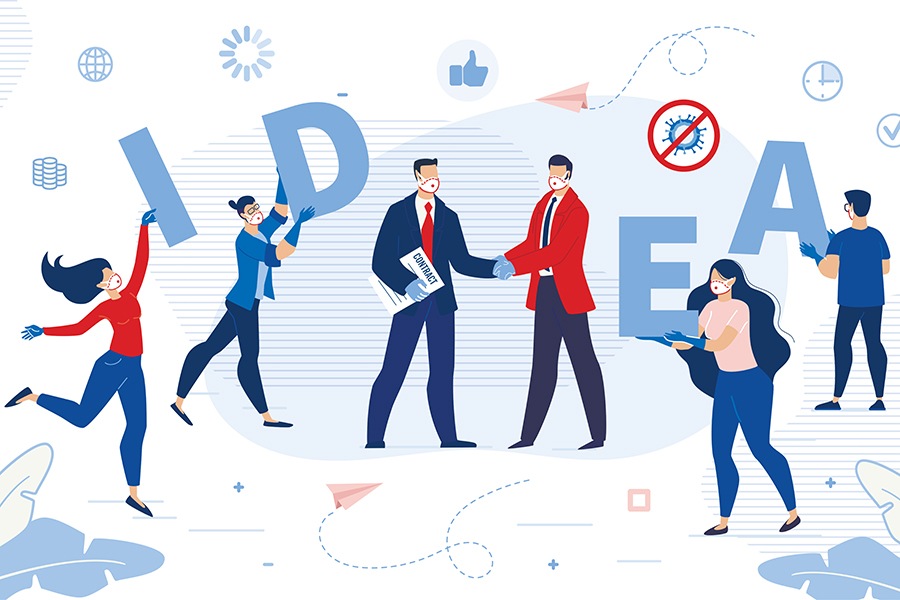 
Sam’s Chowder House, named one of the 100 most-scenic restaurants in America, sits on a bluff overlooking Half Moon Bay. It is a multistory wood building with terraced decks and seating for hundreds. On March 15, the company sent an email to patrons announcing that shelter-in-place policies would be closing the dining room indefinitely. Another email came two weeks later announcing 150 employees had been laid off.

This was personally distressing news for Stefanos Zenios, the Investment Group of Santa Barbara Professor of Entrepreneurship at Stanford GSB and codirector of the Center for Entrepreneurial Studies. Sam’s is one of his favorite Bay Area restaurants, and he was sad to see the establishment suffer.

But from a management perspective, Zenios was more engaged than distressed. He decided that the restaurant’s response in the weeks to follow — offering curbside pick-up options, clearly communicating hygiene precautions, and creating a new online ordering system — exemplified the kind of agile thinking that he discusses with his students in Stanford’s Startup Garage. As best it can, Sam’s Chowder House is working around the economic hole created by the coronavirus pandemic.

“They’re a great case of how companies today need to, and can, be adaptable,” Zenios says. And the world of startups with which he’s so familiar provides a valuable blueprint for reorienting and stabilizing companies when the economy has plunged into such novel territory.

Quickly Define the Problem
Solving a problem requires first understanding it. Managers from different parts of a company, Zenios says, must make time to meet and share, from their distinct vantages, how the pandemic is placing pressure on the business. One manager may be struggling with shifts in consumer behavior, another with problems of supply, a third with fractured partnerships.

Part of this process, he emphasized, is drilling into details by asking “why?” If shelter-in-place policies have been lifted, but customers aren’t returning, ask why: Is it because they aren’t aware the store is open? Is it because they fear getting sick? Is it because they have less discretionary income? Probing for specifics clarifies potential solutions.

Once problems have been defined, Zenios advises, they should be sorted into a two-by-two grid. The horizontal axis describes how readily your company can address the problem; the vertical axis describes how much benefit will derive from addressing the problem. Companies should be looking for problems that sit in the upper-right corner — those which are both actionable and likely to help the business recover.

Zenios is emphatic that this exercise should take no more than one hour. “More than that and people start overthinking and overanalyzing, even though they don’t — and can’t — know the exact problems,” he says. The point is to be flexible, not exactly right. “In the current environment, where things are rapidly changing, you don’t have the luxury of nailing the problem precisely.”

A Bias for Action
Then take these problems and search for solutions. This search, Zenios says, should be tailored to suit the particular dynamics of each team. For instance, extemporaneous brainstorming often works well among extroverts, while introverts might instead be given a day to think in private and write out their thoughts.

When potential solutions have been collected — and they should be collected indiscriminately, with nothing ruled out prematurely — then companies can go back to the two-by-two grid to determine which solutions are both possible to execute and promising in their impact. With a cluster of ideas in the upper-right corner, Zenios said, move quickly to experimentation.

“You want a bias for action,” he says. “Bring the ideas in front of your customers and see what their reaction is. Do they like what you’ve proposed? Are they engaging with the ideas, perhaps in unexpected ways? Monitor what these interactions look like and determine whether you’re actually solving the problems you defined.” Do this, he insists, through observation, not surveys.

Safety Inspires Innovation
Zenios also suggested that the overarching mandate to keep employees and customers safe from a highly contagious respiratory infection, generally perceived as an impediment to business, should instead be used to catalyze innovation. It may seem counterintuitive, he says, but a strict safety mandate creates a filter through which every idea must pass, and it can inspire novel forms of employee and customer interaction.

The process of sprinting from problem to prototype, endemic in the world of startups, is often stifled in mature businesses because they fear the prospect of failure. But this mindset must be jettisoned: If virtually no passengers are flying on your planes or riding in your rideshares, if virtually no customers are walking into your stores or dining in your restaurant, then there is only upside to testing novel ideas.

Finally, success at the outset should be measured by one metric alone: customer engagement. Are customers enthusiastic about the new product or service? Are they using it?

“Once you get an enthusiastic response, you can take a step back and begin to quantify what you’re seeing,” Zenios says. Collect and analyze data spinning out from the new process and see what it says about the bottom line. “All of that of course becomes valuable later on, but at the beginning you just want to measure engagement.”

As codirector of the Center for Entrepreneurial Studies, Zenios recently helped to launch Stanford Rebuild, a global innovation sprint focused on accelerating solutions for the wide range of challenges and opportunities society will face as it emerges from the worst of the COVID-19 pandemic. Students, innovators, and business leaders from around the globe are invited to participate in an eight-week focused investigation of ideas that will help to create a better and more equitable post-pandemic future.

Tweets by @forbes_india
Photo of the Day: Customers queue outside the Apple store for new products, socially distanced
The importance of clean water for sustainable world