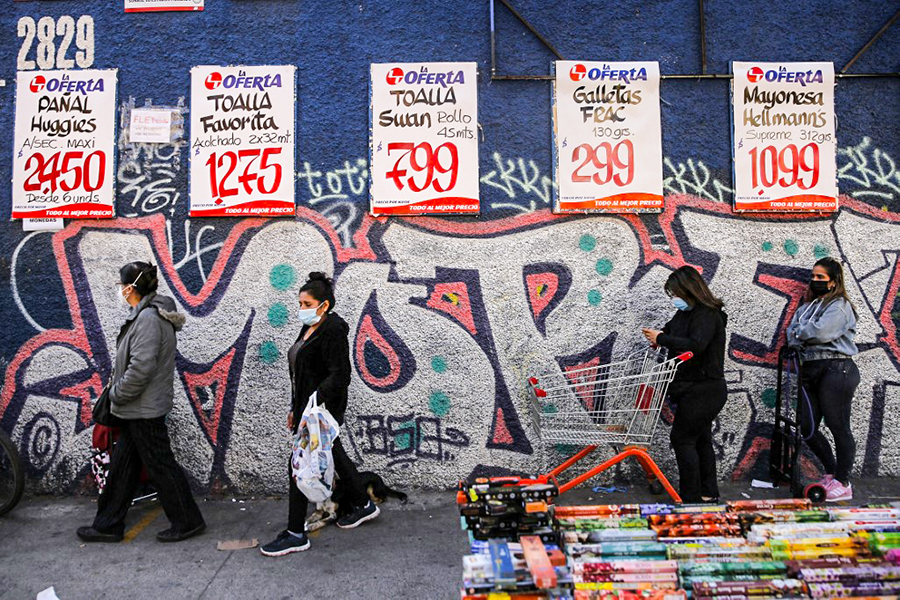 People queue outside a store at a commercial area of the Quinta normal commune in Santiago, on June 10, 2021. Chilean authorities imposed Thursday a new total lockdown in the Santiago metropolitan region due to an increase in coronavirus cases although a 57% of the target population is already vaccinated. Image: Javier Torres / AFP

Latin American countries were quick to mandate lockdowns and mobility restrictions when Covid-19 hit in March 2020. While it was clear that these public health measures would put the brakes on the region’s growing economy, it was not evident how people would react to them, particularly when faced with the choice between sacrificing income and avoiding infection.

This dynamic was especially pronounced in Santiago, Chile, one of the region’s most prosperous cities, but also one with deep socioeconomic inequality that had fueled violent antigovernment protests in late 2019.

Against this backdrop, Gabriel Weintraub, a professor of operations, information and technology at Stanford Graduate School of Business, and a team of researchers in Chile ran a study in the early months of the pandemic to observe how lockdowns and shelter-in-place orders would affect the spread of the virus in Santiago. Using cellphone data to track residents’ movements, they found that socioeconomic disparities had a major impact on how people reacted to public health orders, which in turn could predict Covid outbreaks.

“How people responded differently to lockdowns was not that surprising,” Weintraub says. What was surprising was the magnitude of the gap between low-income and wealthy communities: “We saw a striking difference in how a wealthy municipality with no mandatory restrictions reduced its mobility a lot more than a low-income municipality with lockdowns in place.” Wealthier areas in Santiago reduced their mobility between 50% to 90% while low-income areas only showed reductions between 20% to 50%.

Those differences in mobility proved to be important signs of increasing case counts. The study found that a 10% increase in mobility in a municipality correlated with a 5% increase in the rate of infections.

To effectively contain the virus, Weintraub and his colleagues concluded, lockdowns and shelter-at-home orders had to be accompanied by efforts to make compliance easier for people in low-income areas.

The researchers tracked Santiaguinos’ mobility with granular cellphone location through a collaboration with Entel, Chile’s largest telecom company, and the Complex Systems Engineering Institute (ISCI). The anonymized data was collected from zones of around 2,000 to 3,000 people over the course of several months.

“We located the cellphones at night, which we associated to people’s homes, and then we saw where they went in the morning and the afternoon on the weekdays, to capture patterns related to work,” Weintraub says. The researchers analyzed this geolocated phone data along with localized data on infection risks, studying the frequency of travel to risky areas. “We wondered, what is the effect of mobility on infections? We did the econometric analysis on this too, and we found indeed that a reduction in mobility reduces infections significantly.”

Weintraub and his coauthors started collecting data in early March 2020, when the Chilean government closed schools and recommended remote work in Santiago. At the end of that month, the city implemented its first mandatory localized lockdown, mostly affecting the eastern part of the city, where most of the population is in the highest income group. Even during a period of voluntary sheltering in place, the rate of new infections in these areas remained relatively low.

In April 2020, the first lockdown was lifted and one was placed on lower-income areas. In these areas, where many residents rely on in-person day labor, the infection rate continued to rise at a higher rate than that in the wealthier areas that were no longer under lockdown. Eventually, this led to an explosion of cases in mid-May, and the government was forced to mandate a citywide lockdown, which slowed the rate of infection across the city.

As they were collecting their data, Weintraub and researchers from ISCI and the University of Chile made it available to the public through an online dashboard. They also met with the Ministry of Science and Office of the President to keep them informed of their findings and inform government decisions regarding lockdowns and related measures.

After several months, it was clear that lockdowns could work, yet also that low-income communities needed more support to comply with them. The Chilean government had already launched a fiscal package to support small businesses and other payroll workers, but little had been done to assist informal workers and low-income populations. In May 2020, President Sebastián Piñera announced a more comprehensive support plan focused on providing healthcare, essential goods, and direct financial help to families through cash transfer programs.

“It’s hard to tell how much our work influenced that decision,” Weintraub says. “But that’s something we were strongly advocating for at that time.” He notes that the study’s econometric models offered causal relationships that could provide guidance to policymakers. These indicators were used in Chile’s national strategy to manage the reopening of the economy, known as Paso a Pasoopen in new window (Step by Step) which is still in progress.

As Covid continues to spread and policymakers try to balance economic activity with public health, lockdowns remain one of the main non-medical tools used to slow infections. Yet Weintraub notes that reducing people’s mobility is a drastic measure, particularly if it is implemented without complementary policies that address the socioeconomic disparities that make it difficult for many people to stay home for days or weeks at a time. “This leads us to think about more nuanced policies,” he says. “Maybe not restricting mobility as much but restricting the risky interactions.”

Tweets by @forbesindia
From Bill Gates to Jeff Bezos: Food for thought by, and on, billionaires
Will Hong Kong reopen for business under new leader John Lee?