Prime Minister Narendra Modi's Start-up Action Plan gets a thumbs up for its stated goals, but the jury is still out as the fine print is being read 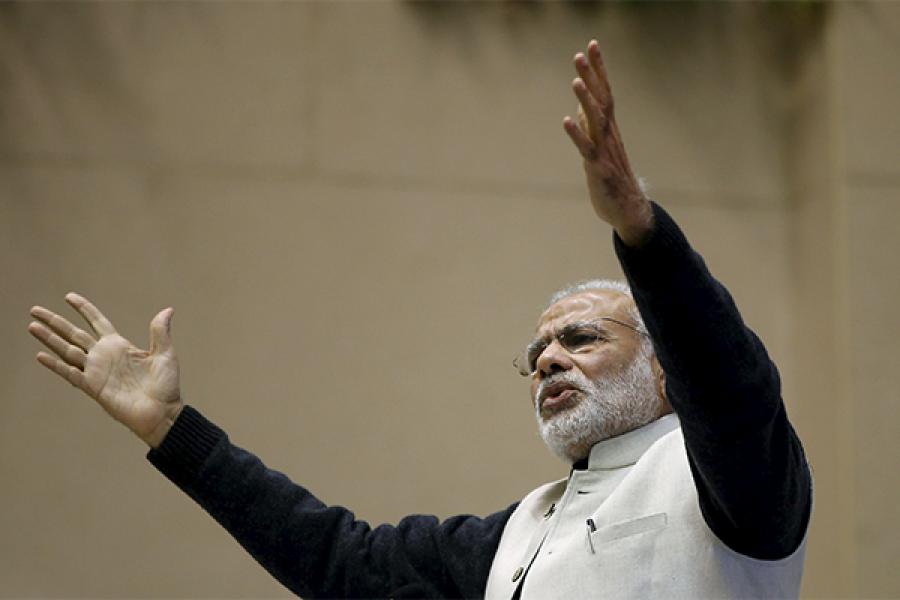 Image: Adnan Abidi / Reuters
India's Prime Minister Narendra Modi gestures as he addresses a gathering during a conference of start-up businesses in New Delhi, India, January 16, 2016. Modi launched a number of initiatives on Saturday to support the country's start-ups, including a 100 billion rupee ($1.5 billion) fund and a string of tax breaks for both the companies and their investors

Live long and prosper! This iconic line from Star Trek — for reasons unknown, but in hindsight apt— was used to sign off from the Start-up India event held in Vigyan Bhawan, New Delhi on January 16. The government sponsored one-day conclave ironically didn't have India’s top billionaires mark attendance. A point that Prime Minister Narendra Modi and Finance Minister Arun Jaitely were cognisant of.

“It’s probably the first time I see a large number of potential entrepreneurs here most of whom, at least I must confess, I’m not familiar with. Otherwise, at all these formal launches we always have the usual suspects,” said Jaitely in his speech at Start-up India.

India’s future millionaires and billionaires were present in rank and file as Modi unveiled a 19-point Action Plan to take forward the startup culture, which has firmly taken root in the minds of India’s youth. The Action Plan read of tax sops, funding, ease-of-doing business, innovation, among a host of other grand commitments that would help entrepreneurs to start and grow their businesses. The timing couldn't have been more appropriate. Last year, over 80,000 jobs had been created in the country by startups according to data supplied by IT industry body Nasscom. Besides, the number of active investors in Indian startups had more than doubled last year to 490 from 220 in 2014, as per the Nasscom study. The scale of startup action in the country has been nothing but stupendous and the government has taken note of that.

Even Modi jokingly slighted himself at not being able to ride the startup wave. “I wonder why a chaiwala (referring to himself) didn’t think of starting a hotel chain,” said the Prime Minister, as he meant to praise the efforts of 22-year-old Ritesh Agarwal, founder, OYO Rooms. The startup, an online hotel room aggregator, operates more rooms than one of India’s top hotel chain the Taj Group.

Leaving aside all the fine words spoken by ministers and bureaucrats, and the government’s show of camaraderie with budding entrepreneurs, can the Start-up India Action Plan really help foster entrepreneurship in the country and take it to the next level?

Directionally, the Action Plan got a thumbs up from all stakeholders in the startup ecosystem — entrepreneurs and investors — but the jury is still out on the fine print.

Some stakeholders of the Indian startup ecosystem had raised concerns about the fact that the top 200 startups in India have re-domiciled their headquarters outside the country, primarily to the US and Singapore, in a bid to enjoy more freedom in doing business. In light of this a think-tank initiative ProductNation had identified 34-key issues, which was a Stay-in-India checklist, that needed to be resolved immediately to stop the exodus.The list included issues ranging from company incorporation to fund raising, operations, taxation, exits, closure, payments, and intellectual property.

While the government’s Action Plan touched upon most of the subjects, “the tangible progress on Stay-in-India checklist has been modest,” says Sharad Sharma, co-founder and governing council member of iSPIRT(Indian Software Product Industry RoundTable). ProductNation is being driven by iSPIRT. While not elaborating on where the government fell short on expectations, Sharma added, “We are hopeful that many more issues can be resolved in the budget.” Ravi Gururaj, chairman of the product council at Nasscom, agrees and says that there are “still some things” that attract entrepreneurs to set up elsewhere.

On the other hand Kris Gopalakrishnan, co-founder of Infosys and chairman of CII’s Innovation and Entrepreneurship Council, believes that 2016 is “great year” for starting a business in India.

“Startups can invest more in the early years due to the income tax breaks. There is more funding support directly through the money allocated for Fund of Funds and easing the capital gains rules,” says Gopalakrishnan, who is also the chairman of Axilor Ventures, a Bengaluru-based incubator that mentors startups and funds early-stage ventures.

The Action Plan stated that profits of startup would be exempt from income-tax for a period of three years. It also said investors would get a tax exemption on capital gains, in a bid to help startups attract more investments. The government also announced its intention of providing financial support through a ‘Fund of Funds’ which would have a corpus of Rs 10,000 crore. Public sector behemoth Life Insurance Corporation will be a co-investor in this fund.

Manish Kumar, co-founder and CEO, GREX a platform for startups and unlisted companies to raise funds, says the tax breaks on profits would only benefit service oriented startups which generate revenue from the start. “However, it will not be effective for product companies which have a longer product development cycle and which may have a longer profit horizon,” adds Kumar.

In regard to the capital gains exemptions he says, “The devil will lie in the details of how it is implemented. More details on this will be keenly anticipated.” And rightly so. The fine print of the Action Plan reads, “the exemption shall be given to persons who have capital gains during the year, if they have invested such capital gains in the Fund of Funds recognised by the Government.” The wording definitely creates a large grey area for startup investors.

That said, the Action Plan made a big impact on the ease-of-doing business aspect that has been worrying entrepreneurs. One such example, is the launch of a mobile app (from April 1, 2016) that would help startups register their companies in one-day and would also help them to file for clearances and approvals.

Ajay Kela, President and CEO, Wadhwani Foundation, which focuses on large-scale education led initiatives driving skill development and job creation, believes that the mobile app is a “game changing” policy initiative. “It will destroy the red tape tag associated with India and initiatives such as these will dramatically impact our ease-of-doing business ranking.  It is a huge boon to entrepreneurs as it allows them to focus on their core business,” says Kela.

Kela was equally enthused by the Action Plan’s stated mission to fast-track patent filing by startups. They are also eligible to an 80 percent rebate in patent filing. “Streamlining and simplifying the patent process along with a rebate incentive not just ensures the safety of the investment in the IP but also encourages a culture of innovation and recognition, especially in a globally competitive patent market,” adds Kela.

The other key aspect of the 19-point Startup Action Plan was the provision to allow startups to close down within 90-days. This provision has been incorporated in the Insolvency and Bankruptcy Bill 2015 that has been tabled in the Lok Sabha last month. “I particularly welcome the announcement of closure of a startup in 90 days which will release the energies of founders of failed startups to do it again,” says Harish HV, Partner – India Leadership team of Grant Thornton India LLP.

Saurabh Srivastava, founder, India Angel Network, says, “Making it easy to start and close a company, coupled with the self certification on nine labour and environment laws will help entrepreneurs focus on their business."

Another noteworthy point in the Action Plan is the decision to relax norms for startups, particularly for those in the manufacturing sector, when in it comes to public procurement. As detailed in the Action Plan: “Typically, whenever a tender is floated by a Government entity or by a PSU, very often the eligibility condition specifies either “prior experience” or “prior turnover”. Such a stipulation prohibits/ impedes startups from participating in such tenders.”

Even as the fine print gets read the full impact of the Action Plan will only be known after the Union Budget is presented in parliament — in regard to the tax sops and budgetary allocations for funding.

Samay Kohli, co-founder and CEO, Grey Orange Pte Ltd, was all similes as he told Forbes India, “I was looking at registration, public procurement and patent registration, and they all figured in the Action Plan.” Kohli, who was Forbes India’s 30 Under 30 winner last year , adds, “The problems that we faced in the initial three to four years are covered (in the Action Plan) and entrepreneurs will now have different problems to fight than these basic ones.”

But for now we should savour the moment. And as Srivastava says, “Raise a toast to the Prime Minister and dare to dream of what he might have unleashed.” The Indian IT Industry, driven by first generation, middle class entrepreneurs, grew from $50 million to $ 150 billion in 25 years. "This happened in the India of yesterday, in fairly adverse circumstances at home and abroad . Think of what Indian entrepreneurs might do in the new environment," points out Srivastava.
(With inputs from Shutapa Paul in New Delhi)