From providing co-working space to acting as incubator and helping build a network, the startup has turned out to be a community space for entrepreneurs 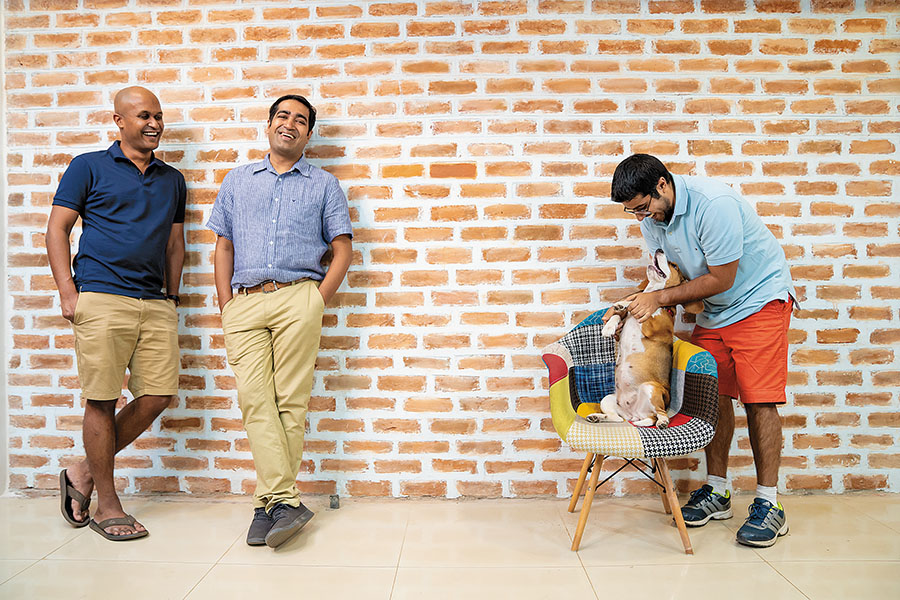 On a balmy evening in November 2018, the auditorium at a co-working hub at Santacruz in suburban Mumbai was brimming with a discerning audience of roughly 100. Lucy Plummer, head of content and community at Clap Global, a platform that enables a unique exchange of cultures by helping international travellers visit local classrooms and engage in conversations with students, had just 400 seconds to make her presentation. The topic of the talk, at an event hosted by 91springboard, was: ‘How travel helps transform bias’. It was a Japanese storytelling event called PechaKucha—or chit-chat—that lets speakers use 20 pictures, each that’s on screen for not more than 20 seconds, to narrate their story.

“The more I travel, the more opportunities I get to come face to face with my biases,” Plummer told the audience. For instance, in 2015, an unexpected encounter with an elderly lady in a Tibetan refugee camp in North Karnataka made Plummer uncover a bias she didn’t know she was harbouring: ‘Good people (the West)’ and ‘bad people (the East)’. “That bias ends with me,” she said, as the audience sprang to its feet and cheered.

Like Plummer, Manish Singhal too was exploring his space at one of the hubs of 91springboard. The founding partner at pi Ventures, an early stage venture fund that focuses solely on areas of applied artificial intelligence (AI), machine learning (ML), and the Internet of Things (IoT), was doing something that venture capitalists are not used to: Pitching his firm to entrepreneurs (it’s usually the other way around).

“We find, fund and support the best teams who are using AI, ML and IoT to solve real-world problems,” Singhal told entrepreneurs working out of the co-working hub. He was part of Reverse Pitch, one of the events organised by 91springboard where investors pitch to startups.

So what exactly is 91springboard? Well, it doesn’t quite fit in the conventional definition of co-working. From providing space to work to being an incubation centre that invests and nurtures startups to evolving as a networking hub for entrepreneurs and corporates to emerging as a cultural hub that hosts events, 91springboard has carved a niche for itself in a cluttered me-too market where co-working has attained a connotation of being a ‘plug and play’ area, marked by funky interiors, wide space to place some pool tables, a café and, in a few cases, a bar.

“Co-working is not just a space to work. It’s to co-work, network and grow,” says Pranay Gupta, head of sales and partnerships, and one of the four co-founders at 91springboard, which started in 2013 in Delhi, and now has 20 hubs across nine cities, including Bengaluru, Hyderabad, Pune and Goa. “While others might be infrastructure-focussed co-working, we are community-focussed co-working,” says Gupta, who along with his partners relocated the company headquarters to Goa a year and a half back. Reason: Not to hunt for another differentiation, but to find the ‘right’ space.

DELHI TO GOA
Delhi pollution, avers Varun Chawla, head of expansion and co-founder, was taking a toll on productivity and happiness of the employees. The parameters for selecting a new headquarters were simple: Quality of life, ability to attract talent, and a place where they wouldn’t be disconnected from the pan-India action. The initial shortlist, after a few months of brainstorming, had Chandigarh, Vizag, Kochi, Jaipur and Ahmedabad. All of them, however, lacked one of the three requisite qualities.

Goa popped up as a wild card, and was selected after a recce that lasted a few months. “It was a unique choice, and has paid off handsomely,” says Chawla, adding how Goa succeeded in attracting senior talent from Mumbai, the United Kingdom and Australia.

91springboard, insists Chawla, is not the odd one in selecting Goa for its base. A handful of high-growth companies such as Delhivery have started to look at non-traditional and non-metro markets to set up their headquarters. “More new-age founders are starting to think this way,” he says. 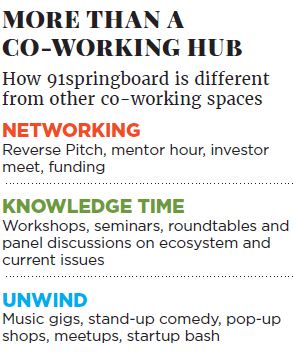 The goal, Chawla asserts, is to empower and enable entrepreneurs in their journey. Take, for instance, Reverse Pitch, which has seen participation from investors such as like Accel Partners, Saif Partners, Matrix Partners, M&S Partners, Sequoia Capital, Kae Capital and Lightbox. The venture capitalists, for a change, speak about their operational experience, sector focus, portfolios, ticket size and key aspects that go into investment-making decisions. Then there is the ‘Startup Open House’, where select entrepreneurs showcase their products and get qualitative feedback from potential consumers, partners, investors and mentors.

Music gigs, stand-up comedy, pop-up shops, investor meets, mentor and unwind hours are some of the other events that the co-working-cum-incubation hybrid undertakes to build a vibrant network of the startup and entrepreneur-driven community.

Collaboration is another crucial ingredient in fostering strong ties among the startup community. Take, for instance, the tie-up with Google in 2018 to train women entrepreneurs across tier II cities. The aim is to educate and upskill female entrepreneurs over a period of two years, with 24 engagements planned across the country. There are more corporate tie-ups with companies such as Facebook and HDFC as well.

It’s the out-of-box thinking of the co-founders that has made 91springboard stand out in a country that been experiencing a co-working boom over the last few years. 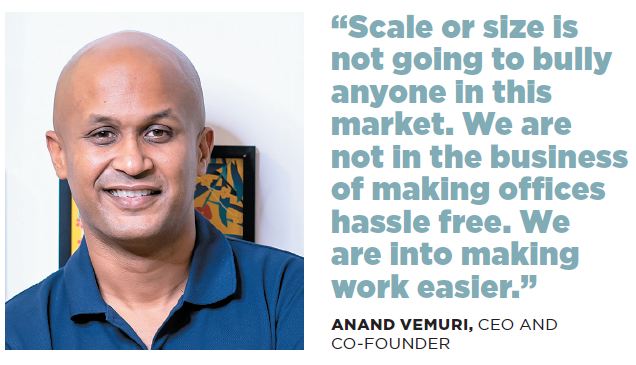 SPACE EVERYWHERE
Since 2006, co-working space in India has doubled every year. Last year, the country had over 350 co-working operators with 1,000 centres in urban India. The world’s third biggest startup nation also managed to attract New York-headquartered co-working giant WeWork, which opened its maiden centre in Bengaluru in partnership with the Embassy group in 2017.

Demand for co-working space is set to skyrocket in India. Over 13.5 million people are estimated to work out of co-working spaces by 2020, according to JLL, a real estate services company. In India, the growth of flexible office space was expected to grow at 40–50 percent in 2018. Released in 2018, the report: ‘Spotting the opportunities: Flexible space in the Asia-Pacific’ claimed that demand for flexible offices is growing faster in Asia-Pacific.

Out of an estimated 13.5 million users by 2020, half will be from enterprises, which are expected to take up 10.3 million seats. Freelancers and small & medium enterprises (SMEs), the report points out, are expected to contribute 1.5 million users. The startups, on their part, will demand up to 100,000 seats by 2020. While the top six cities will require an estimated 5 million seats in co-working spaces, 8.5 million of the projected demand will be in tier II and III cities.

For 91springboard, operating out of Goa with an eye on the rest of the country came with its set of challenges. If getting hold of investors in the early phase was a tough task, seeding the idea that co-working could double up as incubators was equally challenging. In three years, the startup managed to log a meagre ₹1.3 crore in revenue in the March 2016 ended fiscal. The big leap came a year later, with revenue growing to ₹19.8 crore. The momentum persisted and the startup closed the year ended March 2018 with a top line of ₹45 crore. The company is now set to open centres in Chennai, Ahmedabad, Kolkata and Chandigarh over the next 12 months.

In terms of funding, 91springboard has managed to raise over $33 million so far from investors, including Sandway Investment. The latest round was in September 2018 when it raised $10.2 million from investors such as Singapore-based marketing technology company FreakOut and Shinsei Bank of Japan.

Though 91springboard has managed to find a sweet spot with investors and entrepreneurs, the challenge is to take on the financial might of the big global guys like WeWork, which intends to expand at a breakneck pace and double its co-working space to 6 million square feet in India by 2019. Then there is another homegrown player Awfis, the most funded Indian player in this space, having reportedly raised a total of $51 million.

While acknowledging the deep pockets of MNC rivals, Anand Vemuri, chief operating officer and co-founder of 91springboard, is confident of maintaining and expanding the ‘differentiated space’ for his startup. 91springboard, he reckons, is in a long-term game, where infrastructure is just one part of the story. “Scale or size is not going to bully anyone in this market,” avers Vemuri. “We are in the business of making work easier and building a community.”