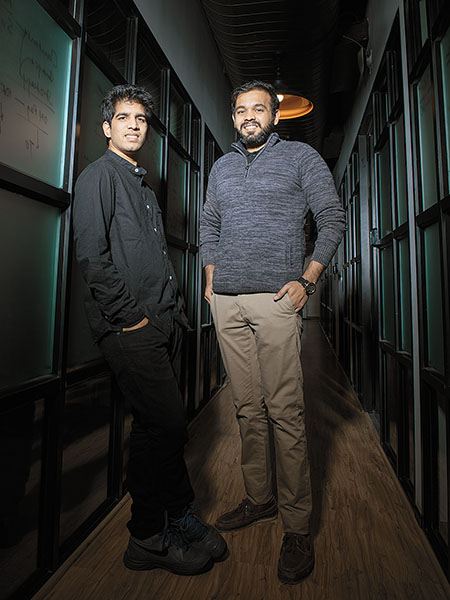 Mukul Rustagi (left) and Bhaswat Agarwal started Classplus last January
Image: Amit Verma
In September 2018, when Abhitesh Sisodia and his wife, Priyanka, who run Percentile Classes coaching centre in Bhopal, realised it was becoming somewhat tedious to keep track of the performance and attendance of their growing numbers of students, they knew it was time to embrace technology.

The Sisodias started Percentile Classes in 2012 to prepare aspirants for CAT and GMAT exams, and have over 200 students. But as is the case with such coaching centres, they functioned out of brick-and-mortar classrooms, and tackled everything, from lectures and attendance, on their own on paper.

“We had numerous batches to take care of,” Priyanka says. “Parents were worried about their children’s attendance, and wanted to monitor their performance. Students also wanted to access lectures when they were not in the classrooms.”

That’s when they found out about Classplus, a New Delhi-based startup by Mukul Rustagi and Bhaswat Agarwal, that helps tutors manage their classrooms through a mobile app. Classplus, which was launched  in January 2018, operates in 28 cities and has signed up more than 1,200 coaching centres; in 2019, it intends to increase that number to 10,000.

Classplus has developed a technology-based platform that can help institutes eliminate time-consuming activities such as creating assignments, learning videos, and tracking attendance. They also have a data analytics tool to track students’ performance. Coaching centres have to pay a subscription fee of ₹15,000 to ₹50,000 per year, depending on their requirements. They can then download the app for tutors, parents, and students.

The platform can provide tutors with insights about the learning patterns of students, their strengths and weaknesses, says Rustagi, 26, co-founder of Classplus. “Our target is the small-and medium-sized coaching centres across the country. We want to ensure that activities such as fee payments, dissemination of content, tests and queries can be made available online so that tutors can focus on teaching.”

The bulk of the company’s operation is centred in New Delhi and Kota, in Rajasthan, a coaching hub for aspirants to the IITs.

“These days, everybody has a smartphone, and user engagement is fastest on mobile phones,” Rustagi says.

Incidentally, Rustagi and Agarwal had met at a coaching centre in Delhi in 2007 when they were preparing for their Joint Entrance Examinations. While Rustagi went to IIT-Roorkee, Agarwal went to Netaji Subhas Institute of Technology in Delhi; both of them studied electronics and communication engineering. After graduation, Rustagi worked at Futures First, a derivatives trading company, while Agarwal at Microsoft.

In 2015, they teamed up to work together, and launched Classplus by 2018. They have raised over $500,000 from investors including LetsVenture, Manish Amin, founder of Yatra.com, and Pallav Pandey, founder of Knowlarity and Fastfox. Classplus applied for, and was selected by, Amazon’s EdStart programme, a global initiative under which the latter provides technical support to education technology startups.

According to the National Sample Survey Office, India is home to the largest after-school tuition market in the world, with more than 7.1 crore of the country’s 30 crore school-going students taking supplementary coaching classes; in some states, more than three out of every four students opt for it. The increase in the number of smartphone users in India—expected to reach 990 million by 2020, up from about 800 million in 2015, according to Cisco—signals a growing opportunity for companies such as Classplus.

Although firms such as Delhi-based Proctur, Nagpur-based Techior and Classcare offer similar class management services online, Rustagi claims these services focus on colleges and schools, and not on small tutors. “Many of the companies offer only one-way communication on their platforms,” he adds. “What differentiates us is the technology, the multimedia abilities, and the two-way communication, in addition to the focus on mobile first.” Classplus features allow communication between students, parents and teachers on issues such as doubt resolution and performance management. Tutors can also store content on the cloud and multimedia platforms.

“There are no dominant players in the industry they are in,” says Aurobindo Saxena, who heads education practice at Technopak Advisors. “The industry is unregulated, and has a compounded annual growth rate of 20 percent. The tutoring industry in India is worth $11.5 billion, and is highly fragmented.”

“Their business model is very easy to replicate,” adds Saxena.

“That is a cause for concern.

There are very low entry barriers, and over a period of time, the subscriptions can become cheaper. But considering the fragmentation, they have the potential to emerge as a big player and perhaps make themselves attractive to large edu-tech companies. They also have to ensure that they have a strong innovation pipeline to be on top.”

Rustagi believes he has a strong pipeline and the goodwill to scale up. “The beauty is that we have a common tech platform that can be scaled since we aren’t customising them for tutors,” he says. “We are also working on identifying patterns and predictive analysis for the coming years. This year, between 10 and 15 percent of our business came from referrals; we want to take this to 50 percent in 2019.”

But what about competition? “This is a very fragmented market, and we are the only funded company here,” says Rustagi. “It is not an easy task to get tutors on board, and we have already laid the groundwork by winning their trust.”

Tweets by @forbesindia
What excites me most is that we have a profitable unicorn: Rishi Khosla
Vishal Bali: A specialty touch