India's space programme has, so far, been a government backed effort with Isro. With new technology and falling costs, a clutch of space technology startups are garnering domestic and global clients 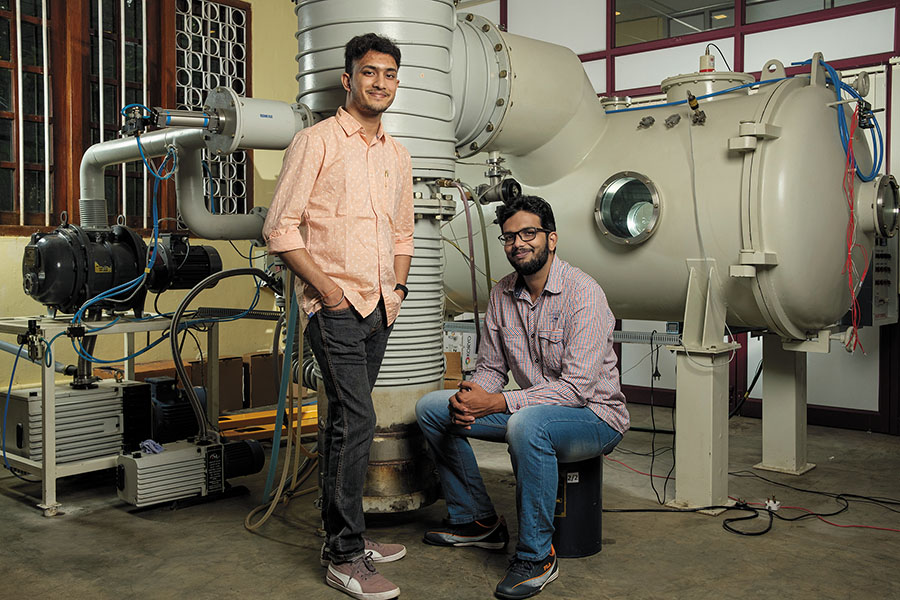 (From left) Rohan M Ganapathy and Yashas Karanam, co-founders of Bellatrix Aerospace
Image: Nishant Ratnakar for Forbes India
Bellatrix Aerospace, a space technology startup in Bengaluru, has its roots in a project that co-founder Rohan M Ganapathy had worked on while at college in Coimbatore. In his second year of aeronautical engineering, he had visited Nasa in the US and had been exposed to the concept of electric propulsion for satellites as against the conventional chemical-burning ones.

Back home, Ganapathy started building an electric thruster—with a grant of ₹20 lakh from JSW Steel—hoping it would help him leapfrog into a doctoral programme after his engineering degree. He graduated and, by 2015, built a proof-of-concept version of the thruster, called microwave plasma thruster. That year, he co-founded Bellatrix with his friend Yashas Karanam, an electrical engineer, and the venture was incubated at the Indian Institute of Science’s (IISc) Society for Innovation and Development in Bengaluru.

This June, Bellatrix announced that it had secured $3 million in pre-series A funding from a clutch of investors led by venture capital (VC) firm IDFC-Parampara, and including the Munjal Group and actor Deepika Padukone’s KA Enterprises. One of the reasons investors found Bellatrix attractive was because it’s the only venture in India to have a development contract from Indian Space Research Organisation (Isro) for its microwave plasma thruster, says Jatin Desai, general partner at Parampara Capital.

The development contract is unique because instead of giving a blueprint of a product, Isro has shared a problem statement with Bellatrix, and the startup is coming up with the technology and the eventual commercial product. “Normally Isro develops the technology, and gives contracts to vendors to build the product according to Isro’s design,” says Karanam, co-founder and COO at Bellatrix. “In our case, they have only given the specifications. We are developing the technology and solution and giving it to them.”

India’s space programme has thus far been a government-backed effort. But now that is changing, with the emergence of a clutch of space technology startups. From propulsion and rocket technology ventures such as Bellatrix, to satellite makers such as Dhruva Space and Team Indus that aspire to bid for entire programmes rather than supply piece-meal components, there are now about two dozen startups in this field compared to only a handful three years ago.

Dhruva Space, based in Bengaluru and Hyderabad, started in 2012 with the aim of building India’s first private commercial satellite, says co-founder Sanjay Nekkanti. Today the company is in talks with a potential customer to build about 70 small satellites that can be launched as a constellation. At Astrome, another startup based in IISc, founders Neha Satak and Prasad HL Bhat are building a constellation of almost 200 satellites that can beam the internet back to earth from low orbits. At Kawa Space, founder Kris Nair is taking a platform approach and focusing on corporations that can use space-based applications by renting Kawa’s cloud-based technology. Kawa has raised an undisclosed amount in a pre-series A round from investors including Vijay Shekhar Sharma, founder of Paytm, and Speciale Invest, a firm that operates from Bengaluru and Chennai.

What has changed
One of the factors helping the rise of these startups is the miniaturisation and affordability of satellite technology. A satellite the size of a shoe-box can support all the functions and applications of a satellite that would fill a small room 10 years ago. If a company wants a decentralised network to store data, without any connection to the internet, then small satellites could be the answer.

Costs have come down significantly too: Consider Iridium, a Motorola-owned company started in the late ’90s that spent over $5 billion building a constellation of satellites to support satellite phones in the pre-mobile phone era; today, it would cost less than $50 million—a 100-fold reduction, says Nekkanti. Two or three years ago, sending a 1 kg-payload into space would cost $150,000 to $200,000. Today it costs less than $30,000. The maturity of electronics, the increase in the number of rocket launches, and rapid advances in multiple technologies have caused this drastic reduction in costs. “We are living in the golden age and in 10 years the industry and the kind of applications you’ll see will be very different,” Nekkanti adds. “Until Apple launched its smartphone with the concept of apps, no one had done it before. The same will be the case for satellites.” 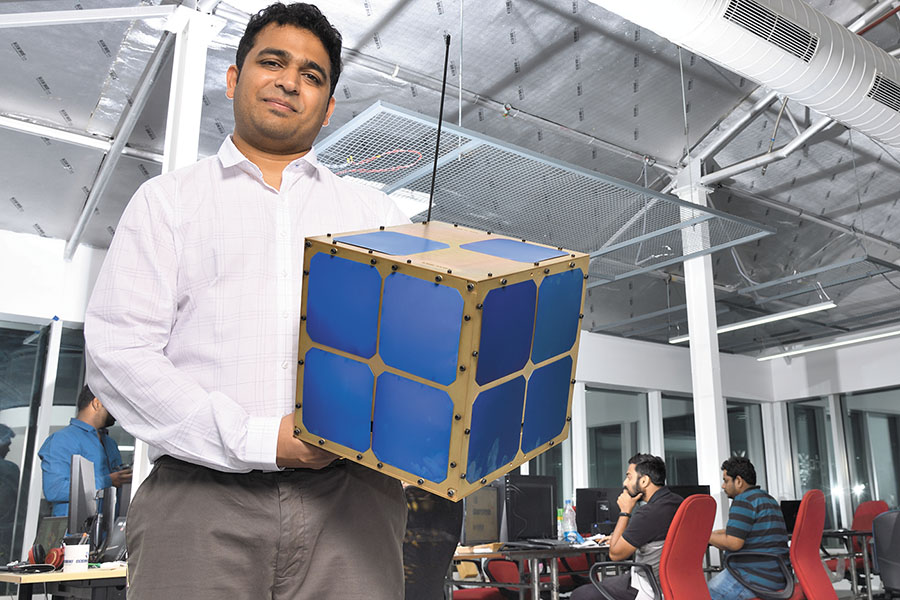 Today, people think space technology is expensive, but companies such as Bellatrix, Dhruva and Kawa are making it affordable. Nekkanti adds MNCs should look at India for affordable solutions for global markets. In a market report by Space Angels, an early-stage investor in space startups, the average cash-burn rate for a space company is estimated to be $300,000 (₹2 crore) per month. The same amount in India can be stretched to a year, Nekkanti says. “It’s like the IT industry all over again.”

In the hi-tech manufacturing and other allied domains, India’s space programme is known all over the world, although without any big private names. That is exactly what is going to change. “Our customers are global, and we are executing from India,” says Nair of Kawa Space.

Big opportunity for small satellites
The microwave plasma thruster is just one of the products that Bellatrix is building. The venture aims to be a full-solution vendor, focusing on the entire satellite propulsion requirement, across different satellite weight categories. This is because large customers—be it Isro or private conglomerates like Boeing or Airbus—would prefer to deal with as few vendors as possible. Ganapathy and Karanam figured they stand a better chance of winning orders if the technology was usable across different classes of satellites.

They are therefore working on three different products: The microwave plasma thruster caters to heavier satellites that weigh 2 tonnes or more and are typically geostationary; the second product is a thruster with an environment-friendly monopropellant that is safe for humans, and an alternative to the conventional hydrazine, which is extremely unstable and highly carcinogenic; the third is Chetak, a two-stage rocket to launch satellites using a blend of methane and liquid oxygen as propellant.

“We are trying to build all the systems around our products,” says Karanam. “The main challenge is export restrictions. Today I might get some parts, but tomorrow my product line may have to stop,” if the relationship between India and typically an advanced economy like the US or a Western European country sours. Therefore Bellatrix is trying to indigenise the major components. “Since it is all defence critical [technology], independence is the best approach.”

Another product that Bellatrix is working on is the nano thruster, built for nanosats that weigh up to just 10 kg. Since they are small, the size and weight of these satellites limit what can be included in them. One of the reasons propulsion for nanosats is becoming important is because they add to space debris in low orbit regions of 200 km to 2,000 km above earth. Nanosats form large satellite constellations, the kind being planned by multinational corporations such as SpaceX, Amazon and OneWeb.

When such constellations are built, every nanosat has to have its own propulsion system. “It’s like the formation flying of birds,” Karanam explains. If the satellites have to maintain a specific formation to cover a specific geographic area on earth, transmit data and so on, they need active propulsion systems to move as needed.

Global regulations are leaning towards making propulsion systems mandatory on nanosats so that they can be brought back into the earth’s atmosphere, where they will burn up, and not add to space debris. “Propulsion systems are becoming critical and this is where we are positioning our nano thruster, which is small, compact, and power efficient,” Karanam says.

Expanding client base
What is also growing is the ecosystem of customers to use the products and services of these startups. For instance, Kawa plans to send into low- and medium-orbit between 40 and 50 satellites that other companies will be able to rent. “We will make all of this available to our customers through a simple API [application program interface], so that their data centres can hook up to the Kawa cloud and start getting results within a week,” says Nair. Kawa already has six “anchor customers” in areas such as infrastructure, financial services, agriculture, risk management, and private equity.

Potential customers can be other startups too, and not just conglomerates. An example is Bengaluru’s SatSure, which uses satellite remote sensing data and big-data analytics to sell applications in multiple verticals, including fintech and sustainable development projects. Another potential category of clients could be countries that don’t have their own space programmes and are considering the use of constellations of satellites.

“Globally, the areas in which they are working, including thruster systems for satellites, are seeing huge growing demand,” says Desai of Parampara. “We see a lot of demand for the small- and medium-sized satellites and for such satellites to be sent into the low orbits.”

Earth observation, imaging, navigation and technology applications with an increased thrust towards the utilisation of the low earth orbit are areas that will see the rise of private space startups in India. The next phase of India’s space faring will see an unprecedented level of private enterprise, thanks to these startups.