All heart and sole: This dynamic duo upcycles discarded shoes into slippers for tribal kids 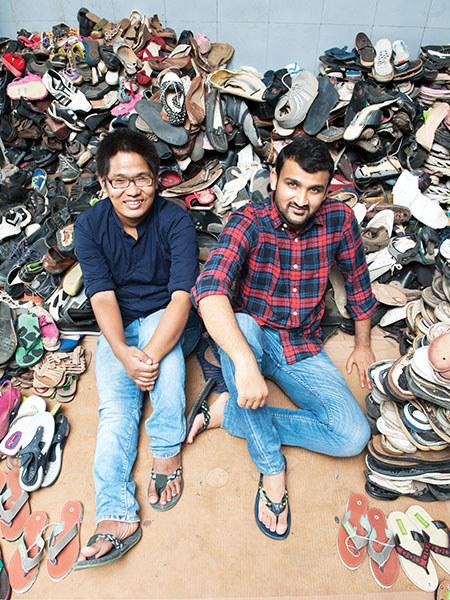 Ramesh Dhami (left) and Shriyans Bhandari bonded over running and ended up starting a business, GreenSole, which upcycled 35,000 pairs of shoes in 2017
Image: Mexy Xavier

Ramesh Dhami, 22, had reached Mumbai from a village in Uttaranchal in 2006 as a pre-teen to become an actor. Homeless and penniless for several months, he was taken in by an NGO, where he started running as a recreational activity. Udaipur resident and marathon enthusiast Shriyans Bhandari, 23, had come to Mumbai in 2012 to complete his undergraduate studies. Every evening, he would meet Dhami at Priyadarshini Park, on Napean Sea Road, and train under a coach. Hardcore running would wear out their shoes in a few months and, every year, the duo ended up discarding three to four pairs.

Dhami, who spent much of his childhood without shoes, picked up one such torn pair that had its soles intact, and, with some rubber strips added to the sole, made a pair of slippers out of it. When Bhandari saw that, he sniffed an idea that could be scaled up. “About 35 crore pairs of shoes are discarded every year globally, adding to landfill. This is in contrast to the World Health Organization’s estimates of about 1.5 billion people, about 24 percent of the world’s population, who go shoeless and pick up soil-transmitted infections. This could be the solution,” says Bhandari.

Dhami and Bhandari started small in 2013, when they put up a box at Priyadarshini Park to collect discarded shoes. They followed up an hour of running with half an hour of brainstorming, which resulted in a bunch of refurbished shoes that they donated. “However, as a business idea, it gained traction soon. In one month, we were selected among the top 30 innovators by the Entrepreneurship Development Institute of India, Ahmedabad. We won other design and sustainability competitions too [the IIT-Bombay Eureka competition and the Ridea National B-plan] from where we won a few lakhs. Now we had to spend and innovate,” says Bhandari.

In 2015, Dhami and Bhandari registered their company as GreenSole and bagged their first order from real estate firm JLL. Their corporate social responsibility (CSR) wing asked for upcycling 500 pairs, which Dhami and Bhandari executed in a couple of months, working out of a 100 sq ft space in Mumbai’s eastern suburb of Kurla. But it wasn’t a set-up that would help them reach their milestone of putting footwear for all by 2023. They were soon seen hovering outside the offices of Ram Fashion Exports, a leading shoe manufacturer in Western India, at Mahape in Navi Mumbai, asking the guards if they could be allowed into the shoemaking factory for a peek into the manufacturing process.

“The guard brought me two youngsters who looked politely rebellious,” recalls Nitesh Bhasin, a promoter and director of Ram Fashion Exports. “I heard their story, and felt that we could give them back-end support. We came on board as vision partners. What we do for GreenSole is industrialise the upcycling process, get more database for donations, get more corporates to tie up by using our customer base, etc.” Since 2016, GreenSole has been operating from the office of Ram Exports, located at Mahape’s MIDC Industrial Area, on a road that, fittingly, is constructed by the Navi Mumbai civic body with recycled plastic.

In 2017, GreenSole upcycled 35,000 pairs of shoes and has revised its target to 70,000 this year. The scaling-up has also increased its revenues from ₹20 lakh in 2015-16 to ₹71 lakh last fiscal. “Forty percent of our revenue comes from corporate CSR programmes, 30 percent recycling as a service, and the rest is retail. We plan to reverse it,” says Bhandari, the MD & CEO. At present, GreenSole sells about 14 kinds of footwear through Amazon, select wholesalers and flea markets, and managed to retail about 500 pairs last year. But it is planning to re-launch its retail efforts by the end of May, more than doubling its range to 30.

“ We get requests from various organisations... but our main target is to reach kids from class 1 to 10 in villages where much less than 40 to 50 percent children wear shoes.”

The rise in retail is expected to bring in enough funds that can be channelled into their social venture that will have provided, by June, 1 lakh pairs to underprivileged schoolkids in tribal areas across the country, from Jawhar in Maharashtra to Daringbadi village in Odisha. “We get requests from various organisations after which we do multiple checks through photos and on-the-spot recces. Our main target is to reach kids from class 1 to 10 in villages where much less than 40 to 50 percent children wear shoes,” says Dhami, the director and co-founder, who is in charge of distribution. Over 40 corporates, including Indiabulls, JLL, L&T, and leading shoe brands such as Adidas and Skechers have tied up with GreenSole as part of their CSR responsibilities; they organise shoe collection drives and sponsor the refurbishment of old pairs at ₹199 per pair. Celebrities such as cricketer Harbhajan Singh, TV host Rannvijay Singh and actor Evelyn Sharma have also pitched in with their old shoes.

“We have been involved with GreenSole right from the stage of finalising the location to the distribution of footwear,” says Mohammed Ali Saleem, the director of Indiabulls Foundation, the CSR arm of the Indiabulls Group. “We decided to tie up with them for their novel way of giving back to society. Their initiative involves recycle, reuse with a difference, matching our search for out-of-the-box CSR initiatives.”

GreenSole is also investing in design and R&D to ensure each part of a shoe, and not just the sole, is recycled: Among other ideas are insoles being fashioned into coasters, laces woven into fancy straps and tongues into pouches. That way, the company has reduced carbon footprint by 5 lakh lbs (at 5 lbs per pair) compared to companies that manufacture sneakers from scratch.

Of late, the company has added a third dimension to its efforts, in which it is setting up skilling centres to employ villagers, giving them raw material, machinery and infrastructure and eventually helping them upcycle products for their own community. The first one is almost ready to roll in Jamshedpur with funding from Tata Steel. “That will be true empowerment through sustainable practices,” says Bhasin of Ram Fashion.

That’s not bad for a duo with zero experience in the footwear industry. “But,” says Bhandari, “You don’t need expertise to start a business. All you need are investments, financial planning and a decision on the USP of your product. There are people to take care of the rest.”