ESG Funds: How to invest in a sustainable future

Better sustainability practices are becoming increasingly important to both companies and investors. Consequently, globally common ESG funds, which score environment, social and governance factors, are starting to find a place in India 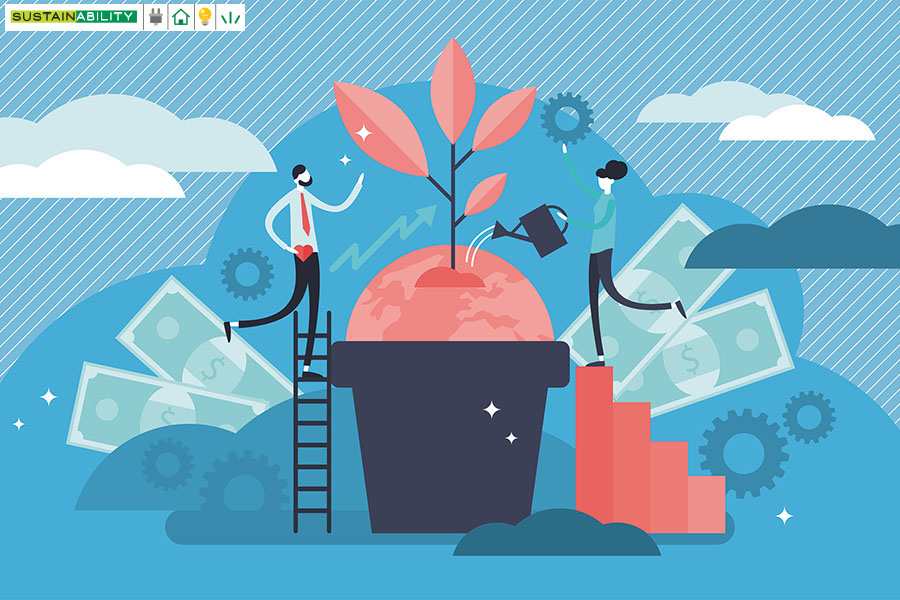 This April, Quantum Advisors and Quantum Mutual Fund sold all the shares of a major engineering and construction company from their portfolios. The reason? Governance issues and “the indifference that the company has shown for willingness to adopt due process”.

“We asked what risk assessment and analysis they had done for the Mumbai Coastal Road project. The Brihanmumbai Municipal Corporation consultants had said in their report that there was an environmental risk. But the company had done no independent risk-assessment,” says Ajit Dayal, who founded Quantum Advisors in 1990. In Brazil, he says, mining giant Vale announced in March that one of its dams was going to collapse, after which it helped evacuate people. This came after another Vale-operated dam collapsed in January, killing 300 people and contaminating rivers. Vale faces about $7 billion in fines and lost 20 percent in market cap in the days after. “If Mumbai gets flooded, or if there is damage, will the company be liable? Ultimately, it would be the shareholders who would have to pay. The CEOs and top management may have retired by then and taken their bonuses and encashed their ESOPs so they will have no personal risk. So we sold our shares,” says Dayal.

While governance criteria have been a part of its investments since 1994, in 2014 the firm started working on an internal scoring system for environmental, social and governance (ESG) factors. Environmental scores are the aggregation of carbon emissions, biodiversity impact and water consumption; the social dimension includes human rights, non-discrimination, health and safety; the governance factor assesses board independence, shareholder’s rights and a company’s business ethics. In June it will launch the Quantum Swachh India ESG Equity Fund to allow investments into “cleaner and greener business”.  The focus would be businesses that ensure sustainable management of natural and human resources, have a diverse organisational structure, prudent management, and a socially responsible framework of business.

ESG Factoring
“We saw a lacuna in India where you had close to $100 billion in equity assets under management but not a single solution for investing in companies that rank highly on sustainable parameters,” says Abhay Laijawala, managing director and fund manager at Avendus. “If capital can be allocated to a sustainable company, it creates a virtuous cycle of investing.” By integrating ESG factors with mainstream analysis, the company aims to identify risks and opportunities that may not have been fully priced in by the markets. “There are some highly-ranked ESG companies that our fund will avoid because there may be issues beyond the ESG ranking that lead us to believe these companies and sectors could be at high risk and pose challenges in the future,” he says, adding that, for now, the weightage to governance will be higher. 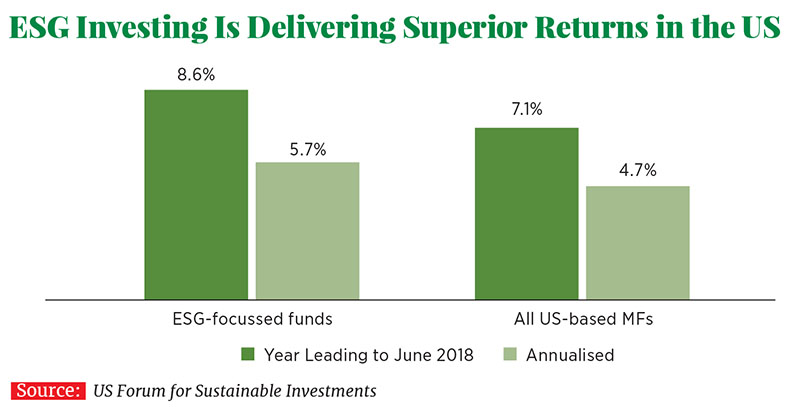 Dayal speaks of Quantum’s three-pronged approach to ESG. Their 20-year-old Quantum Long Term Equity Value Fund always had a governance overlay and was given an ESG filter in 2015. They also took the same data and created the ESG mutual fund for the local market, giving weightage to ESG scores and being valuation agnostic. The third prong is to work with and invest in companies that want to improve their ESG scores. “You identify founders of companies who want to better their scores, who want to do good. We pick up a 5 to 9 percent stake in it, take a board seat and chart out a course on what the company could do with ESG as criteria. Then we help it grow with guidance and money along the way,” says Dayal.

The Quantum-ECube fund will avoid businesses “that, for instance, adversely impact human health or the natural environment or the ability of communities to live with dignity and earn decent livelihoods,” says Rajan. “So businesses that promote tobacco consumption, gambling, alcohol consumption, destruction of forests, largescale displacement of communities, excessive use of fossil fuels and the like, would be excluded from our fund.”

Avendus has tied up with proxy advisory firm Institutional Investor Advisory Services (IiAS) for their ESG rankings, which are calculated from various parameters and company policies. “Say, if a company discharges effluents, and has a policy, it is a plus; if it doesn’t, that’s a zero. Then, to see how much the policy is being implemented, we would look at data over three years to see where it’s moving,” says Amit Tandon, founder and MD of IiAS.

Quantum relies on internal scoring for which they look at sustainability and business responsibility reports, meet company management and visit factories. “We felt the biggest impact we could make at this stage was in the small and mid-cap space, typically evaluating companies with market cap between $300 million to $1.2 billion,” says Rajan, adding that several of the promoters of these companies would like to improve their ESG performance but need the kind of help and operating support they could provide. 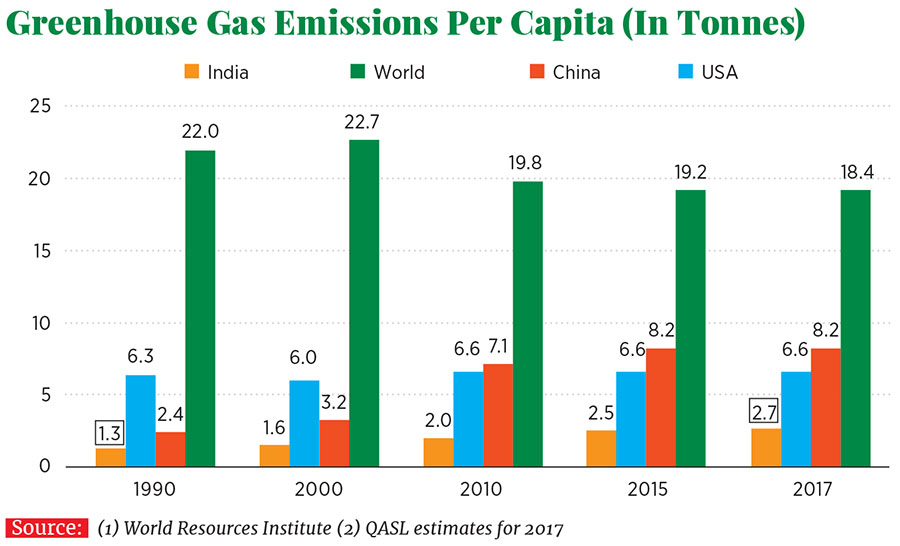 Performance of ESG Investing
ESG funds have been popular globally, with various instances of them helping in risk mitigation. “When we tell investors about Volkswagen, they ask, ‘So, ESG funds had not invested in VW?’ and the answer is no. It was not that the ESG fund knew there was going to be a default by the company on the diesel norms, but because VW scored very low on corporate governance and therefore there was always the risk of an event,” says Laijawala.

ESG is not just a source of risk mitigation but also of value creation. “It is not that green is good at the cost of profit. But how do you define that profitability? Whether as next quarter earnings or next five-year earnings,” says G Maran, co-founder and director of Unifi Capital. The firm started a governance-based fund in 2014 and a green fund in 2017. “If you define that profit in long term merit then you should be in these businesses because they create wealth in the long term better than others.”

Laijawala points to a report asset management firm Amundi released this year that demonstrated that from 2014 to 2017, ESG investing has been a source of high performance in Europe and America. According to the report, 2014 marked a turning point for how the stock market integrated “beyond-financial” metrics. “Close to 30 percent of global assets under management are now investing under ESG. The figure was barely 12 percent in 2012,” says Laijawala. “It will become 75 to 80 percent within the next five years.”

Dipankar Ghosh, partner and leader for Sustainability & Climate Change at Thinkthrough Consulting, says it might take some time but ESG factors are getting their due importance. “Everybody is realising the importance and scarcity of our natural resources. This realisation is also pushing business leaders at the boardrooms to take cognisance of ESG criteria,” he says. Investors are looking at risk assessment and mitigation. “They are insisting on assessments and having a robust strategy, be it climate risk or sustainability risk, thus strongly encouraging the inclusion of such risks in an organisation’s risk universe.”

It is what brought Dayal back from his semi-retirement last year. “I am not an environmentalist, but I can read numbers,” says Dayal. China emits 8.2 tonnes of greenhouse gases per person, and India emits 2.7 tonnes, according to World Resources Institute and QASL data. “India is going to continue to grow. In 16 years from now, if we emit 8.2 tonnes per capita, what China does today, the [Paris Accord] target of 60 billion tonnes becomes 67 billion tonnes. The rest of the world can do whatever ESG tweaking it wants to, but if India does not take a path of responsible growth, then nothing will help and the fight against climate change will fail. We can rely on government diktat and also give market incentives to good companies so that they do the right thing, and the market rewards you with high share prices. Everyone makes money and you’ve cut emissions. Because without the private sector model there is no hope.”