Hasiru Dala is lifting waste pickers up from the dumps 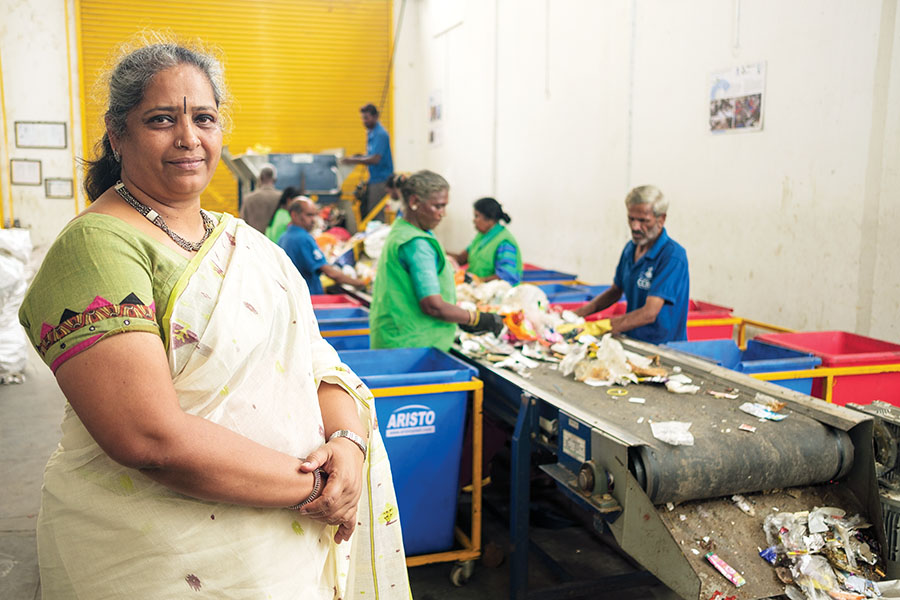 The work done by India’s sizeable army of men and women who dumpster dive, for tradeable plastics, metal, bottles, is invisible; the impact of their efforts, though, is conspicuous—a lot of garbage clearing in India is done informally, by waste pickers who work without any job security, fixed salary or recourse to a social safety net.

In 2012, Bengaluru-based couple Nalini Shekar and Shekar Prabhakar decided to do something for the unorganised waste pickers of their city, where rapid urbanisation is creating an unprecedented waste management crisis. The two founded an umbrella organisation for six NGOs that were already working with waste pickers: Hasiru Dala. The name (meaning Green Brigade in Kannada) was chosen by the waste pickers themselves, recalls Prabhakar, 54, in an interview in his office.

In November 2013, the two started an eponymous trust, which soon approached the Lok Adalat and, with its backing, got the Bruhat Bengaluru Mahanagara Palike (BBMP), the city’s civic body, to issue formal identification cards to waste pickers. For most of them, this was their first government-recognised ID, carrying the municipal commissioner’s signature. “For the first time in the country, an urban local body issued ID cards [to waste pickers],” says Nalini, 53.

So far, around 8,000 such IDs have been issued thanks to Hasiru Dala. Further, urban local bodies across the country are expected to implement similar policies, says Prabhakar. On the basis of the IDs, women have been able to open bank accounts and Hasiru Dala has helped 400 youngsters get education loans from the central government, and 1,800 families were able to avail health insurance from central government schemes.
*****

Nalini, who has a master’s degree in child development, loathed the idea of a nine-to-five job and always wanted to work with marginalised people. In the early ’90s, she had been drawn, through some friends, into organising waste pickers in Pune, where her husband was building a career in the software engineering sector. The result: A workers’ union of waste pickers that has 9,000 members today and through a subsidiary called SWaCH, manages solid waste in Pune.

In the latter half of the ’90s, Prabhakar’s career took him to the US, where Nalini worked with NGOs helping victims of domestic violence and human trafficking. In 2007, the two returned to Pune, and three years later they were back in their home city of Bengaluru where they founded Hasiru Dala.
In 2014-15, two years after founding Hasiru Dala, it became apparent for the trust that the next step ought to be assuring steady incomes for waste pickers. Rules issued in 2015 by the Bengaluru municipal council that it would cease to process waste from bulk generators—apartment complexes with over 50 households and commercial establishments—also helped. They were asked to make their own waste processing arrangements or hire service providers empanelled with BBMP. Hasiru Dala was among the first to be empanelled and within a year was servicing 60 apartment complexes and 8,000 households.

As this started to scale, in November 2015, Hasiru Dala Innovations was instituted as a for-profit business entity to the waste management opportunity. In the process, the company has also helped inculcate a culture of environmentalism and the discipline needed to regularly segregate dry and wet waste at source, which is the individual household. “We refuse to collect unsegregated waste,” says Prabhakar. “From house help to children, we train our clients to segregate [waste].”

“The franchisee model takes the informal sector waste workers, who are already engaged in the waste management supply chain, and makes their access to the waste much more streamlined,” says Avinash Krishnamurthy, chief program officer at Small Scale Sustainable Infrastructure Development Fund and who has worked to help those in the sector, including Hasiru Dala. “The model allows them to operate as entrepreneurs rather than as employees.”

The company broke even within two years of starting, and has been consistently posting modest profits over the last six months, servicing close to 300 bulk waste generator clients comprising nearly 30,000 households. The company helps process close to 800 tonnes of solid waste every month, and it doubled its revenue to ₹5 crore in the year ended March 31, 2018, over the previous fiscal.

And that is just a small pie of the waste management economy in the city. The BBMP spends ₹700-1,000 crore a year for solid waste management, says Prabhakar. Over 70 percent of the waste is handled by private contractors. “Recently, we won a tender from ELCITA, which is the Electronics City Authority, and we’ve started processing waste from 84 companies,” says Nalini. “Now, we are authorised to process e-waste.”

Another line of business that Hasiru Dala Innovations has expanded into, profitably, is the management of waste generated from big events held in the city, such as celebrity shows, weddings, corporate events or even marathons. In the 11 months through March 2018, the company had cleaned up venues after 80 events, and generated jobs that paid ₹550 a day for waste pickers. “We have started a trend of eco-friendly weddings in Bengaluru,” says Prabhakar of his company’s efforts to reduce waste generated during weddings.

This year, the company has raised around ₹1.5 crore from investors including the Tata Trust-backed Social Alpha, Innovent Mauritius and Millennium Alliance.“We want to move up the value chain in waste management, so we are working with an organization called Plastics for Change,” says Prabhakar. The plan is to approach multinational brands and convince them to adopt more sustainable practices, such as using recycled plastics in their packaging. Hasiru Dala Innovations is also in the process of setting up a plastics recycling plant to supply the polymer at competitive rates to these brands. In return, the brands get bragging rights to claim they are environmentally responsible.