Are buy now pay later offers worth it?

They are tempting and often result in impulsive purchases beyond budgets. Experts say BNPL and buy now travel later options are double-edged swords that can impact credit score and lead people into a debt trap 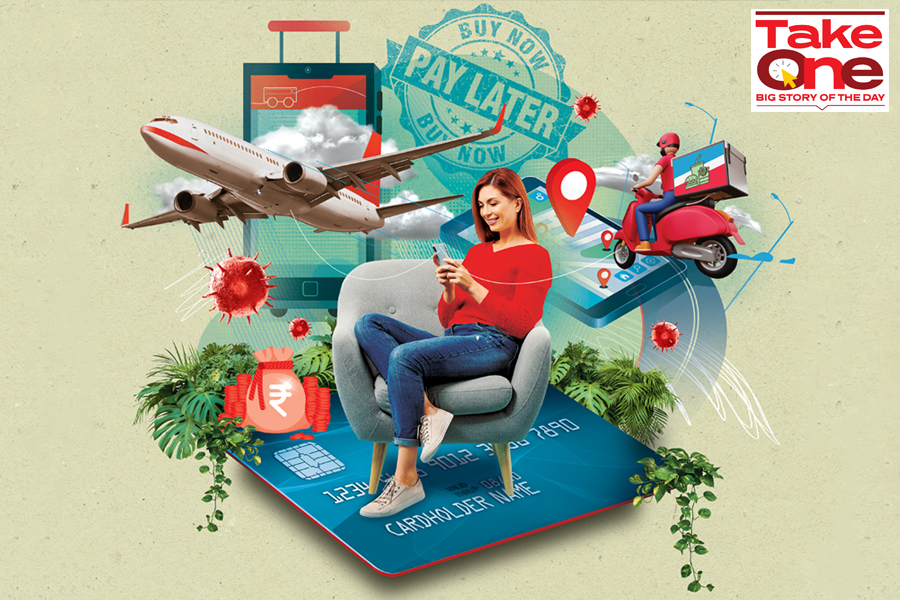 On the face of it, BNPL is an attractive financial model. A short-term financing option that lets consumers buy at a point and pay in deferred repayment tenure, including the option of EMIs after the end of an interest-free period. Imaging: Chaitanya Dinesh Surpur

For Shreya Sharma, 20, a college student in Mumbai, being able to make online purchases without paying that moment has been an interesting leverage. “Many a time, especially by the end of a month, I’d run out of liquid money… it is then that I bank on platforms like LazyPay and Simpl the most,” says Sharma, naming two of the widely-used buy now pay later (BNPL) platforms in India.

When the first few times Sharma chose the BNPL feature—offered by most online B2C aggregators today—she was able to repay in time. The confidence of purchasing first and paying later made Sharma opt for BNPL services for almost every alternative online transactions. “Initially I had a smooth experience because I used to pay back on time, which increased the limit of my spending offered by LazyPay, my most-actively-used platform. My credit limit went from 1,500 to 10,000,” she says, adding that she considered this equivalent to earning. “When my credit limit increased, it felt like I was being rewarded for paying back on time.”

Once using the pay-later option became a habit, Sharma started running into problems. “I made a purchase of around Rs5,000 and missed paying back in 15 days, which is generally the specified time by most BNPL players. The amount I had to pay back ballooned to somewhere around Rs6,200,” she says. This took a hit on her credit score. “From being offered Rs10,000 to spend, my credit limit dropped down to Rs1,500,” she says.

“That’s when I thought of reducing my dependence on paying later as an option until iPhone 14 was launched and LazyPay offered easy loans up to Rs5 lakh,” says Sharma, who took a loan of Rs1.5 lakh to buy the gadget is now repaying through EMI. “In retrospect, I feel it was an impulse decision… a major chunk of my monthly spend goes into repaying the loan which further brings down my buying capacity.”

This put Sharma in a vicious cycle of depending on pay later platforms for immediate requirements. “I still bank on BNPL platforms and my expenditure now is much more than what I would have been spending otherwise,” she says.

LazyPay witnessed a 400 percent growth in the last two years, with 296 merchant partners choosing it as a payment alternative, the company claimed in August. The other major BNPL brands in India include Amazon Pay Later, Simpl, ZestMoney and Flipkart Pay Later. Launched in April 2020, Amazon Pay Later has over 3.7 million registered users, driven by a faster customer sign-up process, and its wider use cases for goods purchases and utility payments, Amazon said in a statement. BNPL transactions on ZestMoney surged by 300 percent in 2021 compared to 2020, according to the platform's 'The India Buy Now, Pay Later Report 2021'. Most of ZestMoney's customers median was in the 23 to 26 years group, the report said.

On the face of it, BNPL is an attractive financial model. A short-term financing option that lets consumers buy at a point and pay in deferred repayment tenure, including the option of EMIs after the end of an interest-free period. The option is most actively used for platforms like ecommerce, electronics, food delivery and travel aggregators. With the increasing preference for the pay later model, travel aggregators are curating packages for domestic and international travel with the travel now pay later (TNPL) option.

Mumbai-based architect Aanya Chopra (name changed), 24, relied regularly on BNPL for small-value online purchases which she was able to pay back in time. This gave her the confidence to book a round trip to Thailand offered by zyppys.com. “We planned a week-long trip for which we paid back within the specified time and didn’t incur any extra charges. Shortly later, we planned our second trip to Bali through another travel website where we only had to pay around Rs10,000 upfront. This time, we missed paying back in time. This led to a huge interest of close to 25 percent on the total due, which made our trip much more expensive… more than we could afford,” says Chopra. “This took a massive hit on our budget and we had to liquidate an investment to be able to pay back the due amount.”

“We chose everything out of our budget—booked a luxurious trip without seeing through the consequences of non-payment. As a result, our credit score is down and we’re still paying back for the trip,” she rues. “I wouldn’t recommend opting for travelling through BNPL unless one has that kind of money handy… else you’ll run into a debt trap that may severely impact future credit prospects.”

The BNPL market in India is one of the fastest growing in the world, suggests a report by data analytics firm Experian. It says BNPL transactions in India surged by 21 percent in H1 2022—3 percent more than the global growth. BNPL payments in the country are expected to grow by 71.5 percent on an annual basis to reach $12,355.8 million in 2022.

The phasing out of pandemic restrictions and increasing consumerism amidst an inflated economy have led to an exponential growth of the BNPL model, especially among those aged 25-35. The lack of online payment friction, aggressive marketing techniques, personalised recommendations, and the ease and convenience of shopping online are all fine-tuned to increase sales and, in turn, the adoption of the BNPL model.

Due to the mass adoption of BNPL in India, an increasing number of travel aggregators are aggressively pushing for TNPL packages where expensive trips are positioned at an upfront payment of a few thousand. “The idea of travel now pay later encourages people to enjoy the experience of travelling without hesitation. This can lead to impulsive purchasing, resulting in impulsive spending,” says Yashoraj Tyagi, CTO, and CBO of CASHe, an instant loan provider that offers instant credit of up to Rs60,000. “While using TNPL services, the notion that you won't be paying immediately could lead consumers to spend more than they intend to. It's essential to keep an eye on your finances to prevent overspending,” he adds.

The BNPL/TNPL model follows a strict repayment schedule with high interest rates and processing costs which can go up to 20 to 25 percent if payment is not made on time.

“Not only can paying your bills late result in additional fees, but it can also hurt one’s credit score,” Tyagi points out. “Failing to pay your bills on time hurts your credit score as it implies that you are unable to repay your debts. One needs to be mindful of this and make sure they pay their dues on time.”

Despite the concerns, the TNPL market is expanding exponentially. “The BNPL/TNPL industry is expected to surge over tenfold within five years as millions of online shoppers get lured by interest-free credit with fewer hassles. This offers us an enormous opportunity to grow and integrate our payment method with other players in the travel, leisure, and hospitality business,” says Tyagi.

CASHe recently tied up with IRCTC to offer TNPL services for railway bookings. “We foresee it to be one of our fastest revenue drivers because there has been a 3x growth in TNPL transactions since the integration with IRCTC,” he adds.

To buy or not to buy?

“It is not a viable investment for those who can’t afford the kind of expenses that come with these options. People tend to overspend which can ruin their personal finances,” says Sushant Bindal, founder of Money Monitors, a consumer financial education platform. “BNPL makes people believe in something that they can’t afford.”

“BNPL or TNPL loans can help you prove your creditworthiness to the credit bureaus quickly, and help you build up a solid credit score without having to jump through the hoops of acquiring a credit card. However, that seldom happens because a large volume of these BNPL loans come from impulse buys and not planned purchases,” says Bose.

“When you pile up BNPL loans from a string of impulse buys without giving a serious thought to your ability to repay them on time, your credit score could get greatly compromised and, in turn, impact your access to liquidity when you really need it,” adds Bose. “For this reason, we advise a very high degree of caution to our investors while taking up a BNPL loan.”

Bose suggests that consumers should ideally keep a close eye on their personal finance ratio. “One should never let their total monthly debt exceed more than 20-25 percent of their net in-hand income,” he says. “In today’s world of social media-fuelled instant gratification, saving in advance for a future goal may sound quaint; but it’s the only real way to keep credit and financial stress in check.”

The BNPL and TNPL market is set to grow multi-fold, but how can it be best managed? “From a consumer perspective, it could be a wise investment if planned according to one’s financial ability. From the service provider’s perspective, a checkpoint needs to be created to screen who can avail of a particular service, something which lacks at the moment. A preliminary screening can also be done. It will help bring down the default rate and be beneficial for the long-term financial health of the companies,” says Bindal of Money Monitors.