The meltdown is just a bump in the road, according to experts. There's plenty of capital available in the system for early-stage startups and the funding indicates investors' long-term bullishness 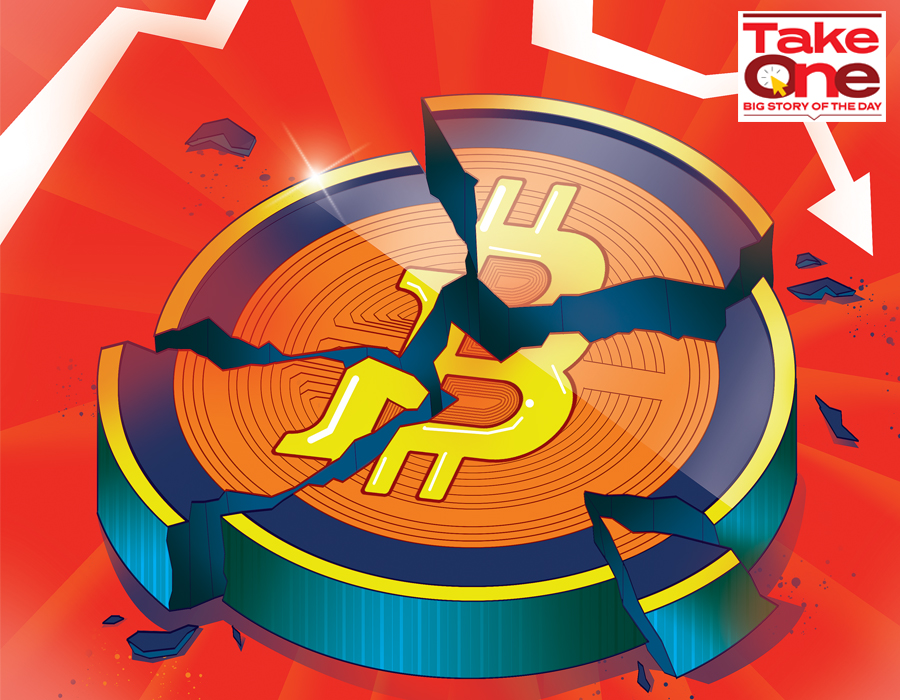 Bitcoin apart, all cryptocurrencies, including ether, matic, cardano and dogecoin, have shed 50 to 90 percent of their value since late last year Illustration: Chaitanya Dinesh Surpur

As the price of bitcoin, the world’s most actively traded cryptocurrency, fell to $17,628 over the weekend—its lowest since November 2021—it sent the markets into a tizzy. Bitcoin apart, all cryptocurrencies, including ether, matic, cardano and dogecoin, have shed 50 to 90 percent of their value since late last year. So much so that the market value of all traded cryptocurrencies has tumbled from a peak $3.2 trillion last November to below $1 trillion.

But despite the broad sell-off in digital assets, crypto and Web3 startups in India are still attracting funding.

Consider this: Crypto and Web3 startups have already—in the six months of 2022—raised more than $1 billion in funding across 43 deals. In 2021, by comparison, the space attracted $536 million across 39 deals, according to data provider Venture Intelligence. Top deals include Polygon’s $450 million fund raise by SoftBank, Tiger Global and Sequoia India in February, cryptocurrency exchange CoinDCX’s $136 million fund raise in April and treasury management platform Coinshift’s $15 million fund raise in May, even as TerraUSD, the so-called stable coin which promised to match the value of the US dollar, collapsed, wiping out investors of more than $40 billion.

A handful of early-stage startups have also attracted funding of late. Zeeve, a Web3 equivalent of what Amazon’s AWS is to present day companies, raised $2.65 million in seed funding from Leo Capital and Blu Ventures, US-based General Catalyst led a $2.5 million round in Stan, its first in what it says will be many Web3.0 bets in India, and Nume Crypto, a Web3 payments startup, raised $2 million from Sequoia India in June.

Moreover, while some startups like Hyderabad-based Vauld, a cryptocurrency exchange backed by Coinbase Ventures, have laid off staff—in this case 30 percent of their headcount or roughly 30 to 35 people—most others are hiring. WaxirX and CoinDCX, two of the largest crypto exchanges in India have said that they will continue hiring people despite seeing a drop in trading volumes given the turmoil in the broader market as well as India’s 30 percent tax levy on cryptocurrency trading and other regulatory challenges. “We are hiring and on track with our plan to become a 1,000-employee organisation by the end of the year [from 500 at present]. This is the time to build,” says Sumit Gupta, co-founder and CEO of CoinDCX.

Also read: Crypto will not be hit as hard as other startup sectors: Sumit Gupta

So what is driving VC faith in the space despite the tumult in the market?

First, there’s plenty of capital available in the system for early-stage startups. The liquidity crunch is largely affecting later stage startups, whereas most Web3 companies are still early in their journey, explains Sanjay Mehta, founder and partner at 100X.VC and a long-time crypto investor. “It is unreal how much capital has been raised by funds for Web3 deployment globally, and in India,” he says. Silicon Valley’s Andreessen Horowitz announced a new $4.5 billion fund in May for backing crypto and blockchain companies, in addition to a separate $600 million gaming fund. Bessemer Venture Partners, the US-based VC firm that has invested in Indian startups like PharmEasy, Swiggy and BigBasket, launched a $250 million fund dedicated to crypto and Web3. New York-based venture firm Union Square Ventures announced $625 million funding for “both Web2 and Web3” companies in April. Earlier in June, Binance—the world’s largest crypto exchange by trading volume—raised $500 million to invest in Web3 technologies. Dragonfly Capital, a San Francisco-based, crypto-focussed investment firm, closed its third fund with $650 million in capital in April. 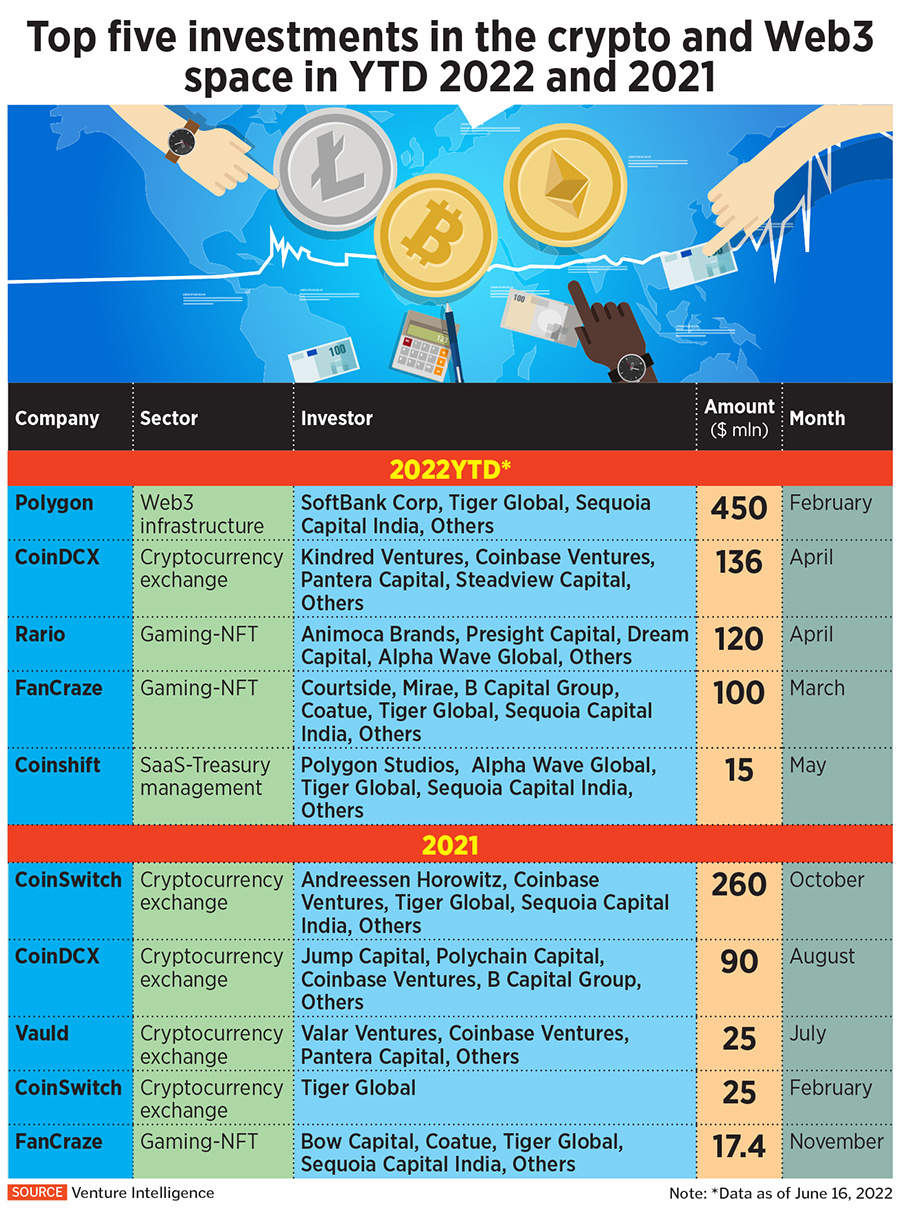 Closer home, Sequoia India recently announced the launch of a $2 billion early stage, venture and growth fund for India. While the funds aren't particularly set out for crypto and Web 3 startups alone, the VC firm has highlighted its interest in the “thriving” Web3 ecosystem. Since the second half of 2021, it has made around 20 investments in the Web3 space in India. In May, CoinDCX’s venture arm announced that it will invest Rs100 crore ($12.9 million) in early stage crypto and Web3 companies over the next 12 months; 30 to 40 percent of the funds will be allocated to Indian startups.

“This is the best time to find companies building for the long term,” says CoinDCX’s Gupta. Even Coinbase—which cut 18 percent of its staff globally with around 25 to 30 people in India—has a venture capital (VC) arm that has thus far invested $150 million in Indian crypto and Web3 startups.

So, “there is enough and more dry powder for early stage crypto companies building unique products”, as Mehta puts it.

Second, Web3 is where the exciting prospects lie at present. “The crash is not just in the crypto market, it is in the overall market. So what other opportunities exist for investors?” asks Ravi Chamria, co-founder and CEO of Zeeve, the recently funded startup that helps enterprises and startups deploy blockchain nodes and host decentralised apps on its cloud infrastructure. “I don’t see any major opportunities,” he continues. “B2B tech SaaS, yes—it’s doing well; fintech, previously attracted a lot of funding over the last seven to eight years, but it has become quite saturated—newer fintechs are getting less funding now. So Web3 seems to be a safer bet. And this crash will last another six to 12 months at the most.” 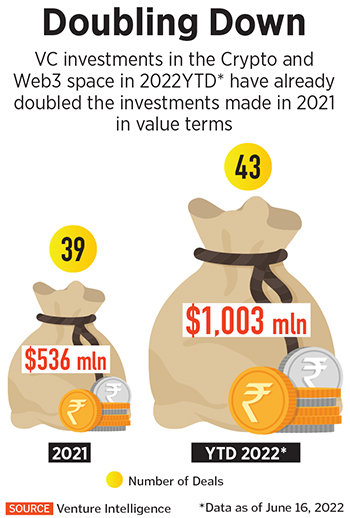 However, within the Web3 space, VCs are being “choosy and selective” about where they’re deploying their monies. Startups in the infra space, which could include launching a blockchain protocol like Polygon, or cloud and automation services startups like Zeeve, analytics players etc are getting heightened interest from VCs, says Chamria. However, NFT marketplaces and Metaverse-based startups are seeing a slowdown in investment. “Infra players don’t see much excitement during bullish times and neither do they see much discouragement during bearish times,” he says.

Third, India’s underlying fundamentals are strong. The country has more than 20,000 active crypto and Web3 developers, according to some estimates. “That’s out of a total of 4.2 million Indian developers who are capable of adopting crypto,” points out Mehta. “What this means is that India has the talent to build the next generation of Web3 companies. That’s what gives VCs the conviction to bet on the space,” he says.

Adds Gupta, “I believe India is going to become the next Silicon Valley for Web3.” The reason, he explains, is because this industry is completely built on technology and India is the base of technology given its large number of developers. “Ultimately what you need as a strength is high quality developers who can build on top of these blockchains to drive adoption. Moreover, the rate at which Web2 developers are shifting to Web3 and building solutions gives me the confidence that India is going to become a hub for crypto and Web3 in the years to come.” Mehta concurs: “India has both the talent and the money to be number one in the Web3 space.”

Tweets by @forbesindia
The effect of China's tech crackdown
Photo of the day: Pose with pride