How MakeMyTrip is clawing back ground lost during the pandemic

India's oldest online travel aggregator (OTA) worked on a war footing to conserve cash and devised a two-track strategy to get back on track, even though business was down 95% in the first quarter

Like a seasoned pilot informing passengers about the weather conditions once the seat belt signs go off, Deep Kalra, too, proclaimed in December 2018 that MakeMyTrip (MMT) would most likely break even in FY20. The impressive reassurance by the founder of India’s biggest online travel aggregator (OTA) was crucial, given the poor track record of the Nasdaq-listed firm regarding its bottom line: Except for fiscal years 2011 and 2012, MMT had consistently posted operating losses. To be fair to Kalra, MMT was firmly on track to keep its commitment. A year later, in the third quarter of FY20 (October-December 2019), the company crossed the $200 million milestone in quarterly adjusted revenue with $206.7 million. The interesting part, though, was a massive dip in adjusted operating losses: About $11 million as against $22.2 million during the same quarter a year ago, and $19.3 million in Q2 of FY20. In fact, the adjusting cash losses were down to about $6.2 million, claimed Mohit Kabra, group chief financial officer at MMT, in an earnings call. It seemed the prolonged rough patch was set to get over. The following quarter—Q4 FY20—too started on a promising note. “January and February were pretty much breakeven months,” Kabra said in the subsequent earnings call. Then came the pandemic. “The impact of Covid was very sharp in March,” he says, adding that the company still managed to keep quarterly cash losses at about $5.5 million. 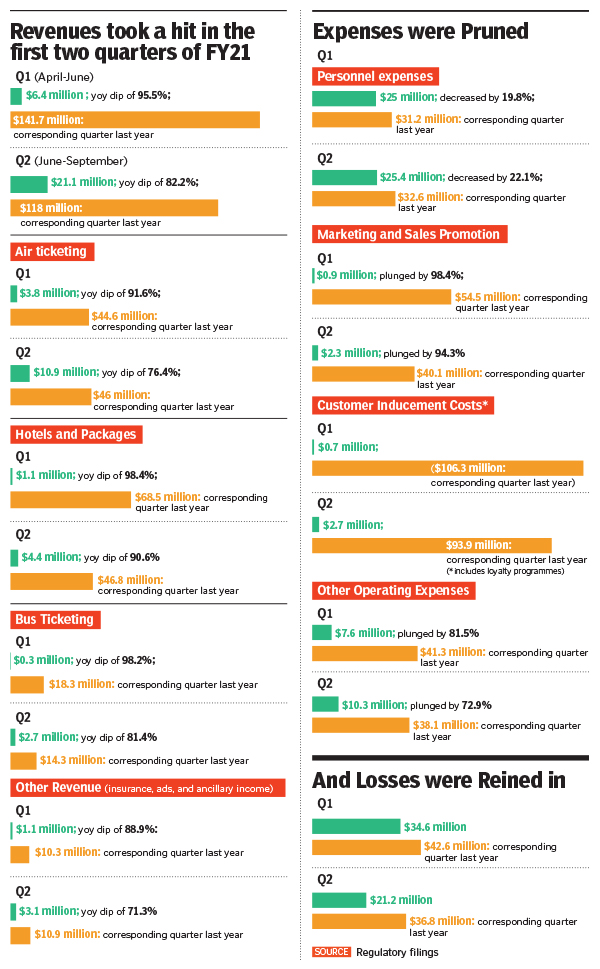 The pandemic turbulence, though, was set to get worse as the country went into a prolonged lockdown. The route-to-profit plan got tripped. Revenues vanished and losses piled up. In a letter addressed to employees in March, Kalra painted a realistic picture. “These are incredibly tough times,” he wrote. “We need to navigate through together.” But the storm only got intense as, in the first quarter (April-June) of FY21, year-on-year revenues dipped by a staggering 95.5 percent. The free fall continued in the following quarter with revenues slumping by 82.2 percent year on year. Cut to November 2020. Now, it is the turn of the battle-scarred co-pilot—Rajesh Magow, also the co-founder and group chief executive—to look at the silver lining. There are many, but the biggest is this: An excellent track record in survival. 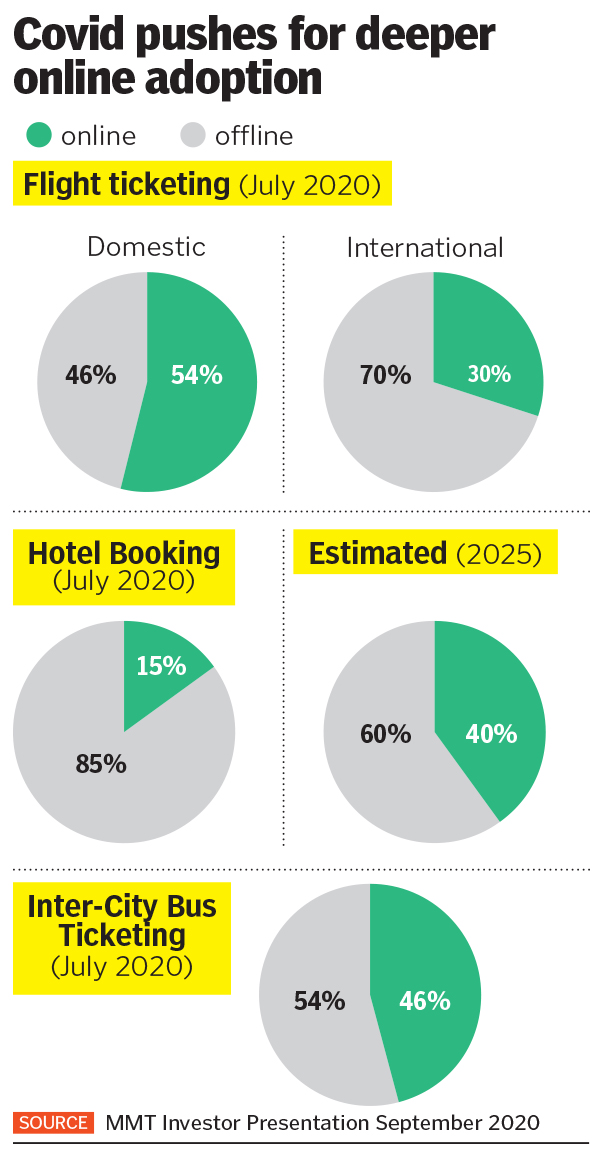 From the dotcom bust at the turn of the century, the 9/11 attacks and the SARS epidemic of 2003 to the global financial crisis of 2008-09 and Indian aviation blues in 2012 and 2019 with the grounding of Kingfisher Airlines and Jet Airways, respectively, MMT has seen it all—and lived to tell the tale. “We didn’t walk into this crisis completely blind,” he says. “We were down by around 95 percent in the first quarter. Who would have imagined this?” The magnitude, he lets on, was unparalleled. Magow now shifts attention to the immediate and second biggest positive over the last two quarters: Sequential growth in revenue, from $6.4 million in Q1 to $21.1 million in Q2. In terms of adjusted margin—which includes the cost of carrying inventory—revenue increased from $6.8 million to $23.1 million. The interesting part, again, is the way losses have been contained during the same period: From $34.6 million to $21.1 million. While 40 percent of the hotel booking business is back for MMT, so is 50 percent of the flight and inter-state travel business. Magow claims revenge tourism is behind the spurt. “We are seeing clear signs of it,” he says. People, he adds, were sick and tired of being confined to their homes during the protracted lockdown. From staycations (short stays), weekend gateways, workation (working from hills) to making trips to Goa, Dubai and Maldives, Indians have hit the road, and boarded the flight to get over pandemic fatigue. Weekend getaways at premium hotels, resort-style properties and premium villas—many within driving distances of metros—mean premium properties are seeing a better rebound than budget ones. Globally, too, leisure travel has seen an uptick, just like it did during the 2008 financial crisis when leisure was the first segment to recover, as highlighted by a Skift Research report in partnership with McKinsey. Titled ‘The Travel Industry Turned Upside Down’, the report released in September underlined that, in 2009, Marriott saw the return of weekend occupancy rates far outpacing weekday occupancies. “This trend is likely to recur this time around,” the report says. 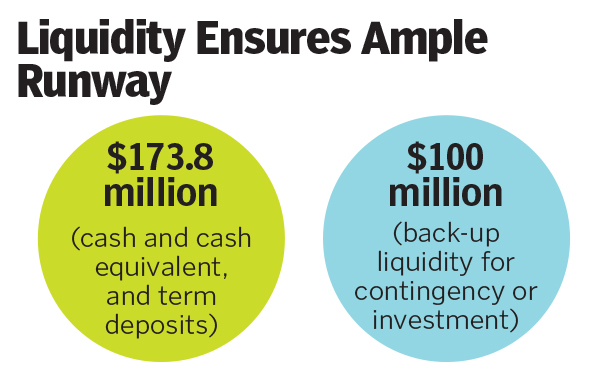 Back home, though the green shoots are clearly visible, they might not be enough to help any online travel aggregator (OTA) or hospitality player survive the unprecedented crisis. What definitely would be of immense help, Magow adds, is the amount of cash a company has on its balance sheet, or can manage to get. When revenues dip sharply, the only safety cushion is cash. “Everybody would need cash to manage this crisis,” he says. Thankfully, he lets on, MMT is safe on that front. At the end of the second quarter, the company had $197.7 million in cash, cash equivalent, and term deposits. There’s another $100 million as back-up liquidity for contingency or investment. This gives MMT enough runway for the next few quarters. MMT also worked on a war-footing to conserve cash. “We went back to the drawing board and started thinking what next,” says Magow, adding that the company drafted a two-track strategy. The first, he says, was survival. The company was down 95 percent, so variable and semi-variable costs were to be attacked urgently. A comprehensive review of cost structures was undertaken, salary cuts were rolled out, and marketing and promotion costs were slashed. The company shifted its focus on automating as many potential post-sales queries as possible, and ‘right-sized’ headcount, largely in the packages business, by shifting to variable cost-driven offline sales channels. Pre-Covid, MMT started increasing its franchisee store footprint, and signed about 150 centres. This allowed it to shut all its company-owned offline retail stores across the country during the crisis. While the trend of optimising cost and minimising losses continued to play out during the second quarter, one more shift was clearly visible: The business revival would be led by the domestic market, as international travel was still restricted, taking a toll on the airlines. Two-thirds of the world’s aircraft fleet, Skift Research underlines, has been parked. While 18 airlines have filed for bankruptcy, the global airlines industry is estimated to lose $315 billion in passenger revenue in 2020. Airlines, the report adds, lost approximately $60 billion of cash in just the second quarter of 2020, compared with a full-year operating profit of $44 billion in all of 2019. Hotel demand, too, may not reach pre-Covid levels until 2023, says the report. Back home, for MMT, the pandemic has brought in its wake an underlying tailwind: A quicker shift to the online medium. An investor presentation by MMT in September gives a glimpse into the immense headroom for growth. Online flight booking for domestic and international travel was at 54 percent and 30 percent, respectively, in July. In contrast, online hotel booking stood at 15 percent, and is estimated to touch 40 percent over the next five years. For inter-city bus ticketing, online booking component was 46 percent. “Clearly, offline to online momentum will gather steam,” says Magow. What’s also perceptible is low competitive intensity, which means less of cash burn. It’s not only MMT that has been seeing distinct uptick in travel, and business. Globally too there has been a rebound. China, for instance, is getting close to recovery for domestic travel on the back of ‘revenge travel’. Optimism around a return to normalcy improved over the summer, the Skift Research points out, adding that 74 percent of respondents said it would take less than three months for their lives to return to normal. “By August, hotel room nights and domestic air capacity were both close to pre-Covid-19 levels,” it says. In other geographies, too, there are signs of latent demand for travel. Europe, led by Germany, shows encouraging first signs of travel demand recovery, the report maintains. In the US too, where virus continues to spread, there are a considerable amount of searches and advance bookings. 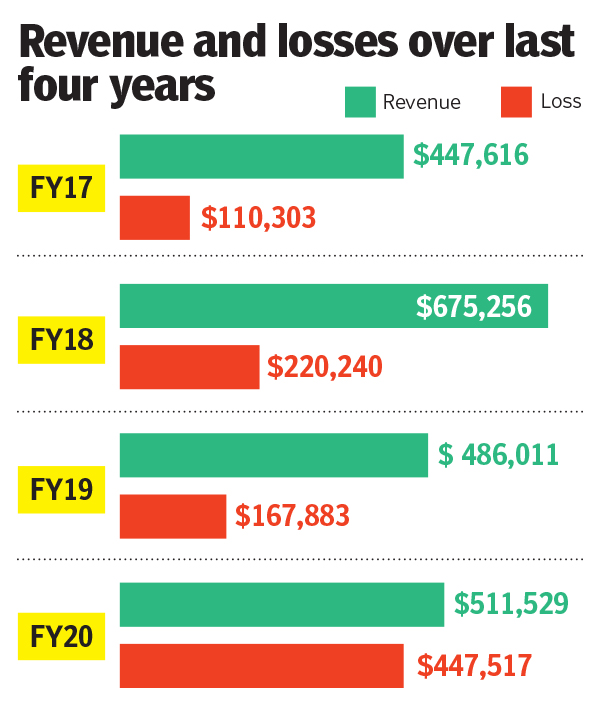 Though the pandemic shows no signs of abating, and Europe facing a second wave with lockdowns, there is hope for OTAs. Online travel, Skift Research notes, has lived through two past recessions—the tech-bubble crash and the global financial crisis. In fact, Expedia Group and Booking Holdings increased their combined worldwide gross bookings from $25 billion pre-crisis to $31 billion by 2009, the report underlines. Another big positive for OTAs are high variable cost structures such as sales and marketing expenses. When Expedia Group, underlines Skift Research, saw its Q2 2020 revenues fall by 82 percent year-on-year, it was able to respond with an identical 82 percent cut in sales and marketing. At Booking Holdings, too, revenues fell 84 percent, so it cut sales and marketing costs by 79 percent, the report pointed out. Back home, MMT, too, has slashed this component generously. For Q2, marketing and sales promotion stood at $2.3 million, a 94.3 percent cut from $40.1 million during the same quarter last year. A cut in expenses, along with revenge travel, is driving the slow revival for MMT. The fruits of revenge travel, though, might not turn out to be so sweet if Indians continue to stay reckless and the pandemic surges on. Magow is keeping his fingers crossed. “If things don’t turn worse from where we are today, I am quite hopeful for the next quarter summer season,” he says. At least in the domestic market, recovery from April-June onwards should be close to 75-80 percent, he adds. Kalra is betting big on a successful vaccine. The days of carefree, leisure, discretionary travel could gradually return once the virus is adequately controlled or an effective treatment or vaccine is developed, he said in an earnings call in June. “But we have a long climb ahead,” he added. It’s been a long, strange trip for MMT, but the good news is that the journey is still well and truly on.