The conglomerate has acquired 11 companies and raised $250 million over the last year. Now with its move into the international market, a revamped organisation structure and a potential deal with Raymond's consumer care portfolio, can it sustain in the long run? 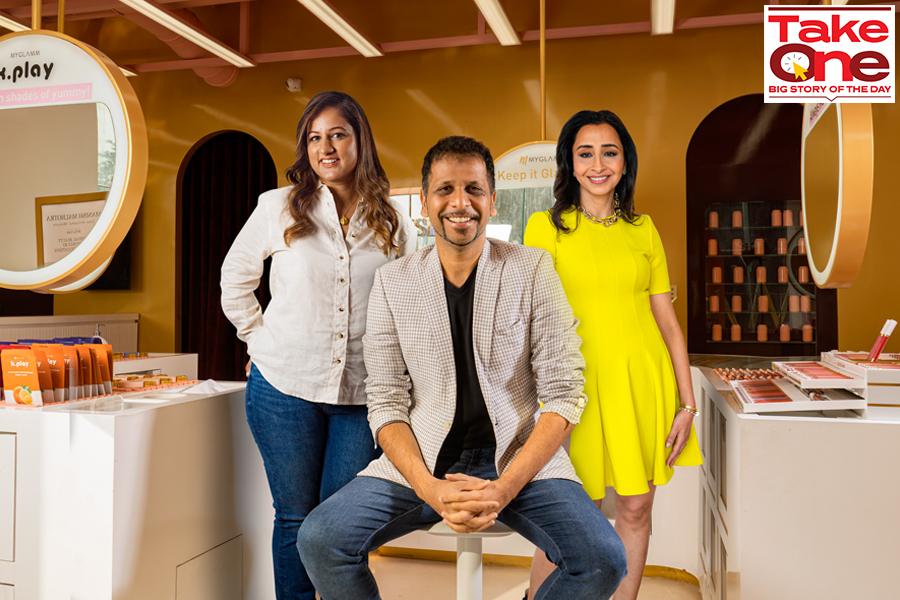 Over the last year, The Good Glamm Group has been on an acquisition spree with 11 acquisitions. On July 6, the content-to-commerce conglomerate announced the launch of its international division and overall group structure to build revenue synergies from all its acquisitions.

The group has now been divided into three core segments—Good Brands Co, comprising all its DTC beauty and personal care brands; Good Media Co, which will look at all its digital media brands and influencer platform Good Creator Co. “We are consolidating the overall structure of the group to reflect our content-creator-commerce strategy. The core functions are being integrated between companies in each division which has led to efficiencies and removes duplication,” says Priyanka Gill, co-Founder, The Good Glamm Group.

Each of these verticals have their own metrics and very different objectives—but are interconnected in their way of functioning. Good Brands Co is the revenue driver, with a focus on acquiring more customers and generating revenue in a cost-effective way; Good Media Co will focus on digital reach and engagement and Good Creator Co will help influencers make money, of which the company takes a commission.

The second major announcement of setting up an international division for Good Brands Co—which will be led by Asad Raza Khan, global commercial officer—was always part of the core team’s long-term vision. “The international division gives Good Brands Co an opportunity for global growth. We aspire to build our brands across offline channels, e-marketplaces, and DTC via leveraging the growth and digital marketing capabilities of the group already in place,” says Khan.

The group is also in talks with the Raymond Group for an acquisition of its consumer care portfolio—Park Avenue and Kamasutra, stated a source with information on this deal. If this deal closes, it will be The Good Glamm Group’s entry into the grooming and sexual wellness segment. The deal has been in talks for a while, it is being renegotiated, and as per the current market situation Good Glamm is looking at a deal size of Rs 2,000 crore for the acquisition. 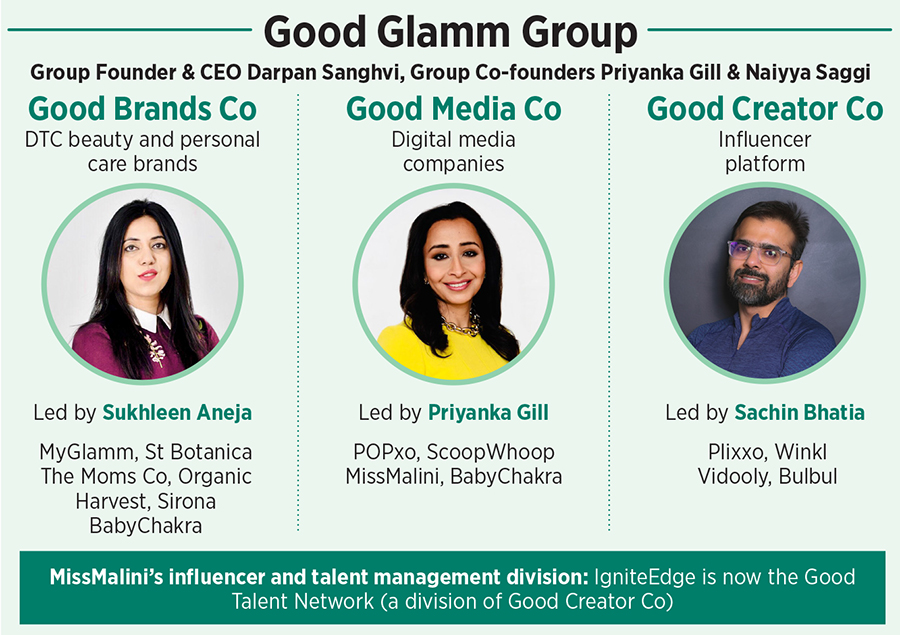 In October 2017, Darpan Sanghvi launched direct-to-consumer (DTC) beauty brand MyGlamm. Most brands at the time were big on selling on marketplaces such as Amazon or Nykaa. However, Sanghvi believed, “We always wanted to be truly DTC and not just digitally enabled. We believed that to own the customer, the transaction needs to happen on our own platform.”

In having a customer transact directly on the platform, Sanghvi claims they understand the customer better and create products that are relevant for them. “This strategy worked super well for us, our repeats were fantastic and customers were loving our product,” he says.

But the biggest challenge with being a DTC brand is its customer acquisition cost (CAC). Towards the end of 2019, the company was spending about $15 (over Rs 1,000) to acquire a customer to transact on their website. “Around the same time, our revenue run rate was Rs 100 crore. We were spending about $0.5 million to acquire 30,000 customers a month. That’s when we realised it was time to solve the CAC problem,” recalls Sanghvi. In an attempt to find a solution, Sanghvi turned to the content-to-commerce model.

Gill, founder and CEO of POPxo and Plixxo, was looking at commerce for her brands. In 2013, she started POPxo as a content platform for women in India, followed by influencer marketing platform Plixxo. “At POPxo, our aim was to get a lot of users on our platform and make money. While we did get a lot of users to the website and engage with us, making money was where we struggled,” she explains.

POPxo started experimenting with commerce, only to realise their DNA was content. Around the same time, the pandemic hit and their funding round fell through. Sanghvi had reached out to Gill to expand in the content vertical, while she was looking at commerce. That’s when the idea clicked: Building a content-to-commerce conglomerate. In August 2020, MyGlamm acquired POPxo and Plixxo.

A year later, parenting platform and community BabyChakra was also acquired by MyGlamm. “We had a community of 20 million parents, a base of 10,000 doctors interacting with parents on childcare, pregnancy etc. A lot of brands were launching their products on the platform. We decided to build a range of BabyChakra brands too—a few experiments in 2020 became bestsellers,” says Naiyya Saggi, founder and CEO, BabyChakra. After the launch of the initial few products, the team realised commerce wasn’t in their DNA, and scaling up was becoming a challenge. In August 2021, the company was acquired for Rs 100 crore by MyGlamm.

Most things—from beauty to FMCG products—are discovered by customers on social media. “Content creators are enabling consumers in discovering brands and products. That’s what is helping businesses scale so quickly. This is what led us to believe in the concept of content-to-commerce, and we wanted to have an end-to-end presence across the ecosystem.” Another aspect that gave them confidence in this unique model was the fact that last year they raised close to $250 million and before that only $30 million.

With the coming together of these three companies, the trio decided to turn the company into a large group or as they call it a “global digital beauty conglomerate”. That was the beginning of forming a house of brands: The Good Glamm Group.

But was creating a house of brands always Sanghvi’s vision? When he launched MyGlamm, two weeks into the launch, he says, “I signed Manish Malhotra to create a premium sub-brand with MyGlamm. Within a year of the launch, I already had three brands—LIT by MyGlamm, Manish Malhotra by MyGlamm and MyGlamm.” According to him, with a single brand in a single category one can’t build scale. He adds, “The most you can scale it is Rs 1,000 crore, if you want a company that’s doing Rs 8,000 or Rs 10,000 crore in revenue, it has to be multiple brands across multiple categories.”

As the group grew, the strategy for the business, Gill says, “was increasing our top of the funnel user reach." In 2021, the Group completed $270 million worth of acquisitions towards all the companies that comprise The Good Glamm Group today. This $270 million was financed by a $100 million from its Series C and the balance was paid in stock. Post these acquisitions, $150 million was raised in the Series D at the end of 2021. This capital is for the growth of the acquired group companies, all the way to the IPO.
Across the three segments, the company looked at gaps and acquired based on the largest player in that particular market. For instance, on the brands side the team looked at conversations happening on content platforms—which generates 4.5 billion monthly impressions.

“Good total addressable market (TAM), e-commerce penetration growing and conversations happening meant that it was a category we were interested in looking at. We would then look for the best brands in those segments to acquire.” Within the brands segment, that’s how they acquired companies such as Moms Co, St Botanica and Organic Harvest. Another parameter that the group looks at when acquiring a brand, says Saggi: “We look for founders who have similar vision, are brand obsessed and have extremely strong product market fit and customer obsession and are culturally a good fit into our existing ecosystem.”“When evaluating acquisitions, the most important thing to focus on is synergy. And when integrating acquisitions, the most important thing to focus on is people,” says Andre Hoffman, CEO, L’Occitane, an investor in the group. He adds, “I really think Good Glamm has cracked the code on integrations with a healthy mix of decentralisation and centralisation, and we can already see integrated companies growing 3x in revenues in six months.”

Companies that have been acquired have not only made the most of its online presence but also offline, with its 50,000 POS across India. In the case of Moms Co, the startup was looking to expand the brand beyond marketplaces. But they could forsee significant challenges, including the increasing cost of Facebook, Amazon, the Google ecosystem etc. That’s when the content-to-commerce play drove them towards Good Glamm Group.

“On the brand’s growth, we were already present at 5,000 stores and, by the end of this year, we will be present at 25,000 stores. Our DTC website is already 3X of what we were pre-acquisition and that continues to grow at a very fast pace,” says Malika Sadani, founder and CEO, The Moms Co, which was acquired by the Group in October 2021.

Malini Agarwal, founder and CEO, MissMalini Entertainment, adds, “There was a vision to build the biggest influencer and creator ecosystem in India, which would also, of course, drive commerce, and that fell perfectly into our goals and aspirations of MissMalini to scale our brand to the next level.”

The company was acquired in December 2021, and currently has verticals that are part of both Good Media Co and Good Creator Co. So far, the company has acquired 11 brands, but they have plans to acquire a few more. “With most of the Series D fundraising capital still in the bank, we have set ourselves an ambitious revenue run rate target of $400 million by March 2023 for the current organic business with a clear mandate to be profitable,” says Sanghvi.
What next? Though an IPO is the end-goal for the company, they have a long way to go. The company’s revenue from operations for FY21 was Rs 49.32 crore, as compared to Rs 43.95 crore in FY20—only a 12.2 percent growth.

Sanghvi, now the Group founder & CEO, explains the business, “While the beauty business [majority revenue generator for the company] has high gross margins, the challenge is the marketing costs. And we have successfully brought this cost down with our content-to-commerce strategy.” In FY21 its total expenditure was Rs 91.2 crore, down from FY20’s Rs 110.3 crore. The company has an ambitious goal to reach $1 billion in gross revenue around October-November 2023. Adds Sanghvi, “We need to hit this goal and turn cash positive before we go for an IPO. But it is definitely the next big thing for us.”