An App For Everything

For the first time now, Indian engineers have a big marketplace for developing and selling apps 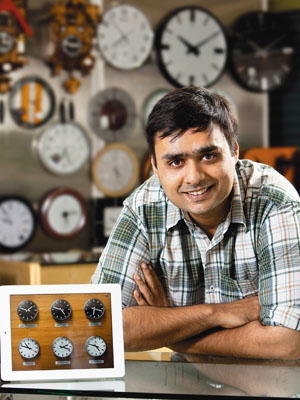 Rohit Singal can’t contain his surprise. He owns a software development outfit in Bangalore and was recently paid a visit by Swami Sachidananda’s followers. Swamiji has a healing technique that mixes music and meditation to cure depression and even cancer. The music is available on CDs but he finds it impossible to ‘yoke’ everyone to the same music without playing it on a public address system. So the followers wanted Singal to develop an app that would take Swamiji’s music each time he played a melody on his keyboard and stream it to all the iPods, iPads and iPhones that disciples in the Ashram are carrying. Singal says in his thick Haryanvi accent, “When I started in 2006 there were hardly any Apple devices. It is amazing how quickly these devices are all around.”

Singal, 35, runs one of the hottest mobile software design and development companies. He started Sourcebits in a tiny garage outside M.S. Ramaiah Institute of Technology in Bangalore. Today it occupies 46,000 sq. ft. in Electronic City, a major tech hub in Bangalore. He has designed more than 250 apps for all platforms — Apple, Android, BlackBerry. The company’s flagship product, Night Stand, an app that converts an iPhone into an alarm clock, alone has been downloaded more than 5 million times and earned close to $1 million. His clients include MIT Sloan, General Electric and Procter & Gamble.

For the year ending March 2011, Sourcebits posted revenues of $6.5 million. As people around the world take a shine to the tablet, Singal and other app developers like Trellisys are being kept busy. Singal gets at least 10 unsolicited emails a day from clients wanting to work with him. Currently he is in the middle of closing a financing deal with one of the largest VCs in the world. Sourcebits employs about 250 developers and last month made 100 job offers to engineers passing out of campuses of IIT and BITS Pilani.

This is also a huge step towards democratisation of software development. Sure, the movement began with open source development, but the tablet is taking it mainstream. That’s helping Indian engineers who have been writing software code for the last 40 years. Till now, it was for banks and manufacturing plants. Now, thanks to new platforms like Android and Apple and changing consumer behaviour, they have a marketplace for developing and selling apps. They don’t have to spend millions of dollars in sales and marketing or even in research. Now anyone can create an app, upload it on, say, iTunes and sell it for as little as 90 cents. All it takes is some imagination, a few weeks of coding and the ability to quickly churn out ideas. 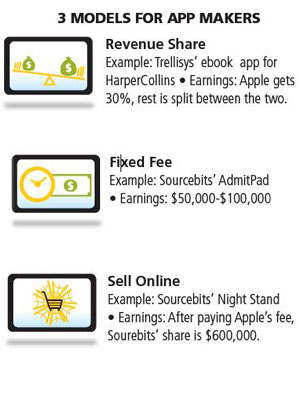 Two years ago Trellisys, a Bangalore-based Web-technology company, got a call from HarperCollins UK, which was looking for new models to sell its books. HarperCollins had a 20-year-old classic, SAS Survival Guide, and it wanted the book in an e-book format.

“The physical book is 450 pages long, no one is going to read that much on an iPhone,” says Rohit Regonakayk, CTO. So Trellisys selected the relevant portions, created a user-friendly interface and animated the content with cute images and videos. It worked. The book has been downloaded 150,000 times and has earned a million dollars in new revenue. Apple took 30 percent and the rest was split between HarperCollins and Trellisys.

Once an app hits the Top 100 on iTunes store, it can easily earn $100,000. But Singal admits that very often his ideas end up as duds. “Eight out of 10 times I am wrong, but that is the beauty of the products business. You just need one big idea,” he says. Just like Jobs showed with the iPad!
The Making Of A Disruptive Force

Microsoft, Intel, Apple, Google — they all saw the tablet coming. They’ve been trying to be one up

Tablets sit between PCs and mobile phones. But behind their success lies a bruising war to control the tablets’ format and specifications. On one side are PC stalwarts Intel and Microsoft; on the other, Apple, a computer maker for most of its past but since 2007, more a mobile player after the runaway success of the iPhone. Sitting in the middle — the Internet — is Google, seeking to create the software that would power these new devices. So far, the PC camp seems to be losing this battle. 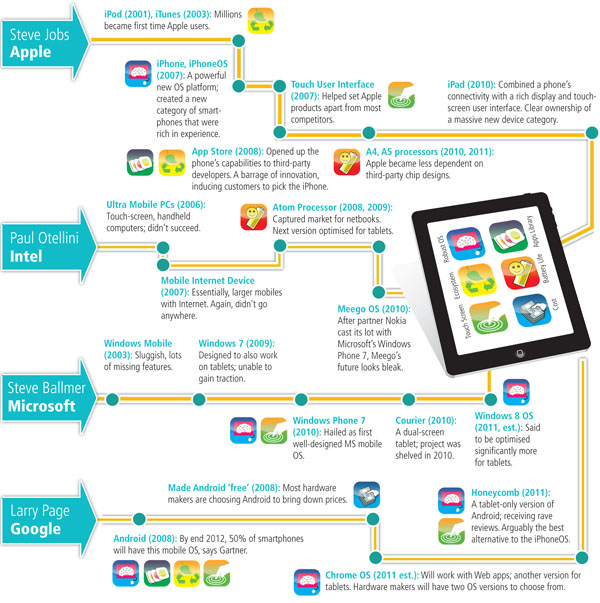 Tweets by @forbes_india
Confessions of Kishore Biyani, A Technophobe
Your Movie, Your Show