Renowned for his custom footwear for celebrities and as the creative director of Tumi, Los Angeles designer George Esquivel takes his success in stride 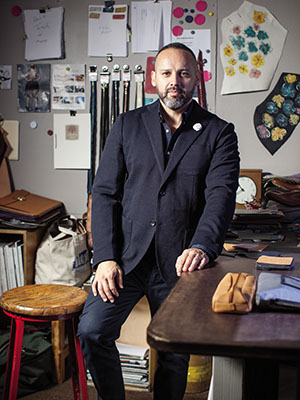 “Before the shoes, I was driving a truck, and before the truck, it was homelessness and living in motels,” says free-spirited California footwear-designer George Esquivel, whose talents are prized by clients like LeBron James and Brad Pitt, and who clocks thousands of miles on the road each year as creative director for Tumi.

“When you don’t have beauty in your life, you start looking for it, and if you don’t find it, you start inventing it,” he says, connecting the dots between the poverty of his youth and his $4,500 bespoke wingtips. “I couldn’t really dream, so I just worked hard until I could manage on my own.”

It’s an ethos that drives Esquivel’s happy band of cutters, dyers, tanners and skivers. His tidy Los Angeles workshop in an anonymous warehouse park abutting the Artesia Freeway produces some 4,000 pairs of shoes a year for prominent customers and boutiques such as Barneys in the US and Colette in Paris. But what stands out most—aside from the glorious aroma of tanned hides, or “the beef”, as Esquivel calls the colourful sheaths on his shelves—is the quiet. “There’s no clack-clack-clack of machines when everything’s done by hand,” he says.

Dressed in a navy button-down and inky-blue denim, the boyish Esquivel, 44, could pass as an adjunct history professor were it not for the sculptural wonders on his feet. Each shoe is fashioned from a single piece of Italian vachetta leather, worked more than 30 hours into an antique shade of umber, with charcoal wingtips handpainted on the finish. Even the pale fabric laces are cut in-house. It’s Victorian Americana for the Apple Watch set. “Perfection to me is completely uninspiring,” Esquivel says, showing off a vintage alligator valise Sylvester Stallone once gave him to make into loafers. The skins weren’t ideal to transform into shoes, but Esquivel keeps the bag as eye candy. “I love a gorgeous sports car, but I want age in the leather seats, you know? Same goes for my shoes. I want them to be perfectly flawed.”

That Esquivel is the artisan giving kick to style influencers such as Bruno Mars and Janelle Monáe (all those black-and-white saddle shoes scuttling through her ecstatic ‘Tightrope’ video are Esquivel’s) is testament to his resilience, his imagination and a rock ’n’ roll mindset that doesn’t care a fig about the status quo. He’ll hand-tool skull designs for hours onto the bottom of a sole (“A lawyer dude wanted them there without them being seen,” he says), and he recently developed a tanning process that brands faux-latticework patterns into leather by way of UV rays. “Whether you like my shoes or not, when you see them on the shelf, they’re going to draw your eye,” he says. 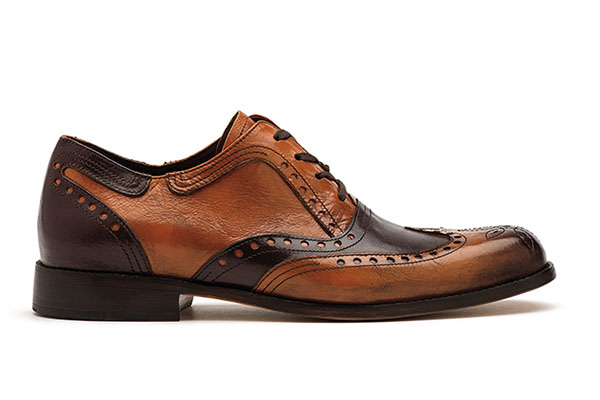 At 22, Esquivel was in Mexico with his girlfriend, Shelly (now his wife and the mother of their three children), when he spotted a sign that said BOOTMAKER. “I’d done a sketch that was a mosh of the Doc Martens and Creepers I thought looked so punk and rockabilly, and the guy made a pair for me.” Back home in LA, he canvassed shoe repair shops until he found someone who could teach him the skills to do it himself. A retired leatherworker who had once made clothes for Hollywood stuntmen let Esquivel shadow him in exchange for taking out trash and organising swatches. From the beginning, Esquivel’s shoes roused the curiosity of those in the Hollywood footlights. “Musicians I’d meet would see them and go, ‘What are those?’ and I’d make them a pair. The smaller bands would go on tour with the larger bands, and soon enough I was making shoes for No Doubt and Nine Inch Nails.”

The big time hit when Vogue named Esquivel a Fashion Fund finalist in 2009. That caught the attention of Tumi, where he’s now charged with making all products “more elevated, more beautiful, whatever that happens to mean to me”, he says. Inevitably, it means staying true to his instincts, even when they’re odd. “I might take a look inspired by an old firehouse, mix it with something out of an Egon Schiele painting and then somehow invoke James Dean,” he says. “The point is, my customers don’t like dressing like robots.”