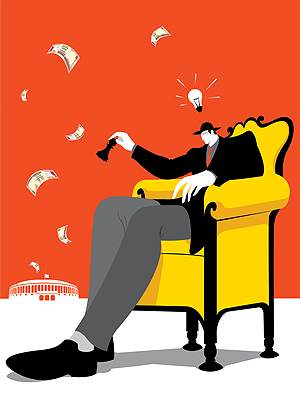 Corporations are social organisations, the theater in which men and women realise or fail to realise purposeful and productive lives.
Lester Bangs

The great corporations of this country were not founded by ordinary people. They were founded by people with extraordinary intelligence, ambition, and aggressiveness.
Daniel Patrick Moynihan

One of the reasons you study at great institutions or aspire to work in great corporations is that you hope to acquire the values they stand for.
Harsha Bhogle

If power lies more and more in the hands of corporations rather than governments, the most effective way to be political is not to cast one’s vote at the ballot box, but to do so at the supermarket or at a shareholders’ meeting. When provoked, corporations respond.
Noreena Hertz

More than half the world’s largest 100 economies are corporations. They have no loyalties to place or citizens.
Zac Goldsmith

Corporations are not in business to be social-welfare organisations; they are there to make money.
Benjamin Carson

With consumers having ever more choice, corporations must invest more and more in courting public opinion.
Franklin D Roosevelt

Tweets by @forbesindia
Pantaloons and Madura Fashion: Two stitches at a time
I hope to spend my birthday with you: Sahara chief