I hope to spend my birthday with you: Sahara chief

When Subrata Roy addressed thousands of employees virtually from Tihar jail on May 20, he promised an early return (by June) and a reversal in fortunes. His colleagues, in turn, were all praise for their chief. Here's a fly-on-the-wall account of the celebratory exchange 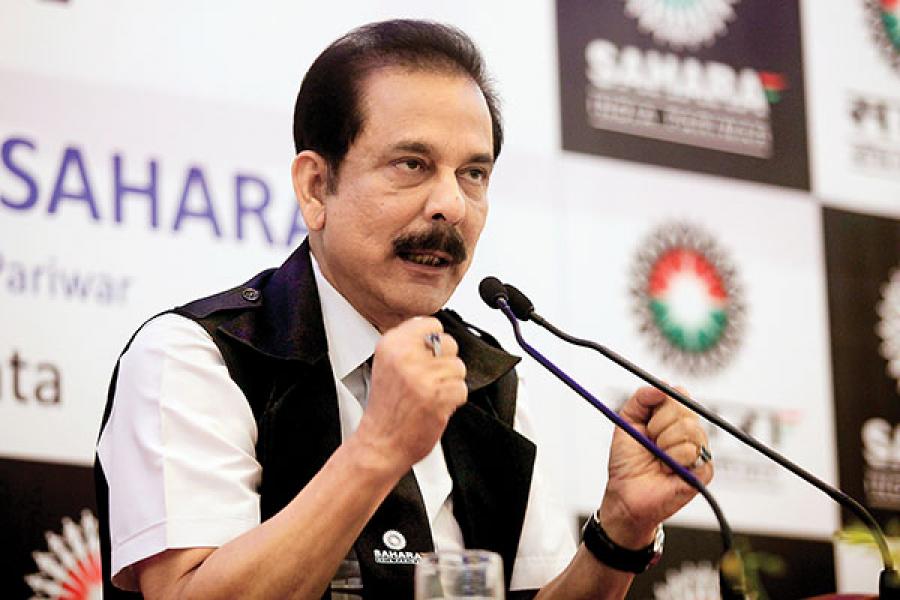 Sahara group chairman Subrata Roy’s run-in with regulators may have landed him a jail term that has now extended to 13 months, but for over a million employees of the group, ‘Saharasri’—as Roy is referred to by them—can, apparently, do no wrong.

Around 1,500 members of the ‘Sahara Parivaar’—the conglomerate refers to itself as a family—assembled at the Sahara Star hotel in Mumbai on May 20 for a virtual meeting with their managing worker and chairman. Roy, who is currently lodged in New Delhi’s Tihar jail, has been allowed the use of a conference room to conduct business operations and garner funds needed (around Rs 10,000 crore) to secure bail by divesting assets. He used that facility to connect with his employees across Mumbai, Aamby Valley and Delhi over a video conference. This was the first mass meeting that Roy has held with his colleagues in over a year.

At 4 pm sharp, Roy, dressed in his trademark white shirt, black waist coat and a black tie with the Sahara logo embossed on it, appeared on a giant screen put up in the banquet hall and greeted his employees with the customary gesture of “Sahara Pranam”. In response, his son and Sahara Group’s executive director Seemanto Roy held up a bouquet to the screen on which Roy’s image was projected.

What followed was a two-hour-long session during which Roy updated his colleagues about the latest developments about the court case, delivered a motivational speech and even issued some stern instructions.

The employees of the group showered words of devotion and praise on Roy. Some compared his jail time to Lord Ram’s exile from Ayodhya, while others said that without Roy they were like bodies without souls. One of the employees remembered how Roy treated him to lassi and samosas when he visited the latter in prison.

Roy, who appeared healthy, announced to his colleagues that the funds needed to secure his release had been arranged from foreign banks and the final process of getting counter-guarantees from Indian banks was underway. “I hope to rejoin you all soon and will hopefully get to spend my birthday (June 10) with you,” Roy, who will turn 67, told his audience to thunderous applause.

“I know all of you have gone through a lot of hardships, salaries have been delayed and this has led to problems. But my father used to say that without tasting the bitter, sweetness cannot be appreciated,” Roy said in Hindi. “The present hardships will make us strong and when the good days return, they will bring a lot of joy with them.”

Some employees expressed disappointment that lack of funds was preventing them from growing the business. To this, Roy remarked that, at present, the conglomerate’s hands were tied since all cash flows from the operations were being locked into the Sebi-Sahara account, as per a directive of the Supreme Court, and weren’t available for business. It was only a matter of time before things returned to normal, he added.

“I can tell you that the Sahara Group will grow at a far more rapid pace going forward than it has ever done in the past,” Roy said. According to the group’s website, Sahara has a total net worth of Rs 68,174 crore and a land bank of 36,371 acres. The conglomerate has varied interests including real estate, hospitality, financial services, infrastructure, media and sports.

Vivek Kumar, chief executive of Sahara Star and Aamby Valley, the group’s sprawling township near Lonavala in Maharashtra, voiced his concern over some employees’ lack of commitment to their work, and requested his boss to empower him to deal with them without the intervention of the headquarters in Lucknow. “I instruct and empower you to take strict action against such employees. The best interest of the organisation is supreme and whatever needs to be done for its benefit should be done,” Roy replied emphatically.

After accepting the good wishes of his employees, Roy closed the session by rising up to sing the national anthem. It was notable that while he made many promises about the future of his companies, he refrained from sharing any timelines. Significantly, his staff didn’t ask him for any either.