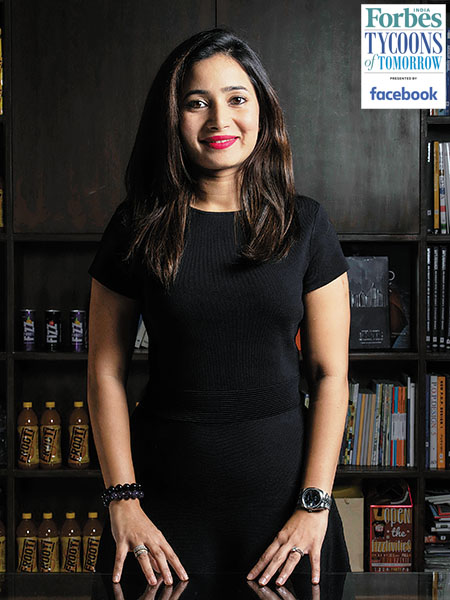 Nadia Chauhan has been taking Frooti and the company in new directions
Nadia Chauhan was at Parle Agro’s research and development facility in suburban Mumbai when the idea struck. It was 2016, and her children, aged seven and four at the time, were with her, frolicking with various beverage flavours to make concoctions of their own, as Nadia went about her work. Amid their experimentation, the children mixed Frooti—the company’s flagship beverage—with soda to create a fizzy mango drink. And lapped it up as excitedly as the bubbles that danced through the drink. Nadia knew just then what Parle Agro’s next roll-out would be: Frooti Fizz.

Cut to 2018, and the fizzy amalgam has become a hit. With brand ambassador Alia Bhatt adorning hoardings, purple bottle in hand, Frooti Fizz has been growing at a fast clip; prompting the Mumbai-based company that reported revenues of ₹1,604 crore in the fiscal year ended March 2017, to undertake a large-scale production capacity increase for next year.  Click here for the full Tycoons of Tomorrow list

“We aim to be No 1 in the mango drinks segment,” says Nadia. The 32-year-old backs up her bold words with action—a trait that has seen her catapult Parle Agro from a “small organisation” in 2003, when she formally joined her family’s ₹186 crore (by revenue) privately-held business, to a beverage behemoth today. Timely innovations, improved sales and distribution (S&D) tactics, as well as renewed branding helped the company achieve this, she says.

Frooti Fizz, for instance, is a logical extension of the mango drinks market, of which Parle Agro commands 26 percent, thanks to Frooti. Coca-Cola, with its Maaza, reigns supreme with a 40 percent share, while PepsiCo’s Slice lags at No 3 with 11 percent. 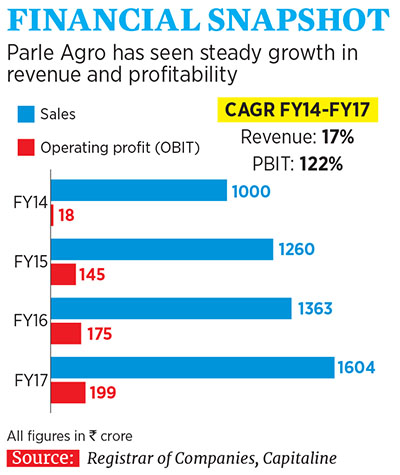 That Parle Agro should trail Coca-Cola is an ironic twist of fate. Nadia’s great-grandfather Mohanlal Chauhan founded the Parle Group in 1929, and by 1959 the company began manufacturing beverages under the supervision of Jayantilal, Mohanlal’s fifth and youngest son. Thums Up, Limca, Gold Spot, Citra and Maaza were part of the stable, the reins of which were then passed on to Jayantilal’s two sons Ramesh and Nadia’s father Prakash. (Biscuit empire Parle Products, best known for Parle-G, is run by the siblings’ cousin brother Sharad Chauhan.)

With the country’s economy opening up in the early 1990s, Coca-Cola s niffed an opportunity to re-enter India, a market it had exited in the late 1970s. They propositioned the Chauhans, who were struggling at the time to keep their beverage franchisees. “It was a difficult time for us, so we decided to sell our brands to them [Coca Cola],” says Prakash, 72. The sell-out prompted an amicable split between the two brothers, with Ramesh taking charge of bottled water brand Bisleri, and Prakash, the remainder drinks. Today, Thums Up, part of Coca-Cola’s kitty, remains the No 1 cola drink in India. Even so, Prakash shrugs off any hint of regret. “It’s in the past,” he says with a smile.

But Nadia, who serves as chief marketing officer and joint managing director, along with older sister and CEO Schauna, is determined to recapture that lost glory. “Our vision is extremely aggressive,” she says. “We want to get back to being the top beverage player in the country, which we lost after divesting.”
*******
Groomed from an early age by her father, Nadia recollects spending after-school hours and holidays at Parle Agro’s sprawling headquarters in Mumbai’s Andheri. At the time, people, including employees, referred to Parle Agro as “the Frooti company”.
“The brand is as old as I am,” beams Nadia. In 1985 when Prakash launched the mango drink, he stayed clear of glass bottles, which were the norm at the time. Instead, he tied up with Swedish company Tetrapak to launch a specially designed, rectangular pack, complete with an attached straw—the first of its kind to hit the Indian market. The paper-based packaging made it easier and safer for children, eventually making them Frooti’s largest and most loyal consumer base.

“They have a history of innovation,” says brand expert Jagdeep Kapoor, who worked at Parle Agro for about seven years in the mid-80s last holding the position of director. “They’ve always introduced new categories, products and packaging formats.”Click here for the full Tycoons of Tomorrow list
Take the case of Jolly-Jelly. When Parle Agro launched the drink in the mid-1990s, consumers were unfamiliar with jelly-based products. One of Nadia’s most enduring memories as a young girl is that of shouting out, “Jolly-Jelly 100 percent vegetarian!” to passersby on Juhu beach, and encouraging them to sample it. “We had to invest time and effort to educate consumers,” she says. The product, however, was ahead of its time and Parle Agro had to withdraw it. “Now you see jelly products everywhere, even at paan shops,” says Nadia.

Or consider how Prakash, while stalled in traffic during a daily commute, noticed hawkers selling peanuts in ₹2 newspaper cones to hungry travelers. “Why not create something that size to also quench their thirst?” he thought. And so Frooti’s ₹2.50, triangular ‘samosa pack’ was launched in the early 2000s; it helped Parle Agro achieve dramatic scale by penetrating the rural market.
*******
Frooti is more than just a product in the Indian marketplace,” says Kapoor, who founded brand consultancy Samsika Marketing shortly after his stint at Parle Agro. “It’s part of our psyche.” The ‘samosa packs’ and Tetrapaks helped create that mass appeal for Frooti, as did later products, such as small and large-sized Pet bottles for staggered and home consumption.

This translated into recurring sales for Parle Agro, but Nadia, then 18, on entering the business in 2003 also realised that with 95 percent of revenues coming from Frooti, the business was far too dependent on a single drink. (The remaining 5 per cent came from other products, such as Bailey’s bottled water and apple drink Appy).

Nadia sought to change this by diversifying the product mix. In 2005, Appy Fizz was launched, making it India’s first fizzy fruit juice. Packaged in a sleek black bottle, it was positioned as the ‘champagne of fruit juices’, and marked Parle Agro’s re-entry into the carbonated beverage space since selling out to Coca-Cola. After initial hiccups to get the product to stabilise—since fruit and carbonation were being amalgamated for the first time, explains Nadia—Appy Fizz is today Parle Agro’s fastest-growing brand clocking a CAGR of 38 percent over the last five years. It also commands 99 percent market share in the fruit plus fizz category, with local upstarts holding the residual share.

“Consumers were clearly looking for something different. They were tired of the colas, lemons and orange-flavoured carbonated drinks. Plus, this is a healthier option,” reasons Madhur Pandey, marketing head, Parle Agro. “Today, with Appy Fizz, we internally say that we are in the process of building the second Thums Up… ” To take the drink to the masses, Parle Agro recently launched a ₹10 palm-sized form of Appy Fizz, with actor Salman Khan as brand ambassador.

Impressive as this product portfolio was, it made the cracks in the system more apparent. “We were still a small organisation, and not necessarily cash-rich,” concedes Nadia. The new brands called for category building, or heavy advertising spends. Saint Juices, for instance, with its imported fruit pulp offered a healthier, more wholesome option, albeit at a premium. So, consumers had to be educated about its benefits. Moreover, manufacturing and S&D were being strained by the scattered focus on multiple categories.

It was then that Nadia regrouped her team and charted out the vision for Parle Agro that would take them back to being number one in beverages. They decided, in 2010, that the foods division and additional beverages would be shuttered, and, over the next 10 to 15 years, Parle Agro would singularly focus on its main beverages: Frooti, Appy Classic, Appy Fizz and Bailey’s drinking water. When their means would allow it, they would relook at diversification within beverages. The plan was also to take sales figures (own and franchisees) from ₹900 crore then to ₹5000 crore by 2018.

Between 2010 and 2017, Parle Agro invested in building new plants and enhancing existing ones, under Schauna’s leadership, who oversees manufacturing and HR. From seven manufacturing facilities, the company today has 13 units pan India, of which four are owned by franchisees (excluding Bailley’s 55 plants, which are all franchisee-run). “It was a mega expansion, with each factory requiring an investment of ₹150-200 crore,” says Schauna, 42, adding that they recently introduced robotics at two of their plants.

Simultaneously, Nadia took on the responsibility of evolving Parle Agro’s S&D systems. Project Cheetah, as it was coded, ran from 2013 to 2015, and resulted in Parle Agro digitising its sales systems and drawing on data to extract more from existing and new outlets. Between 2016 and 2017, Parle Agro further enhanced its S&D capabilities to handle multiple brands and categories. “The idea is to always remain future-ready. We don’t want to falter like we did earlier,” says Nadia. Today, Parle Agro reaches more than 15 lakh outlets, up from 3 lakh in 2004.

Towards the end of 2015, in what is arguably Nadia’s boldest and riskiest move yet, she re-launched Frooti, with a new logo, look and feel. Over the years, the brand had created a strong consumer base among children. But as those children grew up, they grew out of Frooti, explains Nadia. “We needed to keep the youth connected with the brand, and the only way to do that was by breathing new life into it.” The challenge, however, was to do this while retaining loyalty among children.

Nadia roped in London-headquartered design consultancy Pentagram to reimagine the packaging and New York-based Sagmeister and Walsh to create the advertising campaigns. With Shah Rukh Khan as brand ambassador, Frooti was re-launched to mixed reactions. “Some people loved the new look and others thought we were completely crazy,” reminiscences Nadia. The jury too was divided: “Brands need to change to remain relevant and contemporary,” says brand expert N Chandramouli, while Samsika’s Kapoor believes, “Why fix it if it ain’t broke?”

But the numbers testify to Nadia’s daring. Frooti, which had held 18 percent of market share in 2010, well behind Maaza and Slice, bumped its way to the No 2 spot in the mango drinks category. The slew of changes have also helped Parle Agro reduce its dependence on Frooti with 52 percent of sales now coming from it. They’ve also catapulted Parle Agro’s brands to touching distance of the ₹5,000-crore target (own sales plus those of franchisees) which it will hit later this year. “We’re now eyeing ₹10,000 crore by 2022,” says Nadia, with a twinkle in her eye. With the building blocks in place they can achieve that too.