Should Karunanidhi Retire From Politics Now? 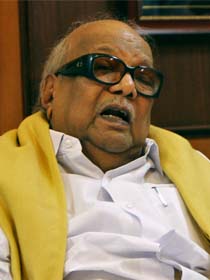 I would like my grandchildren to see some fresh faces in Tamil Nadu politics (desperate sigh).
Muthuvel Dakshinamurthy (a.k.a ‘Kalaignar’ Karunanidhi) began his wily, scheming, corrupt, lustful, cinematic, persistent, sanguine, never-say-die political career in 1937 at the age of 13. He energetically fought the Congress Party when the rest of the country focused on the little matter of Independence.

The imposition of Hindi in the then Madras Presidency was the first political issue he fought against. Fighting against untouchability and suppression of women in Hindu (but not other) societies were some of the causes he championed. It is another matter that he abandoned those causes once he rose to prominence and focused exclusively on power and currency.

By 1947, Karunanidhi and his mentor C.N. Annadurai had developed political ambitions. The Independence that others had fought for and won had opened up new vistas of opportunity that the duo weren’t going to miss. But there was one problem. The leader of their sub-nationalist movement Dravidar Kazhagam, ‘Periyar’ E.V. Ramasamy Naicker, had called for August 15 to be observed as a Black Day. Ostensibly on a patriotic note, Anna and his thambi Karunanidhi disagreed with Periyar and parted ways.

In 1949, they started the Dravida Munnetra Kazhagam (DMK)—at least, the first generation version of the party. It would go on to evolve into its 2G and 3G versions that we all know only too well about.
An early indication of what kind of a politician Karunanidhi will develop into came after a bye-election that the DMK won against the ruling Congress in the 1950s. Party leaders who had contributed the most to the victory had assembled at the celebrations hoping Anna would praise their hard work.

To their horror, however, Anna presented a gold ring to Karunanidhi, who had played only a peripheral role, and lavishly praised him. Stunned, the leaders asked Anna in private to explain. He told them Karunanidhi had paid for the ring himself and had given it to him the previous night, requesting that the ring be presented to him at the ceremony. “You pay for the jewels and I will present them to you too,” Anna added.

Karunanidhi also had a colourful personal life. He is the only chief minister I know that has two wives. Given that my blog is meant for the entire family, I don’t want to discuss more of this aspect of the old man’s life here. You can read the late poet Kannadasan’s twin-volume autobiography in which Karunanidhi’s younger days are detailed.

Back to politics. Karunanidhi was not DMK’s first choice to be the successor for Anna. There were other illustrious, honest leaders who coveted the opportunity. But when Anna died in 1969, Karunanidhi pleaded with the party’s rising star and a heartthrob of Tamil film fans, M.G. Ramachandran, to support his candidature. Riding on MGR’s backing, Karunanidhi defeated the other contenders and became the chief minister in 1969.

But as soon as he was sworn in, Karunanidhi began sidelining MGR in the party. He was jealous of MGR’s popularity both within the party and across the state. So he denied MGR a Cabinet berth on the grounds that a busy actor would not be able to do justice to his ministerial duties. When MGR became a bitter critic of the chief minister, Karunanidhi suspended him from the party.

It is another matter that MGR formed his own party and grabbed power, never to lose to Karunanidhi till his death in 1987.

In 1976, Indira Gandhi dismissed the DMK government on corruption charges though the real reason might have been her Emergency-era paranoia against non-Congress chief ministers. She set up a panel called Sarkaria Commission to inquire into the charges. The panel defined Karunanidhi and his men as being ‘scientifically corrupt.’ It meant their corruption was systematic and left no trail.

Karunanidhi has this funny habit of giving gaali to Tamil voters every time they put him out of power. During the campaign, he would tell them they are the only ‘Gods’ he worshipped. But once they fix him, he would call them ‘beggars’, ‘numb creatures’ and ‘ingrates’.

In 1984, he was going to lose so desperately in the Assembly elections, that he used an old picture showing him in a happy chat with his (now) archenemy MGR to ask for votes. His argument was that MGR was bedridden in a hospital in the US and could not possibly govern the state. Despite that, the voters gave an overwhelming verdict in favour of the semiconscious patient and routed Karunanidhi’s ilk.

He became the chief minister only after MGR died and the AIADMK had split. But then, Jayalalitha was the new rising star and he couldn’t believe his own eyes. For a man who had engaged in political sparring with C. Rajagopalachari, K. Kamaraj, Bhaktavatsalam and MGR, a former actress 25 years his junior was a climb-down.

Given the feudal background of the DMK, Karunanidhi resorted to the only trick India’s male politicians have in their arsenal against powerful female rivals. He attacked Jayalalitha personally and oversaw a clutch of sidekicks saying horrendous things. But she couldn’t be scared into submission. Jayalalitha went on to become Tamil Nadu’s single largest politician, and more popular than Karunanidhi even when out of power.

The one thing to recommend Karunanidhi for is his tenacity and an attitude that never gives up. Tamil voters have rejected his candidature for chief-ministership six times in the last 35 years. Not once did he lose hope. Never did he contemplate retirement. Swan songs written for Karunanidhi could fill a fat volume but he belied all of them.

Even now, he must already be thinking of the next step in his political journey. His unfinished agenda includes divvying up the wealth between his sons and daughters, firewall the party from a split after his death and make sure the investigation into the 2G scandal fizzles out. A million-war veteran, he is not going to let these minor ripples force him out of the water.

But then, why am I advocating his retirement?

The man is 86 years old and bound to a wheelchair. His son, M.K. Stalin virtually ran the show in the state. None of the party leaders looks up to Karunanidhi anymore, either for ideological leadership or ‘practical’ decisions. They are busy falling into the Stalin camp or the rival M.K. Azhagiri camp headed by his other son.

Karunanidhi has lost control over his family and party a long ago. Even in 2009, when the DMK was negotiating with the Congress for Cabinet berths in the Centre, he was not informed of the details.

His fighting spirit hasn’t faded a bit, but his illness prevents him from taking action. He also doesn’t seem to understand the modern aspirations of the newest generations. His political plans don’t cater to their needs such as higher education, job creation, infrastructure or economic reforms. His old-style politics—marked by oratorical flourish and an economic policy revolving exclusively around freebies—cannot capture their imagination.

When the next elections are held in the state, he would be 91. The voters need a younger, more progressive, less divisive leader to take them into the new millennium. The 1937 anti-Hindi campaigner doesn’t fit the description.