Graphic India won over the world with a popular homebred superhero, Chakra. But for Sharad Devarajan, its mastermind, the journey has just begun 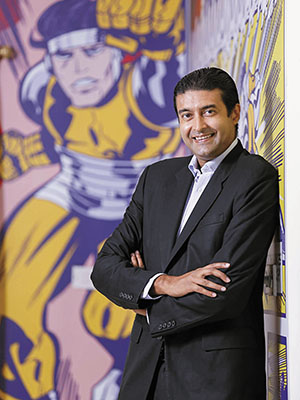 Sharad Devarajan is no stranger to the parallel universe of comics. Twenty years ago, he had come to India from the US (he grew up in New Jersey where his father worked with companies like BMG and Warner Bros) as a licensee for Marvel and DC Comics. He was 20 then and on his first international assignment.

At the time, distributing comic books in India was an uphill task. Not only was it a logistical challenge to get the books across the country, launching superheroes in multiple languages also needed extensive planning and investment.

But despite such hurdles, Devarajan’s Pavitr Prabhakar, the Indian avatar of Spiderman aka Peter Parker that he launched in 2004, did well. It was translated into a number of foreign language editions and published across the globe by Marvel Comics. Indian readers also took a fancy to the village simpleton-turned-Mumbaikar who was jumping rickshaws instead of skyscrapers in New York.

Prabhakar’s success propelled Devarajan to think of something bigger: To go beyond sourcing animation characters from the West and create homegrown superheroes. That’s how Graphic India was born in 2013, with an investment of $2.8 million from private equity firm CA Media for a 33 percent stake, along with a vision of wowing the global audience with Indian characters.

Now Indians are familiar with the concept of superheroes. Generations have grown up on Amar Chitra Katha and the heroics of characters from Indian mythology. In fact, among the first homebred superheroes from India was Nagraj, the king of snakes, which was created by Raj Comics way back in 1986. Devarajan knew it would need a Herculean effort to wrest readership from long-term fan favourites.

That’s when he turned to the granddaddy of all superheroes: Stan Lee, 92, former president and chairman of Marvel and the creator of characters like Spiderman, Iron Man, Hulk, Thor, X-Men and many others. Devarajan knew Lee since 2004. At the time, he was working on Pavitr Prabhakar and had spent a lot of time in Lee’s Los Angeles office discussing the superhero universe. Given that Lee was always game for a creative challenge, convincing him to test his genius in India was a cakewalk.

“Stan has always been fascinated by Indian culture and its richness in tradition and morality, so when I asked him if he would be interested in working on an Indian superhero with us, he was excited,” Devarajan says. He was also aware of Lee’s interest in Eastern philosophy, recalling how Silver Surfer, a fictional character from the Fantastic Four universe, was influenced by Oriental sensibilities. “I came across a quote from Omar Khayyám in one of the Silver Surfer comics and I was blown away. When I met Stan Lee, I asked him about that quote and he recited it verbatim,” he says.

The new character that Lee created for the Indian audience applied the super successful Spiderman formula—teenager with special powers—and threw in a bit of Iron Man, with the inventive genius of a super suit. Move over Peter Parker and Tony Stark. Welcome Chakra: The invincible, superhuman alter ego of Raju Rai, a 14-year-old tech whiz from Mumbai.

It also got its own movie, made for television, called Chakra: The Invincible (it aired on Cartoon Network India in November 2013). A marketing tie-up with Angry Birds creator Rovio Entertainment garnered it over 40 million hits on the game developer’s multi-platform channel ToonsTV. It appeared as a clickable icon on the Angry Birds app, which directed users to ToonsTV. With this, Chakra acquired a global appeal that ensured it overtook Nagraj in reach and popularity. Graphic India had truly arrived with a bang.

Lee is effusive in his praise of Devarajan. “I’ve been tremendously impressed by the way Sharad is leading a new wave of Indian animation and comics. I’m excited by the fact that he’s certain to have a huge impact, not only on kids in India, but on audiences around the world. Superheroes like Chakra have the potential to introduce Indian themes and culture to audiences in every part of the globe through the power of great storytelling and unbridled imagination,” Lee told Forbes India in an email. 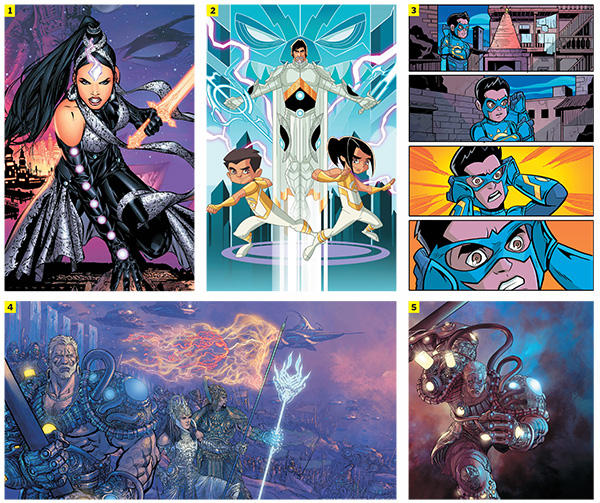 Image: Graphic India
The character of Devi, created by filmmaker Shekhar Kapur 2. Animated series Astra Force features actor Amitabh Bachchan as a superhero 3. Chakra was a huge hit as a TV movie 4, 5 & 6 (down). 18 days: The Mahabharata had stunning graphics which added a modern feel to a detailed narrative of the Kurukshetra war

But Devarajan feels this is not even the tip of the iceberg. Countries like Japan, Korea and the US have created multibillion dollar businesses through Manga comics, anime and film franchises by riding on characters that can be monetised through various streams. India has a long way to go in the character entertainment space. But in the 20 years that he has been here, change has seeped in, he says.

He was at the forefront of a new wave in 2005 when he was the CEO and publisher of Virgin Comics and Virgin Animation—companies he co-founded with Sir Richard Branson and his Virgin Group, author Deepak Chopra and his son Gotham, filmmaker Shekhar Kapur and entrepreneur Suresh Seetharaman. Together, they created characters like Devi and Sadhu, which became a hit in India as well as in the West. Later, Devarajan bought out Virgin Comics and renamed it Liquid Comics, catering mainly to the Western audience.

Devarajan’s urge to create something exclusively for the Indian market led to the creation of Graphic India. He had noticed that the Indian market had rapidly changed over the years, that there was synergy of different mediums in the entertainment space. The problem of physical distribution of books had become a thing of the past. And he found himself a multimedia space in the comics industry.

One of his able partners-in-crime was Gautam Padmanabhan, CEO of Westland Ltd and publisher of popular writers like Amish Tripathi and Ashwin Sanghi. Padmanabhan was roped in to take care of publishing comic books for Graphic India. “When Sharad approached us for the publishing part of Graphic India, we were really thrilled. We had never done this before, but accepted the challenge,” he says.

Once publishing was taken care of, Devarajan turned to digital as the next big opportunity. With a fan base hungry for smarter content and a demographic tilt towards under-25 mobile users, he knew this was a market waiting to be tapped. Also, there was the absence of a standard character entertainment franchise in India that could be transported globally to a bigger audience. The gaps were all too visible, and tempting.

“I saw that while the world was changing, everyone wanted to be in every business. You suddenly have this multi-platform approach and multi-revenue streams for profits. Global content had become king,” Devarajan says.

That’s when he let loose. 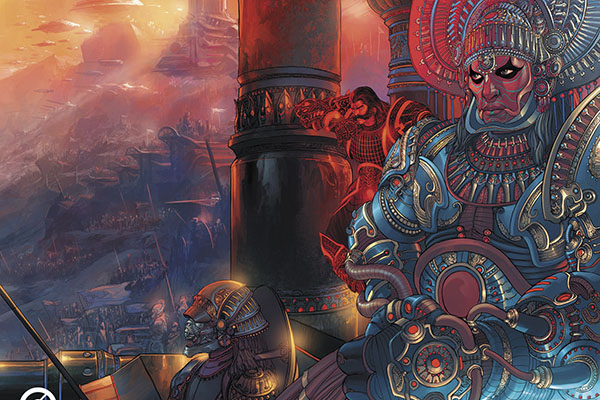 In 2014, Devarajan roped in Grant Morrison, a Scottish comic book writer known for The Invisibles and Batman comics, to work on Graphic India’s web series called 18 days: The Mahabharata. Stunning graphics added a modern feel to a detailed narrative of the epic Kurukshetra war.

This June, Devarajan announced the start of the production for Astra Force, a 52-episode animated series to be aired on Disney India featuring actor Amitabh Bachchan as a superhero. While the investors for Graphic Media, CA Media, put him in touch with Bachchan’s office (CA Media also manages the digital rights for the actor through a group company), the Bollywood superstar himself was keen to take on the unique role, and lend it his voice. “Sharad came with this idea. It had a lot of heart and Bachchan’s association with it made all the difference. Overall, Astra Force is a great story and concept,” says Vijay Subramaniam, president and head of content, Disney India.

Vivek Raicha, head of investments, CA Media, believes in Devarajan’s ability to attain superheroic glory. “We are here with Graphic India for the long term. It took a long time for a Marvel or a DC to reach iconic heights. Because of digitisation, the entire cycle can be shortened and we can monetise the characters at a much faster rate.”

Graphic India now wants to make content which will have multiple streams of revenue.

Gotham Chopra, who was with Devarajan at Virgin Comics, says, “Graphic India embodies every ideal that Devarajan has nurtured in himself—starting as an Indian kid growing up in New Jersey to being an American in Bengaluru building the globe’s next great character entertainment brand.”

Devarajan’s thriving business means he hardly gets time to read comic books. But he remains a fanboy first, he says. That’s why his house is stacked with piles of comic books from floor to ceiling. Those give him his super power.

Tweets by @forbesindia
Nathan Eagle: Megabyte mogul
The man Vs The machines