Millions of smartphone owners in poor countries can't afford to get online, so Nathan Eagle gives them data for free. Not everyone agrees with his methods 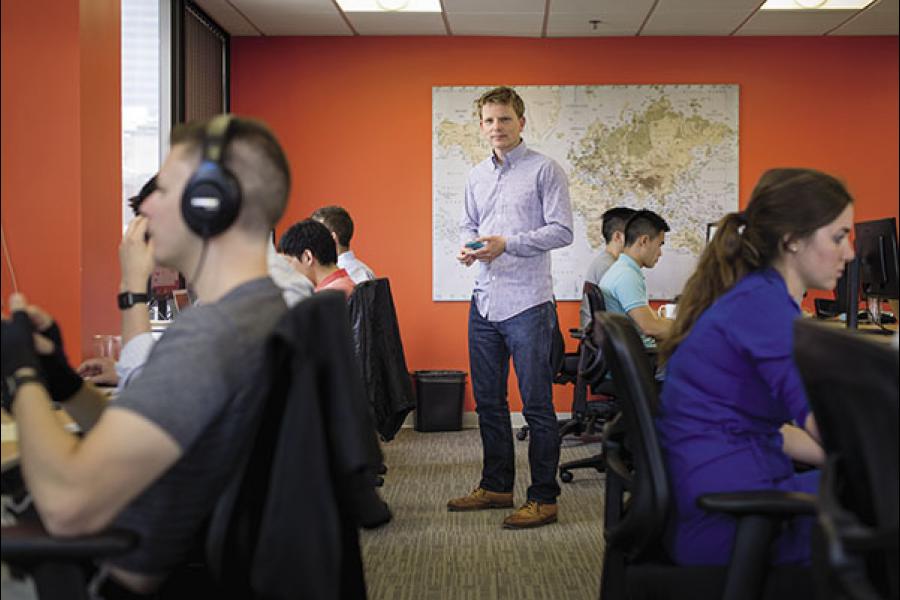 There are 7. 3 billion people in the world. By 2020, some six billion will own a smartphone, yet many won’t use these revolutionary devices to go online. “They’re using smartphones like dumb phones,” says Nathan Eagle, founder and CEO of Jana.

You’ve probably never heard of Jana, but for millions in the developing world, it’s a meal ticket to the mobile web. Indian users of its mCent app can get Rs 13 worth of mobile data as a reward for downloading and trying LINE, a chat app, or Rs 28 worth for using the music service Saavn, free data they can use to surf the web or look for a job. LINE and Saavn pay for the data, and Jana takes a cut. Its goal beyond increasing profits is to provide free internet to billions of people. Fanciful as that sounds, mCent has collected 30 million users in less than a year, thanks to long-standing partnerships with 311 mobile operators in 93 countries.

“I’m not aware of any other company that has more than one-tenth of this scale,” says Eagle, a 38-year-old blonde, no-nonsense ex-academic who founded Jana six years ago. The only exception may be Internet.org, which is Facebook’s grand and contentious project to get the next billion connected to the internet and has a third as many users as Jana.

Jana spent years building out its data crediting infrastructure, making money through sponsorship deals with brands like Unilever. Indian consumers would buy a shampoo bottle and redeem a code in the packaging to get free airtime. Then in early 2014, Jana went fully digital with mCent, giving airtime rewards just for trying out apps like Amazon or Indian rival Flipkart, and its growth exploded. Within a year, its annual revenue run-rate had shot up from a few hundred thousand to $50 million, and mCent was the fifth most popular app in India. Jana became profitable in early 2015. Around half of its revenue comes from a handful of big-name developers like China’s Tencent, Amazon and Twitter, with the rest (1,500 apps and counting) coming from a long list of unfamiliar names.

Jana has succeeded because it solves the harsh economics of mobile in emerging markets: Handset prices have plummeted while the cost of data has not, as if in defiance of Moore’s Law. Indians can buy a smartphone for as little as $40, yet their average mobile bill is a relatively expensive $7 a month, of which half accounts for web access. Data in India may be extremely cheap by Western standards, costing around $4 for a gigabyte of 3G data (compared with $20 per GB for a Verizon prepaid mobile hotspot in the US), but that’s still pricey for many locals who make a minimum wage of 20 cents an hour.
Mobile data costs up to 10 percent of a person’s average wage in Brazil, Eagle says, and more than a third of someone’s income in Africa, while in the US it’s more like 1-2 percent, according to the International Telecommunication Union.

The result: Only 57 percent of India’s smartphone owners bother turning on their data, and those who do consume a mere 80 MB per month on average, about a tenth of what Americans use. In Johannesburg, teens congregate at the big mall on weekends not to shop but to use its free Wi-Fi, says Ovum’s South African analyst Thecla Mbongue. “You have lots of people sitting there and downloading everything,” she says.

More cell towers would help increase bandwidth, but carriers in the developing world often have thin margins, increasing competition and paltry capital budgets. In many countries, average revenue per user is declining as poorer people get onto the network. “If all of those people were to get online, it would be a horrible service,” says Ovum’s Bengaluru-based senior mobile analyst Neha Dharia. “The reason we can get online is be- cause only a few of us are online.”

This poses a problem for large internet firms such as Facebook, Twitter and Google that need to figure out how to serve the data-starved masses (with ads). Google’s Project Loon and Facebook’s Internet.org both include plans to beam free Wi-Fi over developing nations from high-altitude balloons or drones, but test fights are only recently ramping up, and it’ll likely be years before there’s any real-world impact.

A quick and dirty solution is setting up deals with carriers to build zero-rating systems, where internet companies cover the cost of accessing their sites. Facebook, Google and WhatsApp have pioneered the practice for years with stripped-down services like Facebook Zero (a text-only version with no photos), while Google has a data-sponsorship programme in the works to make Android apps more attractive, according to reports earlier this year.

The practice is controversial in principle, since apps that can pay their users’ data bill have an unfair advantage over smaller ones that can’t. End users can also get a distorted view of what the internet is. Around 11 percent of Indonesians who said they used Facebook Zero didn’t realise they were on the internet at all, according to a study commissioned by the website Quartz in early 2015. Indian campaign groups have attacked Facebook’s Internet.org app, which lets users browse a selection of sites for free, saying it misleads new smartphone users on the extent of the open web.

Jana claims it sidesteps these infringements on net neutrality because once mCent’s users have tried a sponsored app, they can access any website, watch any video or install any app they like. “We give them at least double the data used [for the free download],” says Eagle.

Jana’s rapid growth should give Google, Facebook and carriers confidence in their zero-rating systems, controversies aside. “Sponsored data is absolutely one of the tools that operators in emerging markets need to drive up data consumption,” says Strategy Analytics analyst Phil Kendall.

Jana got its start in 2009 after Eagle completed a stint as a Fulbright professor at the University of Nairobi while still a member of the faculty at MIT’s Media Lab. In his research, Eagle got access to the back-end billing systems and data for operators in eastern Africa, flying to cities like Kigali, Rwanda, to poke around the wires and cables of underground data centres.

During a trip to the coast of rural Kenya, Eagle found himself working out of a hospital where, to his surprise, a nurse approached ask- ing if he’d give blood to help with an emergency transfusion. Over the next few months, he was asked several more times to give blood. “Out of my own self-interest I looked at why we kept running out of blood,” he says. The problem was latency. The delivery guy came around only once every two weeks to bring new blood and report back on supply levels.

Eagle programmed an SMS system that allowed the nurses to text their daily supply levels to the central blood bank. The hospitals loved it, but after a month, no one was using it because each text took a small chunk out of a nurse’s daily wage. Eagle used his access to the carrier’s billing system to write a simple programme that paid nurses ten Kenyan shillings, which included a small thank you amount for each SMS to the blood bank. Almost immediately, the nurses started using the platform again. Eagle paid the data costs out of his own pocket—less than $250 a year—before another organisation stepped in. Thus was born sponsored data.

Eagle raised $1 million in seed money to build the initial data-sharing system and spent the next five years hiring telco engineers and flying out to remote regions of Africa and Asia to meet local carriers. At one point he flew to Lagos, Nigeria, with a duffel bag of dollar bills to meet the middle manager of a local operator, offering the money for a regular connection to its billing system. By 2011, Jana had raised $8.5 million from Spark Capital and started to sign up big brands like Nestlé, Procter & Gamble and Unilever to sponsor airtime rewards.

But Eagle wasn’t happy. Jana was morphing into an ad agency, and he was going to have to triple head count to help run each brand’s campaign. In late 2013, Eagle made the gut-wrenching decision to tell Unilever that Jana was pulling the plug on its campaign and would return its cash. “It was enough money to keep me up at night,” he says.
Instead, he got his engineers to create mCent, the app that paid consumers in data to try out any other app they wanted. Within months of its release, the number of mCent’s users shot up to the millions. “There is no doubt in my mind it was the right call,” he says.

Jana collects valuable data on each mCent member, such as app-usage history and which friends were signed up. Clients like LINE, for instance, pay Jana to get their apps in front of users who spend more than ten minutes a day on WhatsApp. Jana has to be clear with users about what their free data will really cost in lost privacy. “The problem for all these business models is they’re so often not transparent,” says analyst Cyrus Mewawalla of CM Research, adding that poorer consumers who are unfamiliar with the nature of the web risk being exploited.

mCent can fall victim to exploitation, too, when users download lots of apps they don’t care about just to get free data. “We’ve seen a lot of games that have integrated providers who will show you an ad for another game,” says Neil Rimer, co-founder of Index Ventures, who is sceptical about the quality of Jana’s impressions. “I’m not a believer because you tune the ad out completely.” Jana avoids that by personalising mCent to the relevant users, Eagle counters, and tracking time spent in apps downloaded.

Eagle also says some of the critics of his corporate-sponsored approach are being paternalistic. “Giving access to only a small slice is not a great service. We want people to have access to the [whole] internet. The benefit far outweighs the downside of exposing people to global brands.”