What's Next for Globalization?

Could you explain the concept of globality?
In the late 1990s, multinationals went to the developing world basically playing a giant labor arbitrage. They outsourced to low-cost companies in India and China — and in the process taught them how to produce quality products. These developing companies built scale based upon the volumes they received from the developed country companies and figured out how to serve the developed world. Some were happy merely being suppliers. Some asked themselves, "Why can't we be the multinational?" And they began to compete with their outsourcing customers. 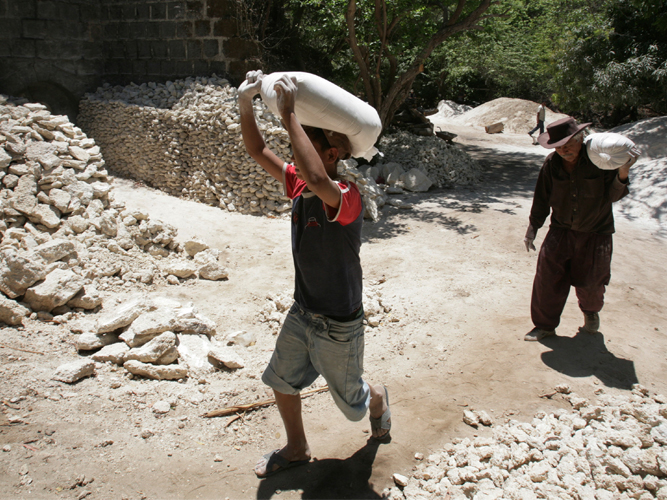 Image: Oswaldo Rivas / Reuters
In the U.S., a contractor typically buys cement in bulk — enough to pour a foundation. But in Mexico, individual homeowners buy cement one bag at a time, when money is available.
How do multinationals manage a single organization that must adjust to the needs of various markets around the world?
If you're operating just in the U.S. and Europe, there are differences in culture, laws, customer needs, and ways of doing business, but the reality is you can operate as basically one company across those markets. As much as we think of them as heterogeneous countries and markets, compared to India and China, they are very homogeneous.
We use the idea of "manyness” to describe what it takes to manage multinationals in this era of globality. Tata may be the ultimate example of "manyness.” The Tata Group is a collection 114 different companies. The parent company provides guidance and gives an occasional push, but the companies have a tremendous amount of autonomy to make decisions on a local basis. Of course, there are collective operations and some fundamental rules, but there really isn't just one Tata. It's more like 114 different Tatas. The top-down, manage-from-the-center mindset doesn't work in the current world. Something more like the "manyness” of Tata will be critical for multinationals going forward.
Are companies approaching their strategies within countries in diverse ways, as well?
Yes. China is a good example of why companies often must adapt their strategies within a country. Despite some significant differences, Shanghai and Beijing have distribution systems that are very similar to those of the developed world. But in smaller cities, the third and fourth tiers, you start seeing a shift to a very fragmented system. There are more and more mom-and-pop operations that require a different approach. And in the rural markets, you'll often have to train the consumers on what your product is, because they've never seen it before and they've certainly never used it before.
Give some other examples of companies that have adapted to the current environment effectively.
Good Baby is a Chinese company, but it manufactures strollers for the world. If you buy a Good Baby stroller in Scandinavia, it has that sleek Scandinavian design. And if you go to Japan the stroller folds up to fit in the absolute smallest space possible, because that's what the Japanese put a premium on. A Good Baby stroller in the U.S. looks like an SUV — it has lots of room and cup holders, because that's what Americans want.

In other words, you have a Chinese company designing products for many different markets and localizing itself, because it recognizes that the one-size-fits-all approach doesn't work. It's Business 101, but so many companies don't really respond to the local market, they try to transfer what they already do. Ironically, for this Chinese company, in many parts of China, the baby stroller didn't exist. In much of their home market they actually had to explain what it is.

Here's another example. In the U.S., a contractor typically buys cement in bulk — enough to pour a foundation. But in Mexico, individual homeowners buy cement one bag at a time, when money is available. They mix and pour the cement themselves. They're replacing a dirt floor with a cement one. The Mexican company Cemex realized that people buying cement by the bag represented an opportunity to brand the product. The concept of a branded cement product for the consumer in the U.S. just doesn't exist, but Cemex can charge a premium because its brand is recognized. But the company didn't just stay within its home market.

In 1990, it was a billion-dollar company. They knew they were about to see competition from the global cement companies coming to Mexico. They didn't want to be gobbled up, nor did they want to be a second-tier player. So they bought cement companies in places like the Philippines, where demand was growing and their experience in developing markets was an advantage.
They built up infrastructure, learned how to make acquisitions, and how to improve the operations of the acquisitions. They also improved their own operations with the lessons that they learned from the companies they bought. They've now grown to be an $18 billion company and a real leader in the industry.

The big message here is that companies have to understand that the world is fundamentally changing. I got myself in a little bit of trouble on a plane one day because I started asking the other passengers if they would ever fly on a Brazilian-made jet. Most said they wouldn't. They were shocked to find out we were all on a Brazilian-made jet, because "How can Brazilians make this?” Well, they can, they do.

Embraer came out of a post-WWII effort by the Brazilian government to build an aeronautics industry. We don't associate Brazil with aeronautics, but they have become in many ways an aeronautics powerhouse. Embraer has made tremendous advances in designing regional jets that are smaller and efficient to operate while still feeling more like a full-size jet. The globality of this is that sophisticated products, even industries, can come from everywhere. You're competing with everyone from everywhere for everything.

You have to break whatever stereotypes you have. Remember the stereotype that people used to have of Japan? "Made in Japan" in the early 1970s meant transistor radios and little plastic drink umbrellas. The first Toyota cars sold in the US were viewed as "junk” — poorly made and not what the US customers wanted. Now, of course, Japan means high quality. It's a fundamental shift. Expect those kinds of changes to happen.

Part of globality is recognizing that the competitive landscape is constantly changing. There are a lot of entrepreneurial people in developing economies around the world. Many, who are now in senior positions, have been educated at Yale, Harvard, Wharton, and MIT.
They are capable of doing amazing things. They have access to very low-cost labor, so when all is said and done, these companies can literally come out of nowhere. They do it with ingenuity born from hunger to take their place on the world stage. They want to be the next multinational. They want to be in control of their own destiny. And of course only a few will. But since we're talking everyone from everywhere, they will be a significant additions and deletions into the ranks of the Business Week 1000.
Hal Sirkin, is senior partner and managing director at the Boston Consulting Group and co-author of the book 'Globality'

Tweets by @forbes_india
What is the For-Profit Social Enterprise?
A Practical Guide to Managing Innovation