Diversity has always been a key element of any creative society. And some of the world's biggest corporations like IBM, Apple, HP and Google know this only too well

About a few weeks ago, when I told an old school friend that we were considering a story on gays like him at the workplace, to put on the cover of our magazine, he was quick to dissuade me. “I’d urge you not to do that. This is a topic that is still taboo at a majority of workplaces,” he said. He was absolutely right. Even today, most folks like him prefer not to come out of the closet for the fear of ridicule and even worse, discrimination. 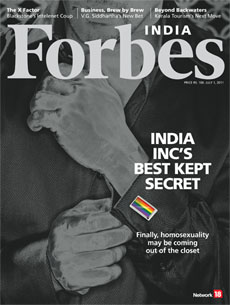 So why did we still go ahead? You’ll find the answer when you turn to page 40. Our contributing writer Anuj Chopra, who won the CNN Young Journalist Award in 2005, travelled to Bangalore to discover a range of companies, mainly multinationals, who have stepped forward to bring the gay inclusion agenda into the mainstream. And they are doing so, not because of a sudden resurgence of liberal thinking, but because it makes ample business sense to do so. You’ll find Anuj’s remarkable story resonates with the experiences of real people and progressive workplaces in India who’re making headway in pushing the diversity and inclusion agenda.

In fact, diversity has always been a key element of any creative society. And some of the world’s biggest corporations like IBM, Apple, HP and Google know this only too well. They have enough empirical evidence to show the difference that gay and lesbian employees make to the innovation agenda — especially if they’re allowed to come out and express themselves freely at the workplace.

We’re hoping that this story acts as a wake-up call for Indian companies, who, for most part, are still reluctant to grasp the nettle. The prevailing attitudes will be harder to change, unless we get over our squeamishness and at least begin talking about the issue. It must be strongly supported by the top echelons of Indian industry. But there’s the moot point: Unless there are gay and lesbian role models across the industry, there’s very little chance that young employees will muster up the courage to come out and openly declare that they aren’t straight.

For the next couple of weeks, our editors will be leading meaningful conversations on this theme on our site, our social media platforms and also on Firstpost.com. I’d urge all of you to join in. Share your views and ideas on how to make our workplaces truly inclusive and free from prejudices.