Trust, more than collateral, is vital for taking on business risks. This enabled capitalism and entrepreneurship to survive in the years of independence

This issue’s cover theme on Marwari businesses is unusual for Forbes India. Not because we don’t track success or entrepreneurship, for that is our stock-in-trade, but because we have never tried to profile an entire business community collectively. What we are trying to do with this issue is to understand the social context of a business community’s continued success. 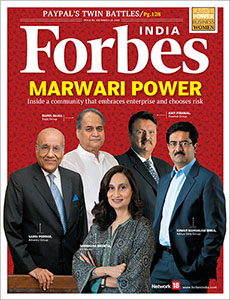 India is an oddball in terms of entrepreneurship because our business successes are often the result of community support and seed funding. Thanks to our huge diversity, and thanks particularly to the Indian state’s suspicions about business from the time we became independent in 1947, it was the social capital provided within communities that proved critical for entrepreneurship. Whether it is the Marwaris, the Parsis, the Gujaratis, the Reddys, the Chettiars or many other communities, business has flowered around a community’s social capital. This is because trust, more than collateral, is vital for taking on business risks. It was this trust that enabled capitalism and entrepreneurship to survive in the hostile initial years of independence—and all the way till the opening up of the economy in 1991.

The Marwaris are, arguably, among the three or four most influential business communities in India—and even abroad, if one considers the fact that Lakshmi Mittal is the world’s largest steelmaker and the Aditya Birla group was a global business long before globalisation became a fashionable term in India. Originally hailing from the Marwar region of present-day Rajasthan, today’s definition of Marwari has outgrown this geographical limitation. Most successful Marwaris, despite an emotional connect to the region, live outside Marwar.

In many ways, the early Marwaris were ahead of their times in terms of understanding risk and cash. Their parta system of daily cash-based accounting, for example, enabled them to keep close tabs on business trends which even today’s sophisticated ERP systems may not be able to match. If today’s trend is professionals turning entrepreneurs, the Marwaris did this decades ago by encouraging valuable employees to develop their own businesses as suppliers to core businesses.

But, in other ways, the Marwari businessman has lagged behind change: For example, it is difficult to think of a single big Marwari business that has made waves in IT or biotech or any business that involves knowledge and IPR. Marwaris have largely excelled in trading and commodity-based businesses.

Clearly, the challenges ahead are immense in the brave new world we are entering. But Marwari businessmen are also beginning to change. More power to them.