The best CEOs first demand a lot from themselves, before they turn their attention elsewhere. Simply put, they lead by example

Our best work usually takes time, lots of time. Our writers like to dig deep, look for unusual sources, spend time observing subjects and travelling to new places. That’s why this edition’s cover story is the richer for it. 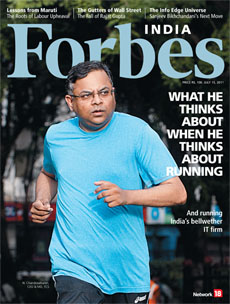 When our Deputy Editor Shishir Prasad stepped out to work on a large feature story on N. Chandrasekaran many months ago, the purpose was amply clear. Here was a CEO who had quietly shaken up the foundations of India’s biggest IT firm, all in a matter of 18 months. Its market value had almost doubled. So much so that TCS had suddenly begun to nudge aside Infosys, Indian software services’ poster boy, and emerge as the new bellwether in the sector.

So, exactly what had Chandra done inside TCS to bring about a new spring in its step? Despite all the wall-to-wall media coverage on the company, so little is known about how his leadership has delivered such dramatic results. After spending countless hours talking to a range of executives inside, his mentor S. Ramadorai and even his teachers and batchmates from engineering school, Shishir (with help from Mitu Jayashankar and N.S. Ramnath) discovered a remarkable story of personal transformation. I won’t reveal any more, but our story on page 32 offers a graphic picture of how a modern day CEO manages a large complex organisation, discovers new horizons of growth and helps ratchet up performance through people.

More importantly, as our story reveals, the best CEOs first demand a lot from themselves, before they turn their attention elsewhere. Simply put, they lead by example.

At Forbes India, we’ve never believed all that talk about long-form magazine journalism being dead. This story strengthens that conviction. Shishir tells Chandra’s story so vividly that you can almost visualise the scenes playing out in your head. So I’d advise you to curl up in bed and savour this edition. And please do share your thoughts on the story with me.