The faces behind the billions

This has been a rollercoaster year for the world’s richest. Plummeting oil prices, volatile stock markets and slowing growth in many parts of the world have taken their toll on the members of the elite club of global billionaires. This turbulence is in ample evidence in this year’s edition of the Forbes World’s Billionaires list, the definitive listing of the wealthiest people on the planet. 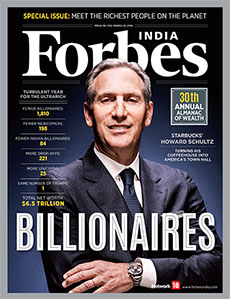 The figures are telling. The list, the 30th such drawn up by Forbes, has come up with fewer billionaires this year, at 1,810, down from 1,826 in 2015. There are 221 who have lost their billionaire status, while 198 have made an entry. But most importantly, the aggregate wealth of the richest people on earth stands at $6.5 trillion, down a hefty $570 billion from last year. Of the billionaires who figure in both the 2015 and 2016 lists, as many as 892 lost wealth, while 501 saw an increase.

Dig deeper and some interesting stories emerge. The hallmark of a true entrepreneur is his resilience, and Bill Gates demonstrates that by holding on to his number one position for the third time in a row, despite his wealth falling by $4.2 billion. Gates has topped the list a staggering 17 times out of 22.
Warren Buffett also holds on to his number 3 position, while Carlos Slim Helu of Mexico, whose wealth took a $27.1 billion hit, has slipped from second to fourth place. Amancio Ortega of Zara replaces Slim at number 2. The list also highlights the continuing rise of the internet economy, where Facebook’s Mark Zuckerberg (at number 6) shows a sharp increase in wealth—$11.2 billion—and breaks into the top 10 for the first time, along with fellow internet billionaire Jeff Bezos of Amazon (at number 5).

Talking of India, the economic headwinds have taken their toll here too, with the number of billionaires at 84, six less than last year; their aggregate wealth, at $248.4 billion, is nearly $46 billion lower. Mukesh Ambani of Reliance Industries continues to lead the Indian presence (at rank 36), followed by pharma tycoon Dilip Shanghvi, Azim Premji, Shiv Nadar and Cyrus Poonawalla. Poonawalla’s Serum Institute of India clocked smart profits, translating into a wealth gain of $1.9 billion for him. In keeping with the global trend, internet entrepreneurs Sachin and Binny Bansal make their debut, thanks to their highly-valued ecommerce venture Flipkart.

It is now worth keeping a watch for next year’s list, which will demonstrate how well these billionaires negotiate the choppy waters.