Last December, I got my hands on a Fitbit Flex. It was black and cool and came with the reputation of having helped many Americans walk longer and better. I was optimistic—the long-elusive goal of 10,000 daily steps was just a wristband away. Four months on, the Flex lies on my bedside table. I use it whimsically these days; its novelty—much like its gloss—has worn off. 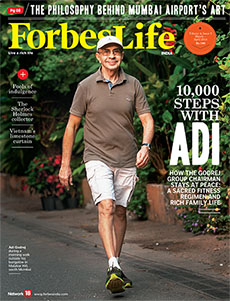 Evidently, it takes more than a gadget.

Walking is a sacred ritual for the believers. They have an almost-religious commitment to this seemingly vanilla activity: It is manifest on waterfronts and in neighbourhood parks around the world—streams of familiar faces flow in and out with hardly a break. Go to Mumbai’s Marine Drive or Delhi’s Lodhi Gardens or Bangalore’s Cubbon Park at the break of dawn—the thousands of footprints are testimony.

This most basic form of exercise is also the most recommended by doctors, therapists and your surprisingly sprightly great-uncle (“Forget zumba, bad for your knees. Just walk,” he will tell you). For the most part, a sweat-drenched T-shirt (though dry-fits have sorted out that particular damp squib) is endgame. But the restorative quality of the workout is of as much worth to the urban stressed. For instance, the hour-long time-out is a treasured part of Adi Godrej’s day.

The 71-year-old chairman of the Godrej Group is wary of any intrusion into his morning walks. At a time when ‘work-life balance’ is becoming mere shrink-prescribed jargon, the industrialist is walking the talk, as Forbes India managing editor Sourav Majumdar found out during an interview with him. Family time, particularly with his four grandchildren, includes holidays (safaris, mountains) and water sports (see pictures of Godrej on a jet ski).

We don’t quite know what they will do this summer, but here is an idea—actually, 10 of them. Consulting editor (photography) Madhu Kapparath has curated a magnificent array of swimming pools from across the world.

Staying with the indulge theme, Forbes India writer Shravan Bhat, recently back from a week in Vietnam, relives a breathtaking voyage along the country’s limestone curtain. We suspect he is plotting a return.

This time, before he boards the flight at Mumbai’s freshly-minted terminal, T2, he will get to experience another grand spectacle—thoughtfully selected artwork by a hundred artists and artisans from across the country. Contributor Anjali Thomas spoke with curator Rajeev Sethi about his process and philosophy in the creation of this gallery. Art for all, he responded.

Not to draw any delusionary comparisons but this, too, is a far humbler, smaller attempt of ‘something for all’. Stories of spunk, curations of cool and fodder for thought from an array of voices pepper the issue. As the tailpiece, Kapparath has sourced snapshots from ‘Bureaucratics’, a photographic labour of love by Jan Banning, for Beautiful People: The rank & file from eight countries with a life behind a desk in common. The babus will, unwittingly, silently, give you a moment’s pause. And leave you with the hint of a smile. As, hopefully, will this issue. Happy viewing, and reading!