Anita Shah came late to business, but it hasn’t taken long for her garden store Hybiscus to take root and blossom

Name: Anita Shah
Profile: Founder of Hybiscus, a company that provides garden accessories
She says: “I do not feel insecure about anything. I had done my research thoroughly. I was able to visualise the business.”

Do you know someone who is a graduate, did as well as anyone could while she was at college, but being a girl, was married at 22 partly because of the social norm that makes marriage the principal archway for entering adult life? 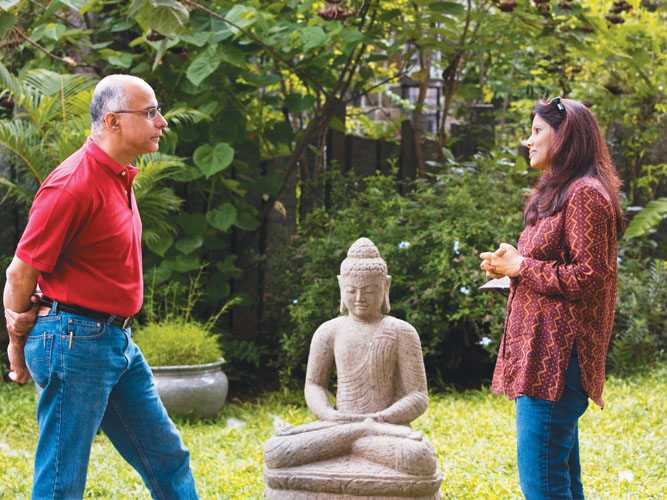 Image: Mallikarjun Katakol for Forbes India
Anita Shah, founder of garden store Hybiscus
So did Anita Shah. Married at 22, she went on with the flow of life, made her husband’s home in two continents and eventually returned to India. In the intervening years, they had two kids. She saw and supported her husband as the busy man who has to build his career; he on his part has been good to her and there hasn’t been anything really to miss. Well, almost.
Roll back to when she was 22. Apart from being ‘eligible’, she was also an intelligent individual who could have been anyone she professionally wanted to be. But at 22, she did not. At 36, she wished she had.
This fortnight, we have Anita Shah in the Zen Garden, once an epitome of all that we have just said. Today, she is quite another story. A small business owner for the last four years, she employs six people, carries an inventory worth Rs. 60 lakh to Rs. 70 lakh at any time and she pays the government an estimated Rs. 35 lakh a year in customs, VAT and other taxes.
“I was born the eldest of three daughters in Duisburg in Germany and then moved to India as a two-year-old. I went to the Aurobindo Memorial School in Bangalore and after that studied commerce. Then I got married at 22 and moved to the US with my husband. In time, the two babies came and I got swept into being wife, friend and mother. Amidst all this, there was one thing that had stayed with me from my early days — my love for gardening. So, when we were in New Jersey, I loved going to garden stores and could spend hours browsing. It is there that I developed a fascination for pots, urns and artifacts that make a garden beautiful. I was drawn to the idea of building a business around them.
“Every time I would go to a garden store, I would stop at the pots and ceramic urn displays and I would turn the pots and urns and check where they were made. Who made them?
“Where did that lead you to?” I ask.
“I had no idea about how to go about converting what I loved to a business. I started going to trade exhibitions. They are a great place to learn from, to network.
“I realised that most of the higher-end ceramic pots and urns came from the Far East. I researched some more. I used the Internet to track down exporters of these items in countries like Malaysia. Once I found them, I asked a friend to join me and off we went to Malaysia. There I met several exporters and from them I found out who were the actual manufacturers and then we went down to find the points of origin. The next step was to make a deal with a consolidator and I found one by speaking to people in the trade.”
So over two years, Anita Shah tracked down every single point in the supply chain; she went from Kuala Lumpur to Ho Chi Minh City. Then she came back to Bangalore where the family had relocated in the meantime and looked around for a place to start her business. One day, she saw a large garden house off Cunningham Road. It had cluster boutiques and there was a large tract of colonial-style garden. Anita convinced the landlord to rent her the garden and then she borrowed Rs. 30 lakh at 16 percent interest to order her first container of ceramic pots and urns under the name “Hybiscus”.
From then on, Anita Shah was no longer wife and mother first. She became a tax payer to the exchequer, an entrepreneur, an employer and generator of GDP.
In the last four years, Hybiscus has nicely taken roots. Its foliage has grown well and today, it is in bloom.
Was there ever a feeling of discomfort when you started the business?” I ask.
“I am an innovative, creative person. I do not feel insecure about anything. I had done my research thoroughly. I was able to visualise the business when I saw the garden property. I could see how it would transform when the display of ceramic pots, urns, other artifacts would dot the place. But the one thing I had not imagined was going to the Customs office to get the first container released. I was uncomfortable; they seemed uncomfortable to have me, a woman, around. The clearing agent then told me not to come in future.”
“How did you go about finding customers?”
“I sent emails to people I knew, I sent out bulk SMS announcements, I designed coffee mornings for home customers so that they could come, experience the product and then of course it became word of mouth. This year, we will end up doing close to a crore in sales. There are newer products I am looking at, like granite fountains under a lakh and also thinking seriously about the store-in-store concept for places outside of Bangalore”.
“In all this, how did the husband and the two sons take it? Did they not feel neglected as Hybiscus started growing on you?”
“No, to the contrary, they actually saw a happier me, a more complete me and in the end, it matters a lot that each member of the family bring back a sense of positive energy into our collective existence.”