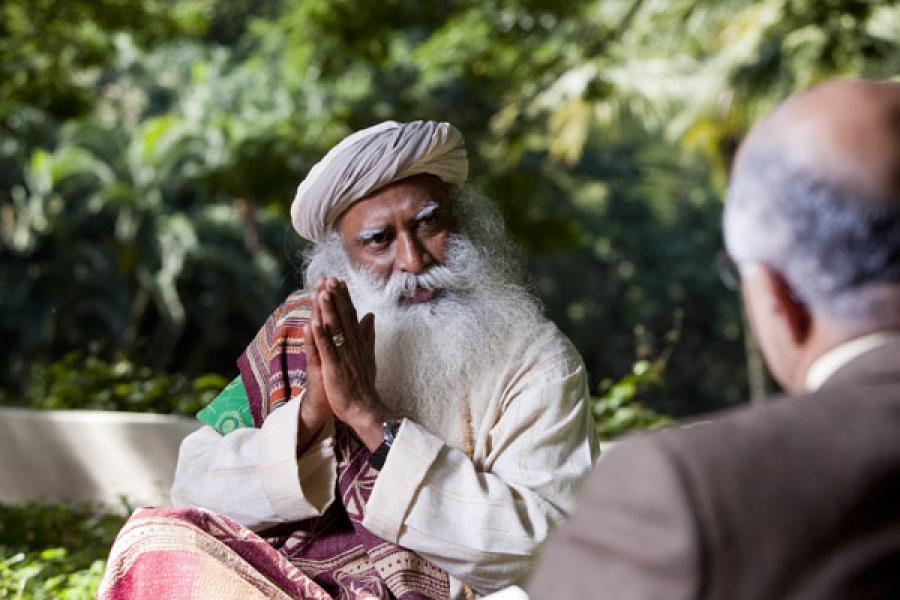 NAME: Jaggi Vasudev
CALLING: Mystic and founder of Isha Foundation
HE SAYS: Moments of extreme logic are moments of suicide; people commit suicide in instalments. Extremely logical people can barely smile or laugh. The more logical they get, the less alive they become.


I had no idea who he was until Tuck School professor Vijay Govindarajan told me about him a few years ago. It was in the context of a learning trip to India for the executive MBA students he shepherded every winter. While explaining to me the structure of the programme, he mentioned a session the students always had with a mystic named Jaggi Vasudev. “The Guru who rides a BMW motorcycle and plays golf,” Vijay told me. Over the years, Jaggi Vasudev’s free-wheeling sessions with returning batches of hard-nosed American executives have become one of the highpoints of the learning programme.

I was intrigued when I heard of him. And I waited until one day Jaggi Vasudev came visiting as I was leaning over the hedge and wondering about the very nature of intelligence. So when he stepped in, I asked him if intelligence is necessarily a good thing.

“I think one distinction we need to make is between intelligence and just intellect,” he says. “When we say intelligence, we often are referring to intellect; to the logical dimension of the intellect. In today’s world, because of the nature of the education that most people receive, unless you are logically correct, it is not recognised as intelligence. If I say something right but logically incorrect, you will drown within yourself. If I say it a second time, you will flinch outwardly. Third time if I say it, you will want to get up and leave: Because illogic as intelligence is unacceptable today. It is because of the nature of the education that most people have received today. Logic is useful to sort material things out. As an example, if you want to know whether to enter this room through the open doorway or through the wall, you need logic. Have you heard the story of Isaac Newton and the cats?”

I am just a gardener. I have never heard that one. So he tells me the story.

“Isaac Newton had a cat,” he says. “When he used to be in the lab, the cat would go out and after he left for the day, it needed to go back in and sleep inside. So Newton cut a hole in the door. Later on, the cat had a litter of kittens. So, he made a smaller hole for the kittens to go in and out, not thinking for a moment that they could also go through the existing hole. His mind was somewhere else totally. He did not realise the illogic in his act.”
I want to know more about illogic.

“Intelligence need not be locked up in one’s logical dimension. In many ways, what is considered illogical turns out to be the smarter thing to do. We have many examples of people in the world of business who succeed because they do not heed so-called logic and go on to build super successful business models. Like Google. But when people start worshipping illogic they also go to ruin. If logic is stabilised, it can be refined. Even crude logic can be refined at different levels. So the whole spiritual process is about refining your logic. At the finest point you realise that even if you refine your logic further, it does not scale any more. At that point, you open up a different level of intelligence to seek another dimension.”

So, I ask, life is not just logic? “The life process is far larger,” he replies. “The logic of life is such that if you logically go about your life, without thinking about the beautiful things in your life and not look at the flowers in the garden, your child’s pretty face, but just get up, get ready, eat, go to work, sleep and then repeat the same routine for the next 50 years, you begin to wonder if it is worth doing.

“Moments of extreme logic are moments of suicide; people commit suicide in instalments. Extremely logical people can barely smile or laugh. The more logical they get, the less alive they become. These people, in the name of becoming logical, become torturous human beings. If they are failures, they are hugely stressed. If they are successful, their head is cracking. Successful people on this planet are actually suffering much more than people who have not succeeded in their lives. That is a misfortune because the reason every human being seeks success is for the dream of wellbeing. But when he gets there, he suffers. That doesn’t sound logical. But nobody seems to be looking at it that way; that is why I said logic has to refine itself.”

Unlike a gardener, a mystic is able to see the future. So now, I ask him to tell me about the rains; about what lies ahead for all of us.

“Power is a privilege that some human beings get. So when such a privilege and responsibility is placed in your hands, every action and every thought that it generates, every emotion that you can form, can touch and transform millions of lives. I think the kind of thought you generate, the action that comes out of you, has to be looked at from that perspective.”

A gardener goes nowhere but a mystic must move on. But before he leaves, I have a question for him. How, I want to know, does one build a sense of purpose?

Tweets by @forbes_india
Being the Boss
Appraisal: Jaipur Literature Festival 2011