If I Find Hidden Treasure, Is It Mine? 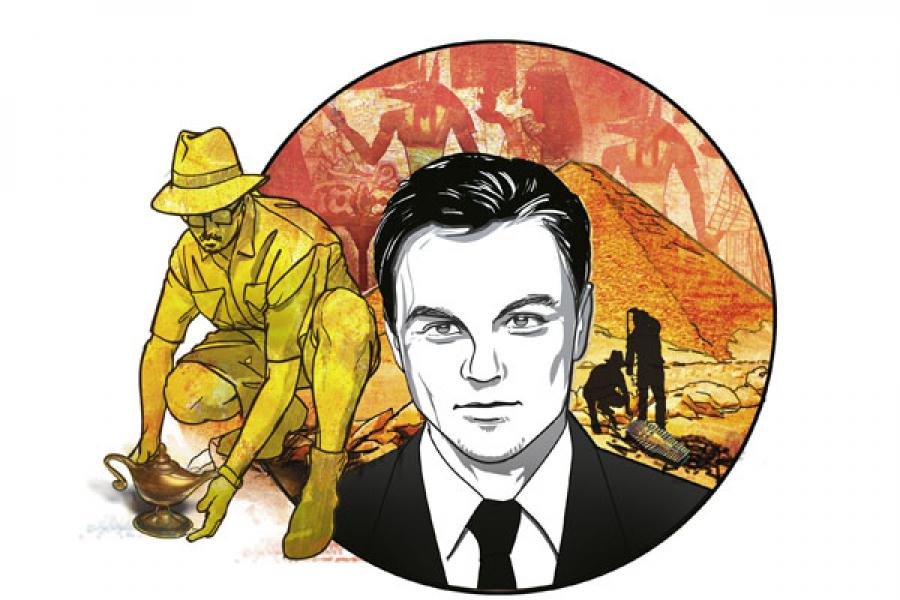 There were reports that dinosaur eggs were found in Karnataka, but a few days after the story came out, nothing much was reported. Is it true?
There was something like that reported, but no scientist has verified it so far. So no scientifically ratified discovery has been made.

Where have they found dinosaur bones in India?
Dinosaur eggs have been found in many places in India. Tiruchirappalli in Tamil Nadu and Khera in Gujarat are some of the sites where a large number of dinosaur fossils have been found; some, as old as 65 million years. In fact, in some places dinosaur eggs are believed to be Shiva Lingas and are worshipped.

Have there been any fresh clues about why they were destroyed?
Rapid climate change seems to be the cause for their extinction.

What excites you about your job?
The promise of discovering new things is always exciting. This is a field-oriented subject, and data is always limited. Every new pot shell we discover, every bit that can lead to something new leads me to feel that I am doing my duty and contributing to the subject.

How do you motivate yourself on a day where you search all day and come up with nothing?
Well that is part of the job. We are mentally prepared for that and I even tell my students that the main requirement is patience.

A good example of this is Howard Carter who found tomb of Tutankhamen just as he was about to give up on a long fruitless search.

What is the career graph for someone who would like to become an archaeologist in India?
There are a number of organisations that now hire archaeologists. The Archaeological Survey of India has branches all over the country and is always in need of candidates. Every state has a department of archaeology. Museums and the tourism department are other places to work. Universities have archaeology departments where professors are needed.

Besides these there are also UGC grants that are given for research papers. So it is possible to make a decent living from the subject.

Is there a dearth of people choosing this profession?
Yes. And the reason is a lack of awareness. Most people are not aware of the importance of this science. To an extent, we are also at fault. It is our job to also make ourselves heard and publicise the importance of this field and the place it must have in the life of any successful nation. We need to explain to people the contribution of archaeology to the thinking of the society we live in. A country which does not understand its past can have no future.

We are also making no effort to generate revenue through our history. Countries like Greece, Italy and Egypt should be our examples. The remnants of our history can be found in every part of the country. The government must rope in the people to help preserve and monetise these sites.

But it is getting better.

What are the most unusual things you have found digging?
Just three examples: A site in Mewad Rajasthan, a Harappan settlement, where the original impression was that outsiders had come and settled here. But we found settlements from 3500 BC which showed that there were natives that had been settled here much before. These were complete Harappan instances or urbanisation.

A site in Farmana in Haryana, where we discovered one of the biggest Harappan cemeteries, with around 70 burials. A farmer ploughing his land alerted us that he was finding fragments of similar-looking pottery, and that is how we stumbled on to the site.

What are the most exciting future areas for excavation?
There are smaller sites that are not sufficiently explored. These are often sites of Harappan villages which are neglected. All that is talked about are Harappan cities.

The Stone Age is not as glamorous as Harappa. These need to be explored further. The western part of the country shows a gap in our knowledge after the decline of the Harappan civilisation. This gap of 500-600 years needs to be explored.

Are there any possibilities of Machu Picchu / Angkor Wat type discoveries being made in India?
There are lots of areas in the Eastern and North-Eastern parts of the country which have not been studied properly. There is always a possibility of some major discovery there.

Do archaeologists' marriages suffer? (Those who marry out of the profession, that is.)
Oh yes. My wife complains constantly, as do most of the spouses of my colleagues that we are not at home often. But at some level they understand what we do and are proud of us.

How does one become an archaeologist?
Besides Deccan College, Pune, Allahabad and Baroda are good places. But the best training in archaeology is provided by ASI. They have a post-graduate course which has place for just about 15 students which gives a through training in the subject.

What's the oldest evidence of humans in the subcontinent?
Riwat in Pakistan and Isampur in Karnataka are older than 1.5 million years. This would be the beginning of the Stone Age.

If I find hidden treasure beneath my house, is it mine?
No chance! According to the The Ancient Monuments and Archaeological Sites and Remains Act 1958 anything that is found belongs to the government.

What are the all time top three archaeological finds from India — apart from Mohenjo-daro and Harappa?
Lahurdewa, near Gorakhpur on the Ganga Basin, discovered by the Uttar Pradesh archaeology department. It points to the possibility that there was rice cultivation in India long before the Chinese imported it to India, as was formerly believed.

Dhola Veera, in Kutch, Gujarat, is a Harappan site much more significant than Mohenjo-daro, according to me. It is not as big as some of the other sites, but this is an entire city made in stone. It has an 18-metre fortification wall and it has water management techniques that are unparalleled. The area was as arid as it is today, but there were two large streams that were prone to flash floods. The city was divided into three parts, with each having its own tanks and water from these floods were diverted into the tanks with underground pipes.

Kosambi near Allahabad is another significant site which showcases the prosperity of the Gupta period.

Was there a land connection between India and Sri Lanka ever?
Yes, probably 60,000 years before today. But there does not appear to be much cultural movement between Sri Lanka and South India.

In spite of India being quite in sea trade, how come we’ve never heard of any sunken ships filled with gold being discovered off our coasts?
That is mainly because our marine archaeology department is very nascent. There are even instances where sunken ships have been found but not documented. The National Institute of Oceanography, Goa has been taking some interest off late. Recently, a sunken Portuguese ship has been found off the coast of Goa, which had ivory and gold.

Which are the toughest heritage sites to maintain?
Rakhi garhi is among the largest Harappan sites found and among the most difficult to maintain. It is very close to modern civilisation and there is a lot of encroachment on the site; and it is made of sun-dried bricks, which are hard to preserve. And salt formation is a huge problem in the area; the salt eats away at the mud structures. Sometimes after excavating a site, we fill it up again because the government does not really have the resources to maintain all sites, and filling it up is the best way to prevent it from being destroyed.

What are the criteria by which structures are graded 1, 2 or 3 structures?
If a structure or a site contributes substantially to throw light on the history of the country, then it is Grade 1; if it contributes to a region it is Grade 2; and locality is Grade 3.

Do you ever fear ghosts?
(Laughs) No never! Once at a site we excavated some skeletons, and I slept with one of them under my bed!