Wilfried Aulbur: Step On The Gas

The outgoing MD&CEO of Mercedes Benz India says owning a Mercedes is part of the psyche of Indian performers, but the market for luxury cars is still very small 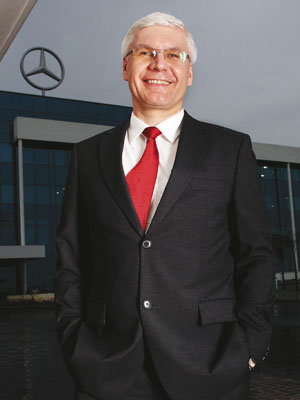 Wilfried Aulbur
Age: 45
Designation: Outgoing Managing Director and CEO, Mercedes Benz India.
Education: Undergraduate and graduate studies in Europe and the US, Ph.D in Physics from the Ohio State University, Post-doctoral researcher at the University of California and the Ohio State University in the areas of semiconductors, computational material science and solid state physics.
Hobbies: Likes Indian art, watching Bollywood movies and travelling to explore India.


How has the concept of ‘luxury’ evolved in India?
In the mid-1990s, the culture in India was very much dominated by a socialist outlook and luxury was looked at with some suspicion. Buying a Mercedes often entailed a visit from your friendly IT officer as well as a phone call from the neighbourhood goon. So you had to have quite a determination to celebrate your success by buying a Mercedes.

In the early 2000s India re-branded itself and became the country of brains and IT. Confidence in capabilities grew and people realised that they were doing the same kind of work that their peers were doing in other parts of the world. As a consequence, Indians aspired to the same kind of perks and owning a Mercedes is a very important part of these perks, i.e., luxury car consumption became more acceptable.

In the latter part of the 2000s, business success of Indian ventures, rising incomes, as well as stock and real estate markets that are performing well, easily available financing, etc. created an environment in which owning a Mercedes became part of the psyche of many Indian performers who wanted to celebrate the fact that they have made a difference in their lives as well as the lives of those around them. This led to a very strong growth in the luxury car segment. Going forward, this growth trend will continue.

Compared with other mature and emerging markets, luxury vehicle penetration in India is still very low (e.g., less than 1 percent vs. close to 8 percent in China).

You moved to India in 2000. What have been your key learnings in this country over all these years?
The most important thing is to realise that people in India and elsewhere are driven by pretty much the same things: The desire to learn and grow, to make a contribution as part of an empowered team, and to make a difference for themselves and others. Enabling an environment that supports these aspirations will allow you to move mountains.

However, there are also areas in which global companies can learn from successful Indian performers, e.g., in the areas of frugal engineering, innovative business concepts that rely more on readily available technology and integrate suppliers much tighter in the overall business model by linking them successfully to the overall project success, etc.

What have been the challenges of working in India?
One of them [challenges] would be the geographic reach of the country.

That, in combination with customer events, dealer visits, supplier/partner interactions, etc. basically means that you are constantly on the move.

Luckily, I enjoy travelling in India as well as constant interaction with people from across the country.

Tweets by @forbes_india
All Aboard!
If I Find Hidden Treasure, Is It Mine?