Tarun Das: There are Many Satyams Around

Tarun Das
Title: Chief mentor at Confederation of Indian Industry till November 2009; now President, Aspen Institute of India.
Age: 70
Career: Took charge at CII in 1963, when it was a fringe body, and turned it into India’s apex industry association with 8,000 members.
Education: Graduate of economics and commerce from Kolkata University and Manchester University.
Interests: Golf, football and jazz.

After five decades at CII, what next?
I am working full time on Aspen Institute of India. [Now] I have no power but enormous goodwill. I want to see a different kind of corporate India in my lifetime. Can I help to integrate business and society and create sustainable business? I want to see. 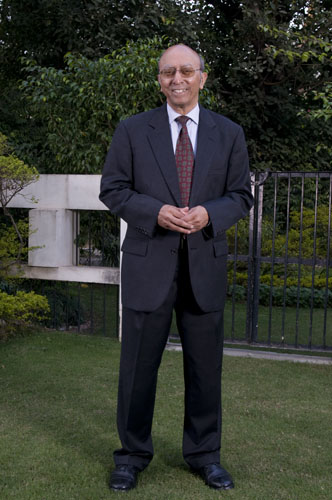 Image: Amit Verma
Why would corporate leaders care about value-based leadership and think beyond making money?
If they want to be respected by society, they have to conduct themselves accordingly. I am very concerned about things like Mukesh Ambani and his expensive sky-scrapers. I feel if you aren’t sensitive about poverty in India — the have-nots will march to Delhi and you will not be safe behind your high walls. Remember history and what happened in France? Why do you think it can’t happen to us?
You interact with Indian business leaders very closely. What do they worry about the most?
Their biggest worry is to get things done vis-à-vis the government. One aspect of this is corruption — both in decision making and implementation. Another issue they often talk about is scarce people. Yes even in these times of economic downturn and layoffs. Today, money is available, material is available. It’s the third M — manager — which is scarce.
What do you think about corporate governance in Indian firms?
There are many Satyams around. Just that they have not been caught. How have the jute and tea industry been killed [other than] by promoters siphoning off money?
Satyam scandal has been a shock for many. Companies have realised that this can happen again — and to anyone. Going to jail — for them to be in jail is the ultimate humiliation. Satyam has had a positive fallout. They don’t want to end up in jail. Businessmen want respect more than anything else.

Under your leadership, CII became the apex industry association body. Take us through the journey and the challenges.
We managed to overcome the individual differences and conflicts to create a body that stood for broader cause. There were times when members asked things like if we should admit MNCs whose interests would be in conflict with the Indian promoters. Our attitude was — the conflicts will be there and we will manage them. So many times I have had CII members deeply divided on a specific issue and during discussions things would get so heated that they would threaten to resign if we didn’t listen. We would somehow cool the tempers, call off meetings and tell them let’s talk offline and slowly build a consensus around it.

What’s the big change you see in the way CII — an industry lobby — functions?
In the past, there was no trust between the industry and the government. Today, we are integrated. The whole process is more transparent.
What’s your view on how the government functions and the business-politics nexus?
There are still sectors which lack transparency. There are too many approvals to be sought — and every approval can potentially be corrupting. I feel if we can move to state funding of elections, it will remove a very big cancer that politics-business nexus has created. I will go to the extent of saying raise industry tax rates by 2 percent, give that money for election funding. That will clean up the process quite a bit.