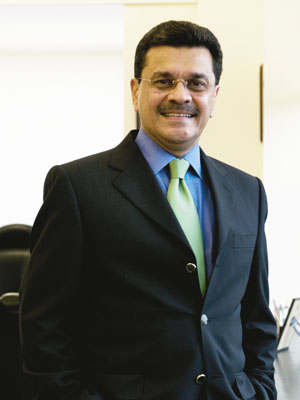 TRAI has recently said that the entire nation's cable TV networks should be digitized by Dec 2013, how does that affect your business?
Quite honestly that’s just a recommendation. Government of India has yet to buy on it. The Information & Broadcast ministry had earlier set the date for 2017. But yes, Cable TV digitization in this country is inevitable. For a cable operation to reach rural India, head-ends first need to be set up, economically viable clusters of subscribers need to be there to justify the cost of head-ends. To reach those subscribers fibre cable needs to be laid down to the homes. So the marginal cost of setting up the incremental connection of cable is very high whereas in DTH since its satellite model it beams down the signal irrespective of the location being remotest corner of the country. Cost for us is exactly the same – be it on a mountain of the bottom of a lake.

With digitisation, the current cable business model shall collapse at its current pricing. Because with digitisation you have to declare your exact numbers, pay government taxes, pay fair share to the broadcasters and MSO (multi-system operators). And with $3 per month pricing today, cable is artificially under-priced in India, its sustaining only due to under-declaration of subscriber numbers. It needs to be understood that this single anomaly of 90 million cable homes in India of which only 20% are declared has distorted the entire pay-TV industry. It’s a complete perversion of the system and not sustainable. For a viable business, the ethics of it has to work and economics of it has to be right.

There are seven DTH players today, ARPUs are low; taxation, you claim, is high for this industry. What is the way ahead for it to make profits?
On the licence fee, TDSAT [Telecom Disputes Settlement And Appellate Tribunal] has now ruled that it should be levied at adjusted gross revenues and not gross revenues, removing cost of content, hardware and taxes already paid. Similarly, TRAI has recommended that the percentage should be reduced to 6 percent from the current 10 percent, so hopefully the government will look into it and we shall have a level playing field. The second piece of taxation relief in the near future would be from the state governments. We’ve proposed to the committee handling GST that entertainment tax should be rolled into the GST as one single tax.

Another issue is whether there is room for so many DTH players. Well, if you ask me, my answer is ‘No’. I think this country can take only three. I think after having spent thousands of crores as investment in this business since the last few years, the time has now come that shareholders will begin to ask, how much longer will it take and when shall we get the returns? So that shall lead to some pricing correction and the initial serious discounting we all offered to get a foot-hold in the industry will stop. This shall also move up the ARPUs.

Do you believe consolidation in DTH industry will happen soon?
Yes, I believe it will happen, much like in the mobile phone industry, but since the players here are well entrenched, have deep pockets and king-size egos, it will take a bit longer. But at the same time, mind you, these players are very savvy and beyond a point if they think that this is just going to be a huge loss then they are not going to stay in it. That’s a fact.

What are your views on the recent regulation that states you should give a la carte choice on TV channels?
One of the issues with the regulation system in this country is we have a socialistic history and we have bureaucrats who are idealists. Nowhere in the word is it mandated that a consumer can ask for a 100 percent a la carte choice when you have more than 250 channels. And in India we have channels in 15 languages present in five or six genres, so imagine the number of options it multiplies into and the complexity it increases for our call centre to manage. But guess what, our regulator spends two years on the issue and eventually says this is the way it will be. So there is much irrationality in the system but in any new industry this will happen and you’ve got to learn the Indian rope trick to live with it, keep debating, keep talking to the regulator and reason it out.

When DTH came, broadcasters assumed there will be relief from the cable mafia, but it turns out DTH has its own carriage fee demand…
I think it’s a bit exaggerated. The hard fact is that DTH has brought in a completely new revenue stream for the broadcaster. They earlier collected subscriber fees from cable industry which continues and has only grown in the last few years; now they also get money from us. So you earn more money today but you also continue to moan that now DTH guys are also asking for carriage fees?

Let me tell you why the DTH players are asking for carriage or content delivery fees. With the current technology we can only beam a fixed number of channels, so if there is a new channel to be launched then the broadcaster needs to either prove that it will get a substantially high rating and the consumer wants it or pay a charge to give them access to our 5.5 million premium homes in the country. It’s perfectly legitimate. And for a change we take all payments by cheque, so it’s all legal. So from the broadcaster these are crocodile tears, I’m sorry to say this. The fact of life is they have never had it so good.

You’ll retire soon, any thoughts on what will be your next step?
I think the concept of chronological retirement is archaic. That time is gone. People should productively contribute as long as they can, in a role which makes sense for everybody.

Tweets by @forbes_india
The Value of a Long View
What’s a Hacker’s Biggest Fear?