Renowned management thinker CK Prahalad has been watching Devi Shetty for the last six years now. Back then Narayana Hrudyalaya was still a relatively small facility. But even then Prahalad believed that the model held immense promise. “My job has always been to look at models that are different, models that are scalable. And it was clear to me, even at that time, while talking to him that this model is going to grow and he is going to be able to execute it because he is not only a very good visionary on what the world can be, but he is extremely good at making it happen,” says Prahalad. In 2004, Prahalad wrote about Shetty’s unique hospital model in his bestseller The Fortune at the Bottom of the Pyramid. In a free-wheeling interview, Prahalad explains why Devi Shetty’s model of healthcare stands out as unique. Excerpts:

Q. You have been an observer of Narayana Hrudyalaya for a long time now. What do you think makes this model unique?
I think there are 3-4 distinct features that define Devi Shetty’s ability to create something fundamentally different. One, I think he has a point of view on how to create world-class healthcare facilities for the poorest people of the world. Therefore, his entire healthcare model is based on reducing cost without sacrificing world-class quality. Essentially, the mortality rate in Narayana Hrudyalaya is much lower than in New York State for similar kinds of heart disease. So the first principle is having a deep conviction that you have to bring world-class (quality) at affordable prices to the poorest people in the world so that you get for the first time, the ability to provide world-class (healthcare). I think that’s the motivating principle. The second thing I think is the willingness to implement entirely different work processes. For example, somebody reading the echocardiogram (in Narayana Hrudyalaya) is someone who has just done high-school graduation or who has done just the first year of college.

In other words, it’s an orientation towards skill development rather than credentials. So you don’t have to be an MD. In other words, because of the large volumes of people, he is able to attract highly-specialised people who are oriented towards world-class skills, not necessarily world-class credentials. The third is the ability to mobilize very large human resources as well as financial resources. Because if you see how he is building enormous facilities, especially his Health City idea, that has 2-3 principles involved. One I think is enormous ability to leverage capital. So you have highly-centrallised specialized services like MRI, CAT scans, IT and so on. Second, he has highly specialized practitioners of not only cardiac care, but neurology, orthopaedics, etc. But in every one of them he has sufficient scale so that he can have people who specialize. So it’s not people who are general practitioners of surgery but who also do cardiac care plus something else, plus something else. Here the cardiac care folks do only cardiac care, and within that, only certain kinds of cardiac care. 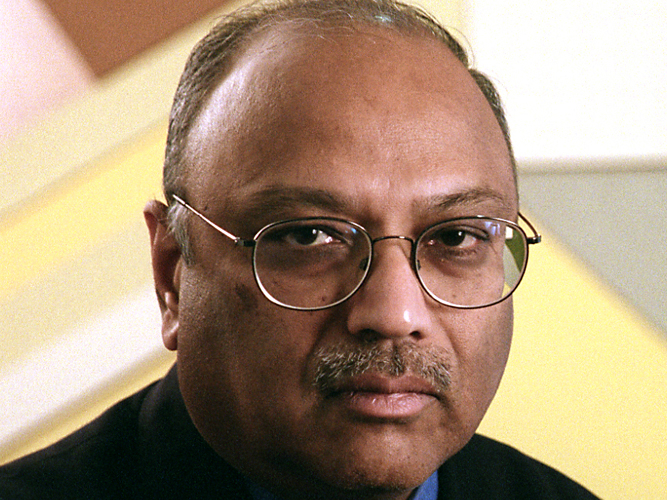 Renowned management thinker CK Prahalad has been watching Devi Shetty for the last six years now
But you cannot do that without enormous scale which I think what he has been able to generate.
Finally, I think (he has) the ability to look at the opportunity very differently. Rather than accept Western practices because they want to develop better than Western quality of medicine, so he has been able to change these practices. Those would be the major lessons to be learnt: that you can combine world-class quality, affordability and scale simultaneously. Therefore, it creates a fundamentally different economic model.
He gets large scale, economies of scale, creates enormous efficiencies in the supply chain – whether it is insurance for poor people through Yeshasvini, whether it is buying of sutures or buying CAT scanners and MRIs. He applies the same principles as Wal-Mart does and thus, makes it affordable to ordinary people.

Q. Devi Shetty has pretty aggressive expansion plans. What kind of challenges do you think he may face in scaling up his model?
The model is scalable. I think the real challenge is going to be about how do you get the same quality and that means enormous commitment to training and recruitment and making sure that quality does not suffer in the process of expansion. That is no different from a Wal-Mart or McDonalds. When they have to open more stores they have to do the same.

Q. In your conversations with Dr Shetty, how prepared do you think he is for these challenges?
Devi Shetty is very aware of what the issues are and what needs to be done. I believe he is extremely well prepared to deal with those issues. He understands them and knows what to do about them.

Q. What about Devi Shetty as a person? What’s your sense of him?
He is a unique combination of a visionary for healthcare in poor countries like India, extremely good manager because he is very astute. He understands the numbers, he understands how the financials work. And added to it is his ability to motivate people. So it’s a very interesting combination of vision, strategic understanding, financial acumen and inspirational leadership. And more importantly, he still practices his art.

Q. In the years that you have known him have you seen him change his model, tweak it?
I think what has changed in the last six years is his desire to scale his model rapidly. Also, Yeshasvini which is the insurance part, which is a way of making sure that people can afford healthcare.

Q. Talking of Yeshasvini, what really makes the health insurance model viable?
What makes it viable is the extraordinarily large numbers it is able to pull people from villages. So what he is saying is that I want to go and insure everybody in the village. So village after village there is 100% coverage. So over a period of time, you have a deep understanding of what the diseases entities are, how do they function, what are the vulnerabilities to the scheme. So I think it is understanding in-depth what the issues are and able to manage it in a sensible fashion.

Q. What do you think this model holds in terms of lessons for others? Is it a model that is unique to India? Can it be replicated?
The model can be replicated elsewhere in the world but that does not mean somebody can come and copy it very easily because there is a lot of competence built into making the model tick. I mean competence of the entire system. Its like saying everybody can go and see how McDonalds works therefore, everybody should be able to replicate it. The reason why they cannot is that there is a lot of detailed knowledge involved in building the whole system. That cannot be replicated easily. The entire way the surgery is done, for instance: in most parts of the world the orchestration of surgery is done by one person, but here the surgeon does his/her work – the entire orchestration is embedded in systems and training and everybody doing their little bit in synchronization. That is a very, very different model. Think about applying TQM principles to surgery.

I think there is a lot that can be learnt by business people to understand how to combine strategic vision, financial acumen and inspirational leadership. And Devi Shetty is also the best salesman for his ideas – he is extremely articulate and because he has done it, he carries enormous credibility.