Deep Kalra: Making His Own Trip

Entrepreneurial journeys don’t come with advance reservations. You aren’t ready to start unless you can give up the comfort of the familiar 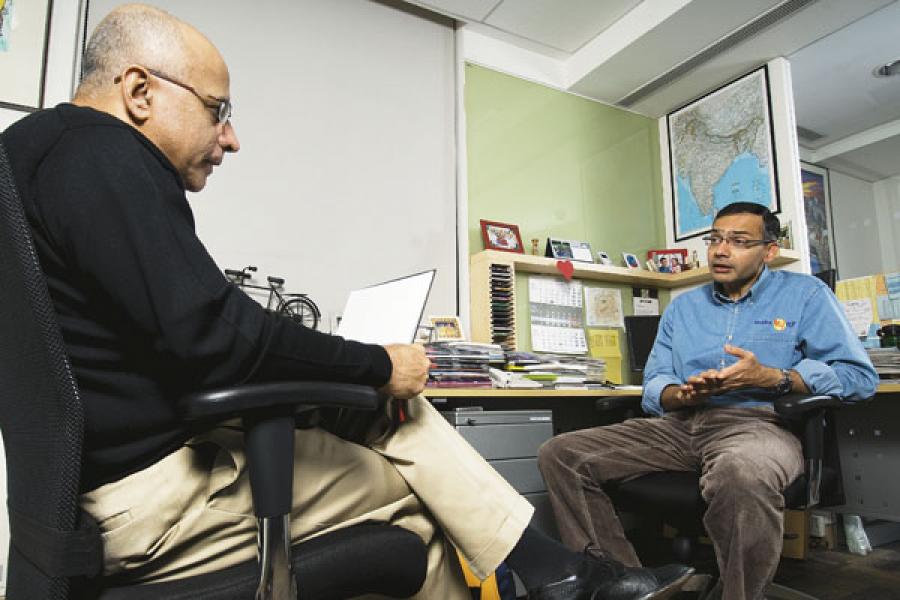 Name: Deep Kalra
Profile: Founder, Makemytrip.com, a company that today hires 670 people and will do Rs. 210 crore in revenues (commissions) in the year ending March 2010.

He Says
First work for a professional. That way, you know the value of someone who works for you.
Hire people better than you. If your marketing, ops and finance guys are not better than you, why are you hiring them?

For someone with no real alternative livelihood, entrepreneurship might come easy. But for the better off, it is much more difficult to venture into the unknown. As a man who started his career as the quintessential management graduate chasing the multinational lure, Deep Kalra was quite settled, except that he couldn’t ignore his urge to start on his own. He chucked his salaried career and set up shop in the most uncertain of domains — the World Wide Web in the midst of the dotcom boom. It is in his journey of the last decade as the founder of Makemytrip.com that we glean insights this fortnight into the three essentials of business: Surrounding yourself with people better than you, raising the right amount of money from the right people and the importance of being humble.

For Kalra, who was born in Hyderabad and grew up in Delhi and Ahmedabad, the path to a corporate career through one of the Indian Institutes of Management sounded natural. “Post my graduation, I applied for the IIMs and XLRI. It was a nice kick to get calls from all the IIMs and XLRI. But more importantly was the kick when I went to IIM, Ahmedabad, where I met some of the brightest minds. It is a very humbling experience,” he says. Perhaps it was here that he learned to tell high-quality talent when he sees it.
He went on to work with ABN Amro Bank but realised that he wasn’t cut out to be a banker. He decided to do something else. An important breakthrough that would eventually lead him to become an entrepreneur came his way soon. “A very dear friend of mine told me about a client who was the largest manufacturer of bowling alleys in the world! I met them and learnt it was an intrapreneurial job. I went about doing deals with real estate owners to set up bowling alleys! We did a couple of world-class projects. But there was very little to learn. I was a little scared — I needed to be around with bigger professionals from whom I could gain by learning through observation. That opportunity arrived in 1999 when I got an offer from GE Capital as VP - business development for their retail business. It was a very exciting job, but I lasted only 16 months in GE because the intrapreneural stint had stirred the need to be on my own.” Around this time, Kalra met Internet entrepreneurs like Sanjeev Bhikchandani and Ajit Balakrishnan and decided he too wanted a piece of the online action.

What were the signs that you were an entrepreneur inside?
There is an entrepreneur in everyone. Most people would like to work for themselves given a situation where you earn the same amount of money. I think the two big trigger points in me were meeting with Sanjeev Bhikchandani and Ajit Balakrishnan. I was trying to sell to them. With Sanjeev, there was a huge connect. He is from Delhi, he studied at Columbus and IIM. With Ajit, it was even a bigger connect. He [is] a great visionary. He founded Rediff.com in 1996. It was very inspiring to meet up with these two people.

Tell me about how you set up your team.
I hired a guy through a phone call when he was on a train. He was initially hired as a manager and now he is a co-founder and the COO of the company. Very unusual guy — his name is Keyur Joshi. The other would be a very recent hire as the SVP - technology.  His name is Mukesh. He is an IIT ranker. He comes to work in T-shirts and shorts. He obliges me by keeping his trousers in the office which he may put on if formal appearance is sometimes necessary, the way someone keeps a jacket and a tie on a hanger in the office.
I found that really hiring people better than you is critical. If your marketing, ops and finance guys are not better than you, then why are you hiring them? Another thing is that all your people who think of you as the last word are your worst enemies. So, we have guys who pounce on me with logic and disagree; they are my best friends. Surround yourself with people who call a spade a spade.  You should have the humility in you to say ‘you are right’!
I would advise would-be entrepreneurs that you must first work for a professional and then turn into a businessman, [the] reason being you get to know the value of someone who works for you. You learn to value professionals. That also changes the way you treat others.

Your key lessons about fund raising?
Maintain only one set of accounts. The projections that I give to my potential investor are the ones that I truly believe we can achieve. The second is about choosing the investor right. The individual who sits on your board has to be a decent human being. If you are not comfortable with someone, do not engage. The guy who is on your board should be able to call the shots. He should then be a partner and if he is not, then you have a problem.  Choose quick decision makers. I have not gone for brands while choosing investors.  Brand name in investors is irrelevant. One more thing about funding: Take as little money as possible in the beginning. But keep enough [of a] cushion. Take 50 percent more than you think is critical.

Where do you get your modesty from?
I think it is the upbringing. The minute you start thinking you are cool and something big, that’s the end.

What do you get beaten up at home for?
For coming late. I am a workaholic.
Subroto Bagchi is co-founder & gardener, MindTree and a best-selling author. His brief:  Every fortnight, exchange tales of the road with successful entrepreneurs