Entertainment: The show will go on

As entertainment reaches an inflection point with OTT platforms, the future promises to be a joyride for people seeking quality content and immersive experiences

Illustration by Chaitanya Dinesh Surpur
Acclaimed filmmaker Steven Spielberg created a flutter earlier this year when he suggested that films streamed on online platforms like Netflix should be barred from Oscar nominations. A showdown was averted after the Academy of Motion Pictures Arts and Sciences said it won’t change eligibility rules and Spielberg clarified his stand. “I want people to find their entertainment in any form or fashion that suits them… However, I want the theatrical experience to remain relevant in our culture,” said the three-time Academy Award winner. The trepidation that Spielberg—maker of critically successful films like Jurassic Park, Saving Private Ryan and Schindler’s List—and probably some other directors may be experiencing is understandable. The entertainment landscape has changed drastically over the years. From single-television screens and cable TV to multiplexes and now an avalanche of over-the-top (OTT) platforms, consuming content has become easier. The future holds even greater promise when one considers that the market for OTT content in India will reach $5 billion by 2023, from $0.5 billion in 2018, according to a November 2018 report by global management consulting firm Boston Consulting Group. As the propensity of people to devour movies/shows on the go becomes commonplace, theatres could come up with immersive experiences to draw in visitors who would expect value for their money. Filmmaker Jayprad Desai experienced first-hand what the future could hold. At the 007 Elements museum in Sölden, Austria, he walked through a documentary on dolphins where the story unfolded with every step that he took. For other movies, the gallery had different lanes where the narrative took a different turn depending on the path one chose. “I am sure this will happen to fictional content too. At the end of it, you probably meet at the exit gate to discuss what film you saw and what happened to your characters. It can only get more and more inventive… you can’t even imagine what can happen next,” says Desai, who has directed the 2014 Marathi film Nagrik and ZEE5’s ongoing series, Hutatma, which is based on the Samyukta Maharashtra movement. Looking ahead and emphatically stating what the next decade has to offer in terms of entertainment would be making a wild guess. Stakeholders, however, are excited about the endless possibilities in store. “Over time, there will be more individuals having access to a connected screen. It will allow you to have personalised communication, conversations and recommendations. We will move from a broadcast world catering to a billion to a billion unicasts,” says Gaurav Gandhi, director and head, business, Amazon Prime Video India. Advancing technology will also play a big role in the evolution of the sector. Manish Aggarwal, business head, ZEE 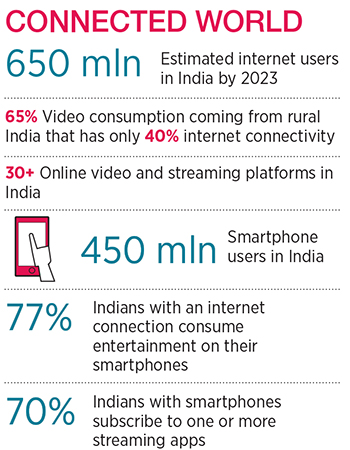 5 India, says he does not want to be bold enough to take a bet on what the scene would be in 2030. It’s still early days of virtual reality, and one is yet to warm up to GigaFiber and the concept of smart home devices like Amazon’s Alexa and Google Home. Plus, there’s a lot happening with Internet of Things. “You will be able to own and understand the consumer a lot better through artificial intelligence and machine learning. There’s going to be a rich set of data available to take informed decisions,” says Aggarwal. Increasing smartphone penetration, the arrival of smart TVs and rural India leading the way in video consumption because of cheaper mobile data have allowed shows to flourish in multiple languages. While technology will automatically usher in relevant changes, the emphasis on quality will remain constant. “Content is the emperor. The importance of quality cannot be underscored enough. The consumer is actively seeking out compelling stories,” says Vijay Subramaniam, director and head, content, Amazon Prime Video India. It’s not just the screen that has shrunk for the audience but the world has also come closer because of diverse stories being told on streaming platforms. “I see global and local working in tandem. While more content will go global, more people will also be immersed in local stories,” says Gandhi. Going ahead, explains Subramaniam, the focus will be on authenticity. “The genuineness of stories is becoming more important than ever before. The more authentic they are, the more global they become,” he says. Desai points to the paradigm shift that took place when television became a certainty in every Indian home. Filmmakers found a new medium to tell stories that they thought lent itself to the TV format more than celluloid. So, Shyam Benegal made Bharat Ek Khoj (Discovery of India), a 53-episode drama, for Doordarshan, while Govind Nihalani made Tamas. Similarly, filmmakers today are using OTT platforms to tell stories more suited for that medium. So we have the likes of Sacred Games, Inside Edge and Made in Heaven. “OTT is not yet tainted by the commercial framework. It gives you the freedom and flexibility that your art wants you to experiment with. We are at an interesting junction where there is a possibility of this medium opening up to a lot of new content,” says Desai. The concern that availability of films on streaming sites within months of their release will kill the movie-going experience is unfounded, according to experts. They point to the roaring business of Avengers: Endgame which recently became the highest grossing film of 2019 and the love received for the two-part magnum opus Baahubali, indicating that certain stories can come alive only on the big screen. “Movies are thriving. India is an ‘and market’, not an ‘or market’… all windows of showcasing content have a place and there is a role for all of them,” says Gandhi of Amazon Prime Video India. ZEE5 India’s Aggarwal concurs. “Movies are getting their due justice. There will always be content that people will want to watch in theatres, though consumers are being more selective about that,” he says. The resentment evident from Spielberg’s stand is not something that Gandhi or Aggarwal have experienced. Desai, however, explains that the bitterness, especially among veteran filmmakers, is natural. “When the medium changes drastically, it threatens to jeopardise your skills or the art that you have learnt over time,” he explains. Desai believes that India is at the crossroads of entertainment consumption, and that OTT platforms are an enticing bet if used well. Agrees Subramaniam. “Convenience and entertainment on demand are here to stay.” The entertainment world is at an inflection point. While the audiences have enjoyed the ride so far, the plot is likely to get only better in the future.