With trainers powered by artificial intelligence, apparel with data-collecting sensors and workout equipment connected to the cloud, India's fitness technology market is just getting bigger 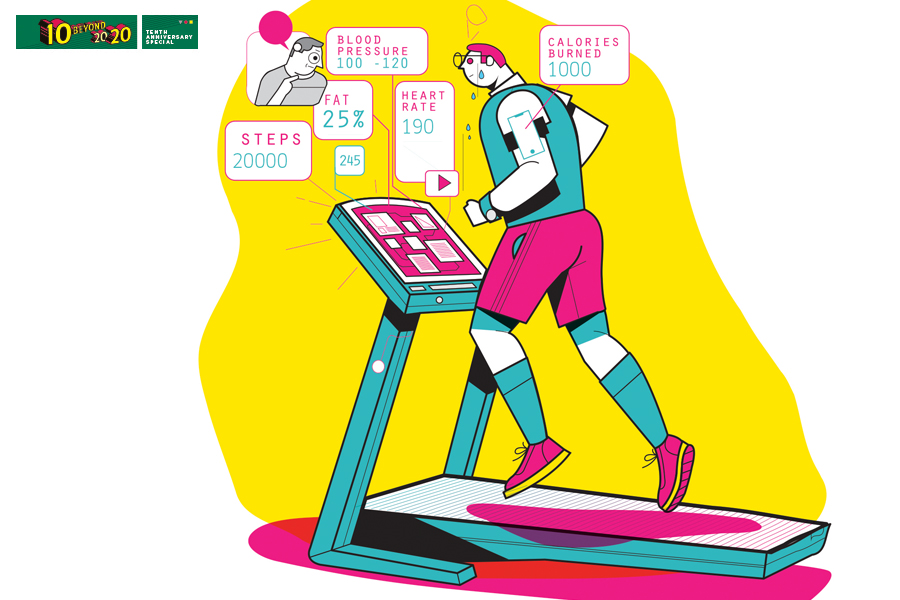 Since March, every few hours, Ria has been reminding Nilesh Shirvadkar to drink a glass of water. She has been curating all his meals, mindful that the 40-year-old suffers from cholesterol and hypertension. She has even been setting daily reminders for him to workout, challenging the Mumbai-based IT engineer to burn more calories and stick to his fitness goals. At the outset, Ria seems like any other wellness coach. Except that Ria is not human.

She is a voice on Shirvadkar’s smartphone that is powered by artificial intelligence (AI). She was created last year by Bengaluru-based HealthifyMe, after the fitness startup studied billions of data points on exercise and food, tracked on the basis of inputs given by users, and messages they exchanged with their respective trainers/nutrition coaches.

According to Tushar Vashist, co-founder of HealthifyMe, while Ria was initially only an assistant to the 500 human fitness experts on the app, the number of customers turning exclusively to Ria for guidance has increased from 5 percent in 2018 to 54 percent today. “Ria became the dominant engagement for people,” says Vashist, whose startup has 100,000 paid users and raised a total of $18 million in funding last year. Its roster of investors includes IDG Ventures India, Inventus Capital, Blume Ventures, Russia’s Sistema Asia Fund and Silicon Valley-based Samsung Next.

Vashist explains that AI has connected startups to a profile of customers who approach fitness differently. “People who can afford human coaches online are in the age group of 30 and 50. Ria-based Smart Plans, starting at ₹299, are typically bought by people between 20 and 35 years of age, who might not have ₹1,000 per month to spare for a human trainer,” he says. “AI is driven by the millennial market, which is comfortable using next-generation technology on their smartphones.”

For customers like Shirvadkar, AI also means accessibility. “Unlike human coaches who are only available during specific time slots or on appointment, AI is with me 24x7. No matter what fitness query I have at any point in time, Ria will solve it for me then and there,” he says.

The fit-tech boom
The one-size-fits-all is a myth. At least as far as India’s fitness industry is concerned. Until a few years ago, the sector was unorganised and fragmented, with no definitive structure to its product and service offerings. Then, with a stronger wave of active lifestyle awareness among people, the fitness space has been disrupted by entrepreneurs using technology catering to the emerging community of health-conscious Indians.

According to the 2018 ‘Indian Habit of Being Healthy’ report by research firm RedSeer Consulting, there are 90 million Health Conscious Individuals (HCIs) in India (defined as people with high health awareness, who take fitness and diet control seriously). It is estimated that they will help the country’s preventive health care segment reach a size of $100 billion by 2022, up from $55 billion in 2018. The largest share of this pie will be occupied by fitness at 27 percent, preceded only by healthy consumption at 30 percent. The number of HCIs is also poised to increase to 130 million by 2022, driven by increasing affluence, rising rate of urbanisation and improving access to technology.

The resultant disruption in fitness has increased not only the size of the industry, but also the variety of its offerings. According to statistics portal Statista, as on 2019, India’s fitness industry is valued at an estimated $1.6 billion. This market is divided among distinctive segments such as fitness centres, mobile apps, digital discovery platforms, wearable technology, food, clothing and smart apparel.

“There are over 23 million daily Google searches from India around fitness. This means that people have the intention of being fit and healthy, and there is high demand for the discovery of fitness services,” says Neha Motwani, founder, Fitternity, a fitness services aggregator. According to her, one of the opportunities drawing entrepreneurs to this sector is the fact that it remains largely unorganised, and needs technological interventions. “There are about 24,000 fitness studios in the country, but only 5 percent are organised with an online presence and easy accessibility.”

Motwani’s Fitternity shares space in the industry with similar ventures like Gympik, Growfitter and Fitpass. It helps people opt for a pay-per-class module across activities ranging from gymming and CrossFit to zumba and yoga. “Our surveys indicate that even though fitness awareness is high, most Indians workout just four to six times a month. So, expensive yearly or half-yearly gym memberships go underutilised,” explains Motwani, whose startup has tie-ups with 10,000 fitness studios and a user base of 400,000 people. “This [pay-and-play model] allows people to not overspend on fitness packages and have flexibility of workout schedules.”

With ₹54 crore in annualised sales, Fitterity had an operational break-even in January this year. The startup raised $2 million in funding in 2017 and is in the midst of closing a Series B round. This, Motwani says, will be used to scale up supply, manage large-scale inventory, launch group classes that can be livestreamed and leverage Internet of Things (IoT).

“Virtual coaching or live-streaming of sessions will enable users to join a specific workout irrespective of which part of the world they are in,” she explains. “Machine learning and IoT will help people control their gymming experience—predict the best class to take, enable users to pre-book specific equipment and offer step-by-step guided workouts. We can also have cloud-connected devices that will store a person’s fitness and health information in one place.” 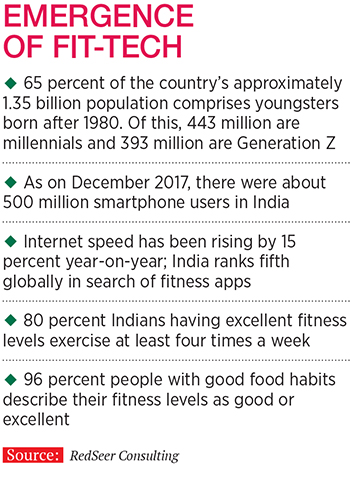 Entrepreneurs agree that AI makes fitness infinitely scalable, requires less investment compared to a conventional gym and has faster returns on investment. Jitendra Chouksey, who launched fitness platform Squats with just ₹90,000 in 2016, says that they use AI and data analytics to gain physical, social and behavioural insights from a customer based on their interactions on the platforms. “This helps us to curate customised fitness packages for every individual.” Squats, a Pune-headquartered profitable bootstrapped venture, currently has 170 trainers catering to 70,000 paid subscribers, with a total user base of 0.5 million. Players like Cure.fit, launched three years ago by Myntra co-founder Mukesh Bansal and former Flipkart top executive Ankit Nagori, are channelising innovations to keep away the monotony that is traditionally associated with gymming. The startup—which aims to create a holistic preventive health care ecosystem with fitness chains (Cult.Fit), food delivery platforms (Eat.Fit), mental health platform (Mind.Fit) and diagnostic centres (Care.Fit)—is likely to raise $75 million in funding led by Accel Growth and Chiratae Ventures, The Economic Times reported in April.

Shamik Sharma, technologist at Cure.fit, says that their expansion plans involve creating offline centres that promote fitness as a social, group activity, and exploring the potential of Tier-II and III cities. Apart from standardised workout modules, trainers use customised apps to record their inputs and activities. “We receive data from cameras across the country in one big monitoring centre, and use computer vision and AI to auto-detect if procedures are happening as required. Using data to strengthen offerings and back-end infrastructure sets technology startups apart in the fitness space,” he says.

It’s all about the data
Experts believe that availability and abundance of data will be the industry’s biggest disruptor. According to Vishal Gondal, founder of fitness technology venture GOQii, even though India continues to be a reactive industry—with people joining gyms only to correct a lifestyle disease or illness—the availability of immediate data will make it more proactive. Today, while GOQii’s wearable devices use AI to measure heart rate, footsteps and blood pressure, an ECG tracker is expected soon. “In a few years, health data will be ubiquitous, with parameters being available on-demand,” says Gondal. “Your wearable fitness device will even measure glucose and lipid profile. There will also be non-invasive sensors or implantable chips that can draw diagnostic data from the blood.”

Chouksey of Squats agrees that the future will be about fitness reaching remote locations, with apps tracking and guiding every step of the workout routine. To that end, Squats is in the patent-filing stage of developing smart fitness apparel with motion sensors to measure stretch, temperature, strain and pressure. “With the power of AI and machine-learning, the sensor technology of your activewear  will become a personal trainer,” Chouksey says.

Fitness apparel brand HRX, co-owned by actor Hrithik Roshan and Exceed Entertainment, is also walking on a similar path. Their upcoming project called The Connected World will look at every yarn of fabric and all product offerings from a tech integration perspective. “We want to tie in all products available in our portfolio to understand technology,” says Pallavi Barman, head of marketing and operations, HRX.

“Right from your apparel and footwear to your hydration system and smartphone, everything will be connected at all times, giving you regular inputs to improve overall fitness goals.”

Startups also plan to monetise data collected via apps. Motwani of Fitternity calls it the API-fication of fitness. “This will give us an opportunity to leverage our marketplace leadership and supply inventory to create additional revenue streams. For instance, through a B2B2C model, we will collaborate with insurance companies who will incentivise premium amounts for customers depending on how fit they are,” she says.

Fitternity currently has a collaboration with Aditya Birla Life Insurance. Talks are under way with three other players. Going a step further, GOQii is partnering with pharmaceutical companies, which help doctors understand a patient’s health condition better based on fitness data collected on the GOQii platform. “The future of exercise is at home or on-premise. And exercise will be looked at through diet, nutrition, meditation, stress management and sleep,” says Gondal. Sharma of Cure.fit warns that while AI interventions will personalise fitness, making data available to third-parties without a customer’s knowledge might become a privacy concern.

Finally, tech-integration comes at a cost and India is a price-sensitive market, reminds Kamal Punwani, chief strategy officer, HRX. He believes that for fitness products and services to become mainstream, they have to be delivered at a certain price, with the right value proposition. “Technology inspires people to work harder. It has created athletes out of common people and has established an overall fitness trend in India. As far as more mainstream usage of technology in fitness is concerned, we are just at the start of something exciting.”